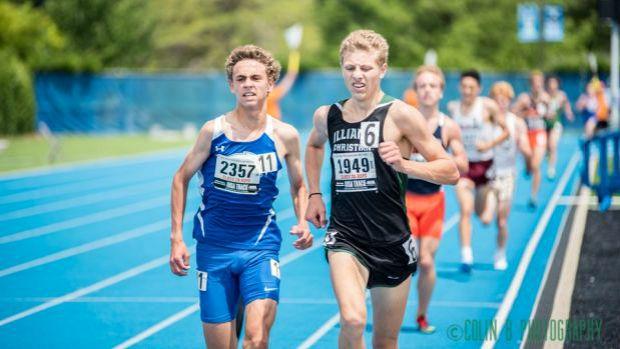 Subtraction means addition and that math means good news for the 2A boys classification. This simply means the subtraction of guys who competed in 3A for track are now in 2A... and there are plenty to choose from. This could be one of the deepest fields in this classification since its inception.

Last year's 3rd place finisher at 2A XC State (14:37) will seek to win the state title in his junior year after a disappointing track season. Although his 9:32/4:33 may not be the fastest returning track timers in the state, do not forget that he is the top returner in cross country! Expect him to be a contender in November.

Part of what makes Mahomet Seymour so dangerous is at the front of their deep pack is a reliable frontrunner, Alex Keeble. Keeble finished fourth at Detweiller last year (14:49) and second in the 3200 at state in the Spring so he has had enough with the close finishes. His track PRs are underrated at 9:23/4:28 He is more than just another strong contender for the individual crown.

Could the youngest of the Yunk brood become the best? Eryk is prepared for the final season of his strong career at North, and showed as such by finished sixth at the Detweiller at Dark race with a 15:02. His 14:53 was good enough for seventh last November and his 9:20/4:21 show his track season was strong and consistent until at disappointment finish outside the podium in the 3200 at state. July. "This summer Eryk has had the good fortune to train with his two older brothers, Tyler and Bruyn," says his coach and dad Troy Yunk. "I have seen him become a lot more focused."

The first of two who comprise the Hornet's killer bee like 1-2 combo. Nodus finished 8th in 14:53 at State last year and was 9th in the 3200 in 2015 (in the 3A meet). His track PRs are 4:22 and a blistering 9:17 run at the Downers Grove South Sectional. Training with Roman Drabchuk this summer has been crucial for Nodus, and coach Jim Dickerson says he is better than he was last year.

It just don't stop with the Beattie family. Luke was barely out of diapers when his oldest sister Elise Beattie started performing well in running nearly ten years ago. Now, it's Luke's turn. The 2014's 10th place finisher was Luke Beattie (14:54). Beattie ran a strong 2015 track season, highlighted by a personal best in the 3200 in 9:22 at the Fox Valley Conference meet and then a third place finish in the state 3200 final. Beattie is a two-time state cross country All-Stater, and we fully expect that to become three at the end of this year.

Jack Aho finished "just" 11th as a sophomore in 14:54 at Detweiller last fall. But his breakout race came at the 3A level in track, when he passed several runners on the final straight to finish 3rd in a personal best 9:12. Aho has the fastest 3200 of all returning 2A runners and therefore, may be the most dangerous. He must also lead a Rams squad who has the potential to trophy at Detweiller as well this fall.

Cole is one of several strong juniors in the Fox Valley Conference this year. He ran 14:57 to finish 13th at the cross country state meet last year, and finished second is a very fast 3A Guilford sectional 3200 race in 9:18. Barkocy's summer was spent with several other talented runners in training, so be prepared to see him at the front of most of his races this fall.

Saavedra is the top returning runner from the CPS (finished 2nd at City champs last year) and finished 15th in the state with a 14:58, and also finished 56th at both the Footlocker and NXN Midwest Regionals. His 9:29.28 was good enough for fourth in the 2A state track meet for 3200 as well. Saavedra has the potential to finish as high as the top 5 in the state cross country meet this year.

Landis, one of the quicker juniors returning from the western part of the state, was the 19th place finisher at Peoria last year (15:01) and has track bests of 9:47 and 4:36. Although his track season ended early in 2015, he will hope to finish in the top 30 at XC state for the third straight year, and possibly run for a top 10 spot as well (Landis finished 30th at the 2013 XC state meet as a Freshman). 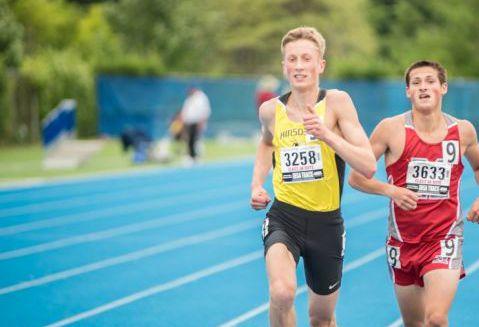 The second runner listed here as part of Hinsdale South's strong returning 1-2 punch is Drabchuk. Drabchuk made incredible strides during track last season in the 1600. Entering the season with a personal best of 4:41, he brought that best down to 4:32, 4:23, 4:20 and eventually 4:15 at the 3A state final in the 1600 to finish 6th. Now, a long summer of training with Nodus will hopefully pay dividnds for last year's 22nd place finisher in Peoria. Coach Jim Dickerson: "He is in tremendous shape and is very confident.

One particular runner who has captured the attention of several opposing coaches, especially those in the middle part of the state, is Jake Gillum. Gillum, is already a two-time qualifier for the state meet with Metamora teams and finished in the all-state range last year in 23rd (15:02).

Yet another fast junior from the Fox Valley Conference: Pajak is last year's 24th place finisher from the 2A state meet (15:04), but really made strides during the track season, doubling 9:18/4:25 at his conference meet. He will hope to avenge a disappointing state track appearance by qualifying for his third straight cross country state final (70th in 2013).

In his third straight cross country state meet appearance, Meyer finished just outside of All-State honors in 27th (15:11, 143rd in 2012 and 85th in 2013). Meyer has led Chicago U-High for several years and the two-time defending ISL conference champ will be aiming to crack the top 25 for the first time in his senior year. Meyer enters the year with 9:37 and 4:25 personal bests.

Warren's track performances during postseason competition at the mid-distance events were truly eye-opening. A consistent season of quick 800s was topped off at the 3A Normal West Boy's sectional with a 1:52.67, getting him into the state meet where he finished 8th at the 3A level. Then, Warren established himself regionally at the Nike Festival of Miles in St. Louis, MO when he ran 4:12.18 for a full Mile (4:09.89 for 1600). He also won the quick 1600 at the 2015 Prospect Wanner Knight invite. Warren has the potential to be a dark horse top 5 candidate with his dangerous middle distance speed.

A new era begins at Yorkville, and now instead of the Hoffert twins leading the Foxes, it will be Trevor Wills. Wills finished 29th in 15:13 at Peoria last year (65th in 2013) and ran 9:40 and 4:34 in a short track season. His season, along with the Foxes', has already started. He finished second behind Chicago Northside Prep's Danny Rosen at his school's home invitational.

Last year's 33rd place finisher at Peoria in 15:21 is Evan Mitchell. He is a qualifier for the 3200. Mitchell's season has also already started, and he finished just behind the powerful Sandburg pack at the Southwest Suburban Conference Preseason meet this last week.

Jones and Robleski very quietly provide a strong 1-2 punch for Wheaton Academy and both have the potential to make All-State this year. Robleski was the top runner for Wheaton Academy most of the year last year but did not run at the state meet (63rd at the 2013 state meet, 6th at the 2A Wheaton Academy sectional). Jones finished 35th last year in 15:22 and qualified for the 3200 at the 2A level (also finished 99th at the 2013 state meet). Training together has been good for the two runners and coach Chris Felinski believes both can be all-state.

Battaglia will be a big part of a good Grayslake Central team this year. He returns the 37th finisher from 2014 and the #2 runner for the Rams. Coach Jim Centella: "Jack should prove strong for us once again come November. His summer training has been inconsistent, but he has a great ability to gain fitness throughout the season and is always at his best for the "playoffs"."

The triplet brother of Jack Aho, Matt, is running cross country for the first time as a junior but has already proven to have strong distance capabilities. Matt ran 9:39 and 4:33 in track, and coach Jim Centella believes Matt to be the likely #2 for Central this coming season. We have seen twins run well together well at the 2A level in the recent past… don't be surprised to see it again.