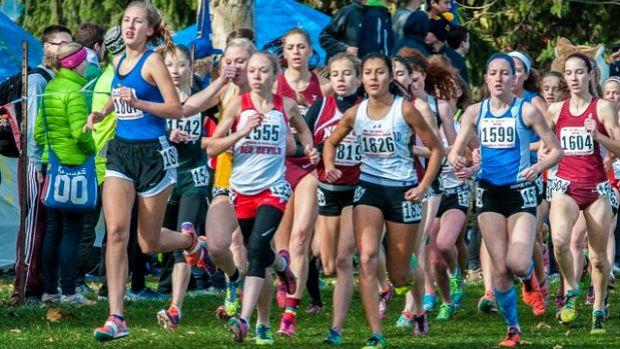 Who wants it the most? Nope this is not the Miss Universe Pageant contest... it's cross country!

It seems like the beginning of every season the expectation of something in the all-time range is forecasted. For the 3A girls, this fall cross country season, unlike most is filled with uncertainty and optimism. The uncertainty is the high graduation rate will create some opportunities for some returners to really step up and shine. This could also be optimism for the same lot. Regardless of the circumstances, Fall 2015 should be a great season for cross country fans.

Let's take a look at some key players:

Judy Pendergast (Sr., Naperville North)- 9th place in 2014 state xc, state 3200m champion; 10:34.55/4:56.53/2:17/17:06; grossly underrated xc season despite top 10 finish at state and solid run to Nike Cross Nationals with a 22nd placing. Pendergast had a monster track season that is sure to roll back over this fall. If all goes well she should be looking at a boatload of personal accolades. The universe is the absolute limit for Pendergast this fall.

Kelly O'Brien (Sr., Palatine)- 3rd; 16:55/10:57/4:54/2:12; probably the most complete runner in the state of Illinois when you consider the range that O'Brien has. She has anchored the team's 4x800 and 4x400 relays in championship races. O'Brien is probably equipped with the best leg speed of any girl in Illinois. Although she starred mostly as a mile this past spring, she ran the 3200m once in 10:57 on a small 160m indoor track. She clearly could have been among the elite had she taken the event more serious. The expectations this fall is to become that duo elite runner/team player. It can be done. The Pirates fans will be very please this fall with O'Brien.

Audrey Ernst (So., St. Charles North)- 13th; 4:58/17:09; last year's big surprise came out of the gate with all top five or better meet placements up to the state meet. The track season was also a good one for Ernst. North Stars coach Shari Hayes expects another banner year from her standout runner.

Rachael Lau (Sr., Plainfield North)- 49th; 10:40/17:16/5:10; the front running Lau has learned her to be more patient as a runner last spring in track and the results were very fruitful. Let's hope her final cross country season can go accordingly over three miles. The ability to reach into the sub 17:00 territory is definitely there.

Meagan Biddle (Sr., Hoffman Estates)- 53rd; 4:59/10:42/17:50; Coach Kirk Macnider has high regard for one of the best runners under his guidance. Biddle has produced some great times but all that is needed to complete the deal is an all-state medal on the grass.

Ashley Tutt (Jr., Minooka)- 6th; 10:54/17:01; Minooka as a program was widely overlooked and Tutt was no exception despite great production. There is no way she will be overlooked this fall entering upperclassmen status. Tutt is a dark horse candidate for the individual title in November.

Brooke Wilson (Jr., Prospect)- 24th; 17:19/10:47/4:59; a much better runner now than she was at this time last year. Wilson potentially could be the athlete who finishes in the top five when it is all said and done.

Lindsey Payne (So., Glen Ellyn Glenbard West)- 5th; what could it have been for Payne had she stayed with running full time? She ran 5:09 and 10:56 indoors before devoting the rest of the winter and spring to soccer. Payne could the remedy to an ailing Lindsay Graham.

Jocelyn Long (So., Barrington)- N/A; 17:44/10:44/5:08; a missed opportunity in qualifying for state xc sparked Long for the track season that resulted in some wonderful results and an all-state performance in the 3200m. Long should be among the elite in the MSL this fall.

Sarah Schmitt (So., Naperville North)- 30th; 17:06/10:50/5:09; Schmitt will be a compliment to Pendergast this fall in terms of front running status. Coach Dan Iverson has a strong pedigree of keeping his athletes out of sophomore slumps.

Claire Hamilton (Jr., Naperville North)- 14th; 17:09/10:57/4:57/2:15; part of that great trio that the Huskies have. Hamilton can be as good as anyone in the state including her teammates Pendergast and Schmitt. Hamilton was on the state winning 4x800 relay.