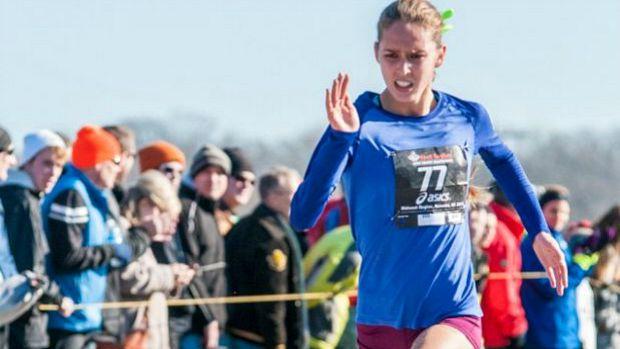 Don't be fooled by the sweet smile of Maryjeanne Gilbert. She has a mean streak when it comes to racing cross country (Colin Boyle photo)

The 2A division seems to be a mix between the known and unknown when it comes to cross country. For one person in the name of Maryjeanne Gilbert, she appears to be the odds on favorite as the top runner from beginning to end. Gilbert was the top overall runner in Illinois last season and very well could be again this fall. But who else out there is of quality stuff and worthy of pre-season attention? Let's take a look at some names:

Maryjeanne Gilbert (Sr., Peoria Notre Dame)- Defending State Champion, Footlocker All-American, State 3200m champion; personal best of 16:12 for three-miles which is the second fastest ever ran at Detweiller Park and in Illinois for that matter. Gilbert clocked a 10:34.36 for 3200m which was the fastest time for an Illinois girl in 2015. She is "Target #1 in Illinois this fall on a course near you!

Maryclare Leonard (Jr., Chicago Marist)- Leonard drops down from 3A where she had tremendous success on the grass and track. Leonard placed 10th last year at the state xc meet with a time of 17:01; it was that 11:04 on the track that is a sign for major success in Class 2A this fall.

Summer Pierson (Sr., Yorkville)- The reports say she is back in full strength after completing an entire school calendar year healthy. Pierson could wrestle the reins of the team away from Alexis Grandys and become the replacement of the departed Skyler Bollinger (now at Great Oak, CA)

Alexis Grandys (Jr., Yorkville)- Last year's xc runner-up seems to be less in stature since last fall. Yes, she had a solid track season but not a monster one like some pundits expected. But like a Viper snake she can strike that killer bite into opponents. But then again it is hard to argue against

Jenna Lutzow (Jr., Belvidere North)- Lutzow's track season expectations was kind of like Grandys' in that heavy expectations were expected. Lutzow placed 3rd in xc state last year and if all goes well after a solid season of training, we could see the same production that produced 17:15.

Kortney Schardt (Sr. Lake Villa Lakes)- One of the premier top distance runners in the northern part of the state over the past three years will be back at it one more time. Schardt took 7th last year and appears to be on target yet again after producing a solid Detweiller at Dark effort in 17:50 back in July. Schardt also qualified in the state 3200m this past spring in Class 3A.

Miranda Kruiswyk (So., Dunlap)- Not much was known about this kid through her freshman year of cross country. She did run 18:13 and placed 33rd at state but it took nearly half a year later in May to garner attention. Kruiswyk fought off several other performers to capture second place in the state 3200m. That awesome performance appears to have driven Kruiswyk to want more this season. She recently ran a solid 18:30 at the Detweiller at Dark meet in July. Watch for this darkhorse runner this fall.

Vivian Overbeck (Sr., Vernon Hills)- The two time all-state xc runner should be one of the very elite runners this fall. Overbeck has had tremendous success in all facets of her high school career. Unlike a lot of runners who run well as freshmen and then fall off by the middle of their sophomore years, Overbeck has remained consistent. She earned an all-state medal in the 3200m last spring. So expect the Cougar to be among the key runners in 2A.

Madison Ronzone (Sr., Aurora Rosary)- Perhaps the state's most improved runner over the past season regardless of classification. Ronzone has positioned herself as a miler who has clocked 4:57. Now, let's see if she can move into a premier harrier this fall. The signs are there and it is only a matter of time before the rest of the state realizes that she is one to watch closely.

Karina Liz (Sr., Aurora Central Catholic)- One of the state's premier 800m runners can also run well on the grass. Liz has competed in three state xc finals including a third place finish last year. Her best of 17:37 should drop a bit this fall.

Kate Jacobs (Jr., Woodstock)- Jacobs missed an all-state medal by a second last year and that should be motivating enough to be well above the 25th place threshold; placed 4th in the state 1600m and also clocked a solid 11:04 3200m in limited action.

Brianna Bower (Sr., Maple Park Kaneland)- It is a surprise that Bower has never earned all-state honors in cross country in her stellar high school career. But yet she has managed to pull in two all-state medals as a track competitor. It would be impossible to think that she would have travel copping a top 10 finish at Detweiller in November when she has blazed 11:15 or better several times within the past year.

Maddie Dearborn- Dearborn left the homey confines of Yorkville to IMSA after her freshman year because of its sensational academic program. But after one semester in Aurora she decided to return back to Yorkville. In the brief time away, she was able to qualify for the state xc meet placing 81st. Not exactly the performance she was expecting. But back at Yorkville she did qualify for the state track meet in the 4x800 and 1600m races. Yet again she appears to be back after running 18:38 in July at the Detweiller at Dark meet.

Lauren Whitehouse (Sr., Mahomet-Seymour)- Whitehouse had a very good junior year with two all state performances on the grass and in the track arena. She should be among the top tier runners this fall.

Kara Martin (Jr., Herrin)- The 28th finisher in last year's state final went on to have a solid track season qualifying in the 3200m and 1600m. Martin took a gamble by dropping the deuce to focus on the mile and it paid off as she earned all-state honors with a fourth place finish in 5:08.67. She should be in line to have a great cross campaign and improve on her 18:23 personal best.