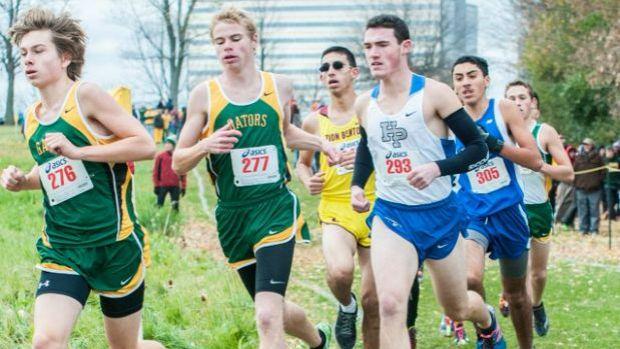 The 3A portion of Boys Cross Country preview session is now here! We will be taking a look at the top 30 3A Boys in Illinois, as well as some of the other teams who might crack that top 30. These rankings take many things into account: first, the strength of returning runners and their times. The heaviest priority is placed on recent 3200 PRs and recent 3 Mile XC PRs at Detweiller or courses known to be longer than Detweiller. 1600, 800, and other 3 Mile times are also considered. The progression of runners over their high school careers, the depth of the team, and historical team success and repute are also factors for this rankings. Remember, rankings are just that: rankings! There are many races to be run this season and the rankings at the state meet are what count. Once again, many thanks to all of the coaches who have helped contribute to this preseason report!

Raymond's outlook: The Huskies were the 2014 St. Charles Sectional champions and finished 7th at state, finishing a very consistent season. However, they return just one of the runners from last year’s team, junior Emerson King. King will lead a gaggle of Naperville North runners who have run in the low 16s, but who will have to improve as a pack if they will run as well as last year’s team. The Huskies look to qualify out of their Sectional once again, but will surely want to make a strong impression on the state scene. Coach David Racey: “We only have one returner from the state meet last year. I am very proud of the others that have worked very hard and have made themselves varsity caliber runners. Their improvement has been tremendous.”

Raymond's outlook: Heading up Plainfield North’s squad is senior Jack Sebok, who finished 55th last year and will be in position to compete for All-State this year. In the words of coach Derks: “Jack Sebok is our unquestioned leader and has risen the bar for not only himself, but for current and future runners at PN. He is ready to end his high school cross country career in a big way, and turn some heads this fall.” The Tigers compete in the tough Southwest Suburbs sectional and if they want to be more competitive, Sebok will need help from the pack. Ben Otstott, Brenden McGath, Walker Wells and James Suchy have all broken 10:30 and can be strong pack runners. Coach Derks asserts: “We know that our success will be determined by how much our 2-7 runners can pack up and move closer to Jack. We still have work to do and a number of guys who could compete for the spots.” We will watch how the pack mentality develops at North, especially on a team who will be returning almost its entire varsity lineup in 2016.

Raymond's outlook: The storied Pirates team missed the state meet for the first time since 2003 last year, finishing 12th in a very deep Schaumburg Sectional. Brian Leonard had a strong spring, running 9:23 and 4:22 and is Palatine’s #1 this year. He is a returning varsity runner along with Nate Izewski, Zack Michael and Dan Trejo. “Summer training has been consistent and oriented around team work. The guys are putting in big miles and working hard together,” reports coach Quick. This team will be gunning for a state spot as well as an MSL victory and they will need a pack of 10:15-10:30 runners to step into varsity scoring roles; namely, Ben Kontney, Evan Eckels, Curt Kontney and Koby Theobald. Coach Quick: “We are focusing on being a true team top to bottom and sacrificing a little bit each day for another athlete on the team.” Palatine’s program strength suggests that they will not have two off years in a row. They may be ranked 27th preseason, but don’t expect that ranking to stay the same. “The team is really motivated and has enough talent to get it done,” says coach Quick. “It is starting to look like a classic Palatine team. Hopefully it gets classic results.”

Raymond's outlook: Hersey took home at top 10 finish last year but only return three of the runners from 2014’s Detweiller team. Jacob Krupa is the team’s fastest Cross returner, and will be the head of the pack along with Sam Svienty and Kevin Paton. Hersey has not missed the state meet since 2011. If the Huskies want to continue that streak, they will need to develop a tighter pack and they look to Dan Gerardi, Andrew Hyndman, Ryan Theisen and Quinn Cunningham to help them out. And this is a program that has proven they can do it.

Raymond's outlook: In 2014, Marmion missed qualifying for the state meet last year, finishing just one point behind Huntley. In 2015 Andrew Burroughs and stud sophomore Michael Ronzone will look to lead a team to change that fate this year, especially as teams in front of them have less returning. They will hope to get pack help from Andrew Lifka, Charlie Zimmer, Christian Surtz and Jimmy Milder. Coach Klatt has high praise for his runners: “WE have come close to qualifying for the 3A State Meet the last two years and one of our outcome goals is to accomplish that feat this year. We have great potential as a team to compete at the highest level in the state…Our primary challenge as a group is to continue to focus on the process as opposed to the outcome and respond instead of react to adversity.” Last year Marmion faced considerable adversity at sectionals. Now it is time for them to react.

Raymond's outlook: The Hilltoppers were the surprise team at the 3A State Meet last year when they turned heads finishing 5th just 28 points from a trophy spot. They return seniors Eric Neumann (39th), Simon Peterson (100th) and sophomore Kalen Yeager (147th). Look for Nick Lombardo, Colin Griffin, Emmit Billings and Will Buechner to step up into scoring roles and help West compete in the logjam of a sectional at Lake Park. Coach Nugent will be looking to find chemistry between the parts of his team: “We lost a lot of great seniors from last year’s team, so this year’s squad will be a mix between young and older runners. We have had a solid group of underclassmen step up their training this summer, [as well as] a solid group of senior leaders who have state meet experience.” In a Lake Park sectional which is nine teams deep, the Hilltoppers will want to ride last year’s momentum to Peoria this year.

Raymond's outlook: Hoffman Estates ran a very young team that held off Buffalo Grove for 5th at Schaumburg and finished 24th at Detweiller last year but returns just three of their top six varsity runners in 2015. This year presents new challenges for Hoffman Estates and coach Mariano, especially now that teams like Buffalo Grove, Palatine and Crystal Lake South will be much stronger after finishing outside of state qualifying. This means Bryan Gamboa, Matt Peterson and Shiv Patel must establish themselves as a strong front running trio while Nathan Otto, Alex Makrounis and Ryan Greenwalt will look to lower the team scoring split. Coach Mariano knows what will be needed this year: “The returners do have a lot of Varsity race experience, there are talented guys on the roster, but it will be a challenge…” “The seniors must take the reins, becomes the emotional heart and soul of the team, and they must perform at a [high] level week in and week out.”

Raymond's outlook: A tie with York at the Niles West Sectional gave Ignatius the stressful way into Peoria, where they finished 14th. The Wolfpack lose a lot of senior leadership and return just 3 of last year’s state runners but one of those is Dan Santino, the 5th place finisher in the 3A 1600 track championship. Behind him are a handful of runners with 3200m times between 10:00 and 10:20, headed by Vince Lewis and Joe Amoruso. St. Ignatius has depth back to the sixth runner with Jack Morgan, Chris Jeske and Lyndon VIckrey but needs Lewis and Amoruso to step up into reliable 2-3 if they do not want to tie for 5th to qualify again in 2015. Coach Ernst: “People are going to think we are a one-man team, and compared to recent past years, we start the season with a lot less firepower. But we think we will surprise people. Our guys have worked very hard through the spring track season and summer, and they know they have standards to live up to now.”