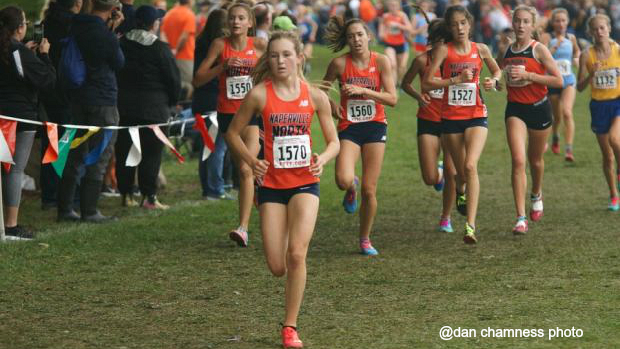 The final girl's race of the day was a treat for those who stayed to anticipate and watch #1 Naperville North open their campaign. How would the Huskies respond against a DEEP field that featured #2 Yorkville, #4 Downers Grove South, #5 Barrington, #6 Batavia, #8 Lyons Twp., #12 New Trier, #13 Minooka, #14 Edwardsville, #20 Hononegah, #24 Lockport?

FTTF allows up to 10 varsity runners per team and there were nearly 40 teams in one race. Add in slop and a course that deteriorated from overuse, you usually get the team who can adapt the best.

Naperville North quickly adapted to the conditions and the competition as soon as the race materialized more than 800m in. By the time the race reached the "Bermuda Triangle" back loop, it was all Huskies. They had favorable numbers all over the place. Senior Alex Morris did not hold back to help her team pace wise according to head coach Dan Iverson. Morris was upfront battling the leaders for the majority of the race. Sophomore Campbell Petersen in her first race in a Husky uniform worked with teams in the first chase pack. There were approximately four other teammates that surrounded her coming out of the back loop. Yorkville, on the other hand, was much more separated from its scoring pack. Despite having four elite front runners, the Foxes have had some issues in connectivity against Naperville North.

The Huskies would go on to win comfy scoring 58 points on an amazing 39-second 1-5 scoring split. There is a reason why they are one of the nation's elite teams. They have low sticks and a deep pack- the 9th runner sophomore Molly Morton would have scored in the top five of every team except second Downers Grove South. The Mustangs continue to run well nipping Yorkville by a point 92-93.

The race to the tape began with a comfy opening mile led by a strong pack. Yorkville sophomore Helena Kleronomos strode through in around 5:32. A fleet of girls continued their assault over the next half-mile before it was finally taken over by Barrington sophomore Molly Fitzpatrick and freshman star Katrina Schlenker of Batavia. The reached the second mile just past 11:00 and it was obvious that new state leading marks were going to occur. The fleet-footed Schlenker slid past Fitzpatrick for the very impressive win in 16:42. It should be noted that Schlenker had run 17:19 on the Detweller course in July. She will be a big name to watch out for as the season progresses.