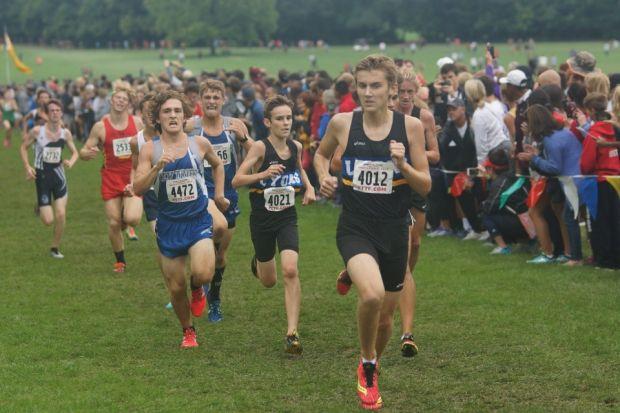 (Storyline by Carson Vittorio)
The last race of the day produced a surprising outcome on the boy's side. Due to the Mike Kuharic Invite at Lyons Twp. HS getting canceled last weekend, it left senior Tommy Brady of Maine South without a season opener this weekend. That is until his coach decided to bring him down to the FTTF and compete against some stout competition. Sadly Brady was sick, but still ended up racing and at points nearly blacked out due to the sickness. Even without one the nation's premier runners, an excellent individual battle formed on the aggressive tactics of Glenbard West senior Rory Cavan. The underrated Cavan vs. the predestined senior Jack Roberts of Downers Grove North were alone in the final clutches to duel it out.  On the final straightaway with about 300m left in the race, Roberts had about a 20-30m lead on Cavan, but Cavan was not going to let all of his work go to waste and take 2nd place. He threw his engine into the sixth gear and took home the spoils in a tremendous personal best 14:24. Not to be outdone, Robert's consolation prize was a slick 14:26- almost 20 seconds in front of third-placer juniorTyler Cushing of Bolingbrook who ran 14:44.
The team battle was great and it ended with out of state power team, Fishers IN (#3 in their poll) walking away with the win scoring 147 points to top the 47-team field. More importantly for our Illinois readership is the fact that #24 Lyons Twp. shocked everyone and placed 2nd in front of the IL#3 team Glenbard West. The Lions notched a 38-second scoring split complete with lead runner junior Jack Ehlert placing 12th overall in 14:59.