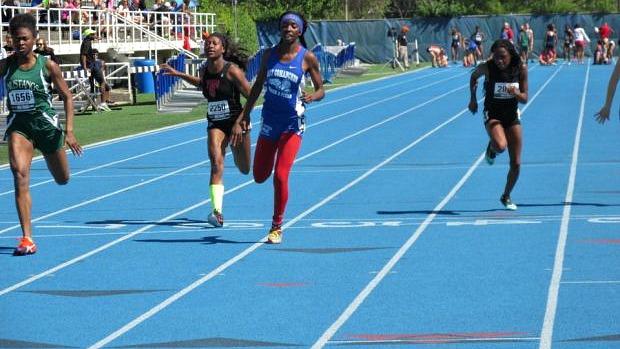 If there was such a change for a reformat of the state championship, it could be now. The IHSA could reconstitute the scoring or elect some other method like individuals vs. individuals or team vs. team apart from the current system. Cahokia won their second consecutive state championship on the strength of two girls. Let's repeat this again. Cahokia won their state championship on the strength of two girls. Despite not qualifying any relays or anyone else not named Mariya Hudson (So.) and Rayneshia Lewis (Jr.), the Comanches scored a whopping 61 points to beat a balanced Chicago Morgan Park (51); Normal University (32) & Springfield Southeast (32) tied for third. Keep in mind this is nothing against the Cahokia program because they have won a title before by slicing the competition in a few different ways. But more against a system that needs updated to suit the needs of the sport.

An assortment of action abounds-

Morgan Park accomplished a major goal on Saturday when they swept the relays. "Coming in here we talked about winning all three sprint relays. If we could do that then we would be in great shape in securing a team trophy," said the crafty veteran general known as Derrick Calhoun. The Mustangs did just that taking the 4x1 (47.92), 4x2 (1:40.74), and 4x4 (3:57.33)- all with precision and dominating fashion.

Jaimie Robinson (So., Chicago De La Salle) did not her steps right for the triple jump in Friday's preliminary round. She had to run the 4x1 relay at the same time her primary event was schedule go off. Robinson still leaped a classification record 39-10.5. On Saturday there would be no prior commitments for Robinson as she spent time locating her approach. In first attempt Robinson ripped down the run way and connected on her dream goal: 40-feet. To be exact it was 40'0" and it was a legal effort which means she can submit for youth national team consideration.

Rayneshia Lewis had the banner day as mentioned in the beginning. Lewis powered by past her teammate Mariya Hudson and prelim long jump leader Madison Meyer (Jr., Carterville) to win with a solid 18-10.75. Hudson marginally improved to third in 17-11.75. Meyer unfortunately stayed stationary with her 18-1.25.

Jamari Drake (Jr., Springfield Southeast) showed why she was one of the most consistent high jumpers in the state indoors and outside. Drake won a tie breaker over Christina MacNab (Jr., Providence Catholic). Her teammate Lunden Henry (Jr.) took him a fifth place medal.

Montini was the top 4x8 team during the indoor season, but what ultimately matters is what happens at the end of the year. Rosary led early and several other teams took turn jockeying around with the lead. Finally anchor Gianna Salzbrunn (Jr.) put the race away with a 2:22.0 carry that propelled her team to victory in 9:30.93.

Chicago Brooks freshman Imani Carothers came into the season low key. Low key to the IHSA scene, but to those who follow the former Glenwood native, she was a middle-school state champion in the 100HH. Carothers ran 14.98 as an 8th grader. So the natural progression was supposed to happen. What wasn't supposed to happen was a victory over Rayneshia Lewis. Carothers, who is 5'8" and plays basketball, fought off Lewis to win in a personal best 14.46 (+2.0).

Karina Liz (Jr., Aurora Central Catholic) went out fast enough to run under 2:10, but the lack of competition did nothing to excite Liz won in 2:15.55- four seconds ahead of the nearest competitor Rachel Hickey (Fr., Lasalle-Peru).

Maryjeanne Gilbert (Jr., Peoria Notre Dame) said he had a "plan" for Saturday competition. She would not say what it was then. The 3200m went out 71, 2:29 for the first two laps. By the time the race entered the first circuit in 3:46, it was obvious that she would be in trouble. After crossing the 1600m in 5:07 and over 100m lead on the field, Gilbert begin to slow tremendously. But no girl decided to go after he, she put things on ice and won in 10:34.14.

Aurora Rosary Newcomers to the big scene Emily Martin (Sr.) and Madison Ronzone (Jr.) surprised a few folks during the indoor season with their prowess in racing. The outdoor season was a replica except they went 1-2 in the 1600m running 4:56.51 and 5:00.14.