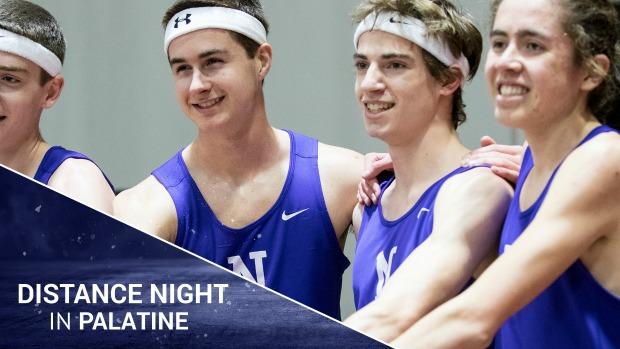 Get ready for a stellar display of distance running on Saturday night in Illinois.

The Distance Night in Palatine, in its third year running, will feature some of the top talent in Illinois and Wisconsin on the track at Palatine High. You can watch it LIVE on MileSplit HERE starting at 8:00 p.m. ET.

Things will start off with feelings that you like-
3200-
This is probably the least stacked event on the card, but this card is so great that it will still be a good race. Watch for the likes of Tim Stevenson (York), Robert St. Clair (Mundelein), and Charlie Nevins (Whitney Young) to be leading the pack. Stevenson was a nice surprise for the dukes during the Cross- Country season with Charlie Kern out for most of the season with a illness. Stevenson always seemed to push his teammate Sean MacGregor when his team needed them most. Stevenson last ran the 3200m at West Suburban Silver Conference meet where he took 4th place with a 9:32.92. St. Clair has been having a rough year during track. His PR's this year are a 4:39.62 1600m and a 9:48.99 3200m. St. Clair is needing a breakout race at Palatine, Robert had one last year when he ran a 9:36.35 3200m at this meet last year. Can lightning strike twice? Nevins is a dark horse. When you think of Whitney Young distance running you think of two runners: Clayton Mendez and Sam Rivera. Nevins should get looked at more! The junior was an All-Stater in XC this past fall taking 25th place at the 3A State Championship. Nevins is coming into Palatine after winning the 3200m at the Lane Tech Pizza Invite with a 9:39.20. Other big names to watch are Spencer Smith (Alleman), Collin Luell (Zion-Benton), and Andrew Pilat (McHenry).
800m-
Anyone could win this heat. Everyone is within three seconds of each other. The runner to watch in this race could be Adam Swanson (Dundee-Crown). Swanson is only in his 2nd year of distance running and ran XC for the first time this past fall and boy did he impress people! He ran a 15:05 at the 3A State Meet to take 50th. That is very impressive for your first ever xc season imagine what he could be running if he did it his freshman and sophomore year! He has run 1:58.61 indoors and will be looking to drop into the 1:55 range. He was expecting to race the current his #1 Rival in his sectional this year, Adam Kennedy (Batavia), but Kennedy just slipped onto the main card. He will probably want to go out fast to get that 1:55. It will be very interesting to see if anyone will go with Swanson. Other big names to watch are Shane Yamco (Riverton), Cayden Kirkham (Waterloo), and Jeremy Brown (Jones).
Freshman 1600m-
This race is always great as we get to see the new talent that will be the big names of Midwest Distance Running in a few years. Watch for Colin Hill (York), Elian Salgado (Mundelein), and Bryan Bloomquist (Janesville Craig, WI) to be in the lead of this race. Hill had a good indoor campaign as a freshman with winning the WSCS Frosh/Soph 1600m championship. Hill's PR in the 1600m this year is a 4:39.17. Salgado is the next young stud from Mundelein. The Freshman ran a 4:44.59 in the 1600m at the Lane Tech Pizza Invite in high school track debut. For your first track race that is impressive. He could very well break 4:40 since he has gotten rid of those first race jitters. Bloomquist is the young gun that the state of Wisconsin will have to offer. The Freshman took 22nd place at the Division 1 State Meet and ran a 4:48.23 in his first ever track race. Like we said with Salgado we will have to see what he can do now that he has gotten rid of those first race jitters.
1600m-
This race has a great lineup that includes Rory Cavan (Glenbard West), James Giftos (Monana Grove), Scott Maison (Wheaton Warrenville South), and Sam Jaeger (Middleton). Cavan took 2nd the last time he ran the 1600m at the WSC Silver Championship during the indoor season. The 3A All- Stater in cross country will be making his outdoor debut at Palatine. Giftos took 13th place at Wisconsin's Division 1 state meet for cross country this past season. The junior took 9th place at the Wisconsin Indoor State Meet with a 4:25.92 in the 1600m. Scott Maison will not have his twin brother Sean Maison to push him in this race as Sean is on the main card in the 1600m. Scott had a good race at DuPage Conference Meet in the 1600m taking 2nd place with a 4:23.70. Scott told us that he wanted to beat his twin brother at this meet before the heat sheets came out, but now Scott's goal is just to win the undercard 1600m. Jaeger is a sneaky member of this field. The Wisconsin native qualified for NXN this past cross country and took 97th place at the big meet. Jaeger will be making his 2018 track season debut at palatine. It will be interesting what the NXN qualifier can do in his first race since cross country.