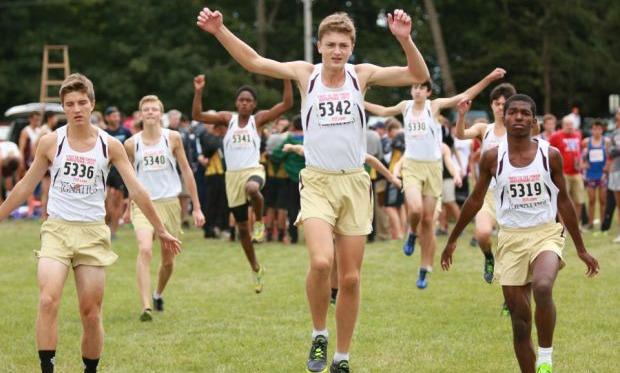 What to watch for:

This will be a rankings buster and early season clash among some of the elite teams from a year ago. Lyons Twp used a tighter pack than WSC Silver foe Hinsdale Central in winning the title that featured 45 teams. It should once again be a clash among the titan squads for supremacy. Lyons won their home invite last week against a few teams that were highly successful in 2015. It is unusual for conference teams to meet this early in major contests. The Lions ran their scoring split 1:12 and got away with it because of the upfront punch from senior Vince Zona and junior Danny Kilrea. They will need to be on all cylinders against tough competition from the aforementioned Red Devils. Hinsdale Central finished a distance second to #1 Neuqua Valley last weekend. They have a strong trump card in senior Blake Evertsen.

Downers Grove North is back and ready for another state trophy run. The Trojans have cruised in the few meets on the season. They ran as a pack in the EIU Showdown. Don't expect to see Andrew Marek and company soft shoe running on Saturday. Whitney Young ran a partial squad last weekend at Plainfield Central. Star junior Clayton Mendez and a few of his teammates did not compete. But Mendez has competed on the Detweiller course this year though. He won the high school portion of the Detweiller at Dark in July. This may be the season the Dolphins can show off among the elites. Fishers Indiana is rated #3 in Indiana's one class poll. They have competed here in the past and done well.

The individual race will not be about times although we could see something fast by a fleet of runners. Minooka's Soren Knudsen fell ill near the tail end of last weekend's Hinsdale Invite. He was rightfully beaten by Blake Evertsen inside a minute. He is feeling better and will be ready to run something "inspiring." Evertsen has confidence. Mendez does too.

The girls field will be fast and furious (Steven Bugarin)

The top three teams in this field have all won state titles in recent history. Naperville North was favored to reign in the title last year but was upset by Minooka. Yorkville won the last five 2A state titles. The Lady Foxes are now in 3A full time. This means they can defend their FTTF title outright. They will have top runner senior Alexis Grandys. She had previously been out of action with a sore knee. Pre-season #1 Minooka will be looking to rebound after finishing second to Glenbard West at Hinsdale last weekend. In a big field the Indians should do well with their "triplets" seniors Ashley Tutt, Mackenzie Callahan, and junior Emily Shelton. They are expected to finish in the top 7. The key will always be where the 5th runners falls in line. The deficit produced a numbing 2:07 scoring split. Batavia placed second at St. Charles Leavy Invite last weekend and Downers Grove South won the Fenton Early Bird. They add tremendous depth along with Hinsdale Central who will load their team for the first time.

Last year Judy Pendergast ran the fastest ever time in a regular season race with a sizzling 16:18. The former Naperville North star is now at Harvard University. The next in line could be Barrington senior Jocelyn Long. She placed second with a great time of 16:49. She appears to be in mid season form already after winning the Leavy Invite by a big margin. She will have company from the Minooka trio of course. Daly Galloway is entered in the field despite being a 1A competitor.