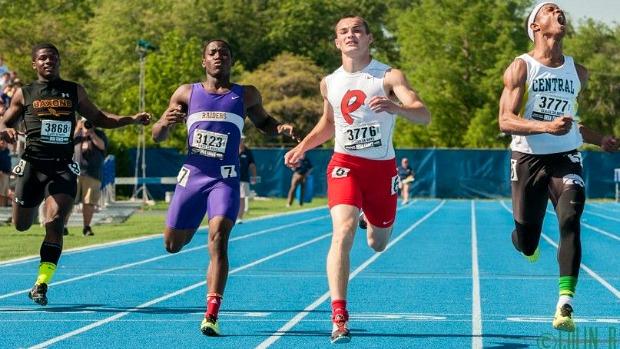 The sprints will be hot this season with many star juniors back and other emerging speedsters ready to make a name for themselves. Kahmari Montgomery and Plainfield Central had a lot to cheer about in 2014. Check out this preview to see what is predicted of them.

Season outlook: The two-time state champion Cole Henderson held the sprint dash king title well... 2014 was one of the better years in the Century. The fast kids are running in this event again. There was a time when 10.98 was the magic time for a champion. However, times have changed. It took every inch of 10.91 to make last year's final. There were 20 sprinters in 3A that ran 10.91. One of the speedsters that did so was the runner-up Titus Booker. He clocked a season best 10.64. As good as that time is, it does not make him the odds on favorite as the new sprint king. 200/400 emerging superstar Kahmari Montgomery indicated that he may take a serious look at adding this event to his repetoire. Montgomery has worked on block starts along with form and acceleration runs through the first 10,20,30 meters. It is all about execution in the drive phase that will make him faster in his specialty races. Still the feeling is Montgomery can run 10.30 to 10.40 this season... last year's underclassman of the year Cary Lockhart ran the second fastest time in the state in a frosh-soph race. Lockhart was just a freshman then and the coaching staff kept the training wheels on him. This year with some maturity and solid race experience behind him look for this stallion to explode. Scotty Miller did some good things in this event like earning a third place state medal. The Broncos standout improved steadily throughout the season and should be even better this spring. Demoria Harris moves from 2A where he won the state crown and has a personal best 10.80. Although Harris is better at 200m, he does have explosiveness that could benefit him more in the big league. Shandall Thomas caused a stir last year when he starred on the Saxons outstanding 4x1 and 4x2 relays. He would be wise to opt out for individual glory in his senior season now that it appears Schaumburg won't be as potent in the relays. 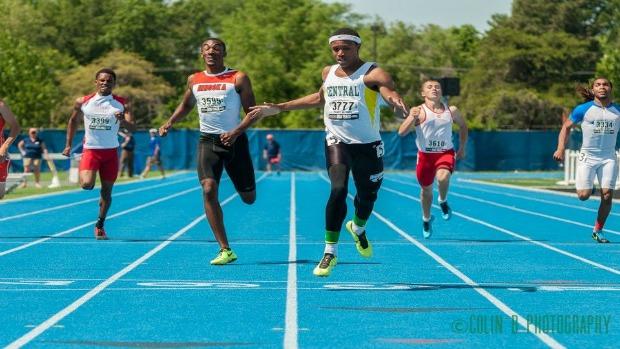 Kahmari pulls a slick 46 on the competition at state

Season outlook: The fastest performer in the land of Lincoln created a tremendous buzz for himself and then the fandom with a sizzling 46.82 state championship run. The time reminded everyone in the stands of a fella of years past named Ryan Shields of Chicago Leo who rocked the knot of his foes with similar times. Kahmari Montgomery is indeed a great talent in the making who gives all credit to his coaches and especially to Mr. Thomas Boatright for the ascension. But the job is not done. The vision that lies ahead is to break 46-seconds and it is a possibility this year, but it will more than likely will have to occur post-IHSA season. Illinois has had a few great quarter-milers over the years, but the lack of depth and cooperation from Mother Nature during the Spring has kept a lid on such an effort. However, Montgomery does have tremendous leg speed in his favor, and he doesn't have to labor through many relays. So, it's going to be a lot of fun watching this young man chase history throughout the spring and summer. The rest of the field is good and should enjoy some residuals from Montgomery. Zac Espinosa is an all-purpose runner who is a mainstay on some pretty stout Wildcat relay squads but has stepped up over the past year to make a name for himself. The end result for Espinosa was a 4th place finish in the state meet. He can surely run in the 47's this year. Carl Klamm is an 800m runner by trade but focused on the 400m down the stretch of last season. He ended up placing 6th at state. Klamm may move back into the event that will pay the bills for college- the 800m- but he will be a factor whenever he toes the line for one lap.

Season outlook: It was almost perfect conditions when Kahmari Montgomery dethroned the previous champion Cole Henderson with a blistering effort that really left him and others in the dust at Eastern Illinois University. Montgomery is aiming to push himself into the very low 20-second range this year. There is little doubt he can break 21.00 but how far under that mark remains to be seen. A returning field will be large and in charge and that should help somewhat in keeping the motivation levels high. Demoria Harris upset then 2A favorite Josh Eiker of Galesburg last year to win the state title. He should enjoy the deeper competition of 3A this season. Eiker ran a sizzling prelim time but to only fizzle against Harris. Shandall Thomas, Scotty Miller, Titus Booker, Cary Lockhart, and several others will be waiting their turn against Montgomery this season. 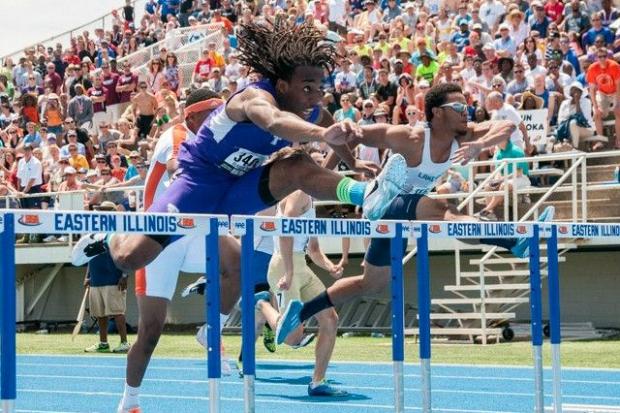 Season outlook: After this track and field season Antonio Shenault will leave for the University of Minnesota where he will play football. It is not certain that he will even be allowed to participate in track at the next level because his scholarship will come from the football program. You see in college they have weight programs and spring football to keep stallions busy in the "off-season." But if Minnesota is wise they will allow this great athlete to play both. In the meantime, you better cherish every moment that Shenault is out there hurdling and sprinting his way to great performances. We all should expect to see a few times dip under 14.00 and make some noise on the national stage. William Session just missed the state final last year but he returns as the top individual performer in terms of time. Annile Williams would have been an outstanding figure here but he transferred to Florida at the start of the school year.

Season outlook: We already identified one potential sub 37-second barrier smasher in Lucas Ege of Burlington Central. It is going to be hard to say the same will happen in 3A, but anything can happen. Who could have predicted Conor Dunham and his wonderful season? He ran just 38.36 as a junior before exploding as a senior. Isaiah Michl dipped under 38.0 at 37.99. He will be improved but how fast will depend on running in multiple events such as his teams perceived great sprint relays. There is some depth back even with a large graduating class and Annile Williams transferring from Plainfield North to Orlando, Florida.