Season outlook: If you believe in momentum then you have to tab Lindsay Graham as the pre-season's premier choice. Graham is coming off of a dominant cross country season where she destroyed the competition enroute to a state title. Lindsay declined multiple invitations to compete in the post-season. Graham admitted that she needed a break after putting so much into winning the state title. "Training is going pretty well and I'm also enjoying the break away from racing," said Graham in reference to her decision to watch rather than go for post-season glory. "I expect my times to be a little slower when I start back up, but that's because I did more base stuff this winter and because I want to be able to extend my season past the state meet if all goes well." Now that she is fresh and rejuvenated be ready for big things on the track this spring. The returning field will be strong as usual with the likes of Alexa Haff, Elly DeTurris, Skyler Bollinger, Alexis Grandys, and Mimi Smith. Smith is very excited about her final season according to her father Charles Smith. "Mimi is as jazzed about this track and field season as any she has trained for! Right now she is building her mileage up. She restarted in late December and has been very consistent for the past five weeks." If there is any indication that Mimi will slip after a so-so finish in cross country that netted "only" a 7th place finish, you are going to be very mistaken. "It has been interesting watching her train, with vigor, through the snow and cold," her father added. Last year's darling Mary Blankemeier (So., Oak Park-River Forest) hasn't run a step since last summer. Her coach Tom Tarrant does not have a time table on Blankemeier who suffered a serious stress fracture. Other possibilities in this event is Kelly O'Brien. She improved so much in xc that she could end up becoming a regular. And there is also freshman Audrey Ernst. The freshman newcomer from St. Charles North had an excellent harrier season. 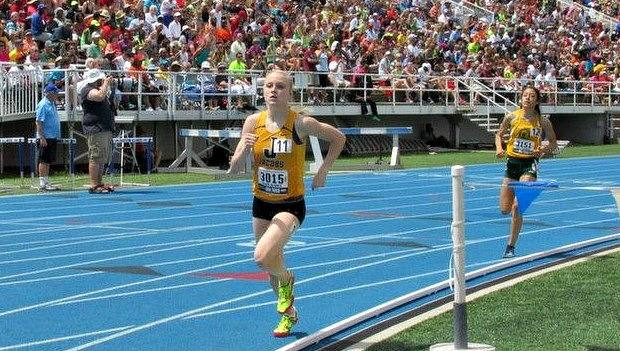 LVV is ready to repeat in the 800... if not she will be the one everyone is chasing (Sabrina Mendoza photo)

Season outlook: Van Vlierbergen went coast to coast that ultimately led to her first title a year ago- absolutely downright nasty on the track. LVV is clearly the best half-miler in the classification and arguably a cut above Karina Liz (Jr., Aurora Central Catholic), but maybe she needs more excitement somewhere else. She admitted that she would like to be a part of state qualifying 4x8 relay with her teammates. She also wants to master the mile before heading off to the University of Michigan. No matter what she decides to do she will be a headliner in this event... two key runners to really be concerned with are Morgan Schultz and Michaela Hackbarth. Both girls suffered bad injuries that disrupted their training for extended periods. Schulz got a stress fracture in her foot that stopped her cross country season. Hackbarth also suffered a foot injury related to gait informalities. Hackbarth has maintained a positive attitude throughout the low periods and expects to get back to the runner-up form from last spring. "I've been able to find creative ways to train without runner over the winter," she said. "I have more of a strength base than I did last year... with a combination of pool workouts, I have been running for about two weeks."

Season outlook: Credit goes to Anne Zaher for winning a very smart race and taking home the state title. This season with a strong cast returning the stakes will be very high- perhaps higher than they have been in some time. Lauren Van Vlierbergen was last season's state leader (4:55.40i). LVV is strong enough and fast enough to crack 4:50 and she should do that at some point this season. Kelly O'Brien will be much improved in this event now that she gained more strength from a wonderful xc season. The names are endless here. Watch additionally for Meagan Biddle (Jr., Hoffman Estates), MaryClare Leonard (So., Chicago Marist), and Kathryn House (Jr., Loyola Academy)