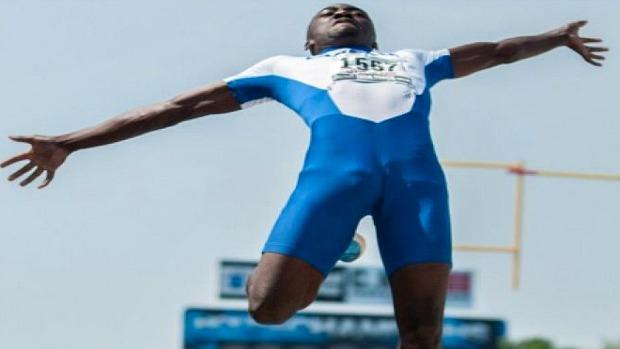 The field events will be interesting this season and perhaps historic with Cahokia superstar Ja'mari Ward (above) leading the way in the jumps. He will be like a rock star in a sport dominated by sprint men and great distance runners.

Season outlook: Ja'mari Ward has the nation's second best returning mark at 25'6.75w. That monster leap was barely over the wind legal at +2.2. The performance was also at altitude in the thin air climes of New Mexico. Regardless of the situation, Ward is someone this nation is going to have all eyes on from start to finish. Despite getting the royalty treatment since debuting as a 24-foot freshman everything hasn't been peaches and cream... and last season was not a perfect one for Ward. He finished second in the most important competition in Illinois: the state championship. He was beaten by Ben Barnes. Credit to Barnes for stepping up against all odds and defeating Ward in the Saturday final. That loss was probably the best thing that could have happen to Ja'mari according to Coach Leroy Millsap. "We are now looking at 26-feet this season," said an enthusiastic Millsap. If these are the goals that Ward can achieve then it will be more than high schoolers who should be worried.

Season outlook: The top five vaulters statistically have graduated. So the road to glory will be up for grabs. But if you are a fan of the vault, it would be safe to assume that it will be someone from the Bloomington-Normal area. Let's start with Michael Rariden. He was a 14-foot vaulter last year who had an awful day at the Dunlap Sectional and did not advance to state. He has started the 2015 season off in fine fashion with a clearance of 13'9". Hopefully, it will lead to a state championship in May. The top returner Joe Bevilacqua reached 14'6" in '14. He is a three-sport standout competing in swimming, soccer, and of course track and field.

Season outlook: No offense but this season's returning crop is average at best. That's because we have been accustomed to the 7-foot types in recent years. However, being average on occasion could add to competitiveness with a slew of guys vying for the top spot. Hunter Johnson took the runner-up spot behind Logan Zeman and could fight returning list leader Jack Curtis for supremacy. Curtis is a speedster who can really jump. The all-state 100m dash man cleared 6'9" last year.

Season outlook: Sam Sikon proved that age was nothing but a number when he finished second in the state. He also proved that his 56'8.5" wasn't a fluke when he tossed the ball over 50-feet 8 out of 9 competitions. He took 2nd in the Top Times and won the Herrin Sectional. So the youngster is in line for another great season. A slew of seniors led by Andrew Steiger will chase after Sikon.

Season outlook: The nation's top jumper is Ja'mari Ward all day. He has a personal best 50'2.5" indoors and 50'6.5" outside. Ward will be jumping for national and junior international fame this summer. Coach Millsap has worked with his pupil since grade school and indicated this year will be about approach and technique. "54 feet is the goal now. 52-feet was the old goal, "said Millsap who believes Ward has improved tremendously in the off-season. Ben Barnes, Luther Newburn, and few others will add quality to the field.