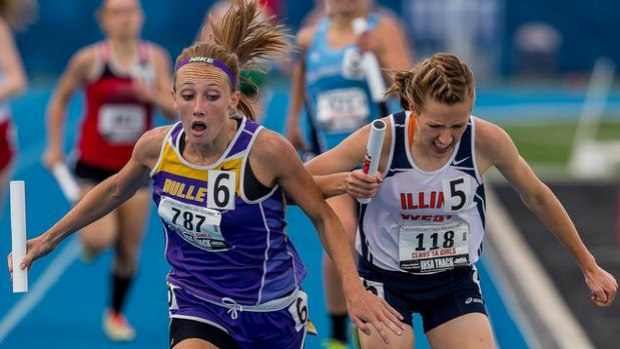 There are some folks who think relays are for the fans, as if the coaches that put together fast units are doing it for fun or to supplement their egos. Yes, it is true that some schools pride themselves in being termed a “relay school." But by and large relays serve a greater purpose of scoring points that help teams score crucial points. In Texas, relays actually count for 20 points in the state championship as to not let a superstar athlete go on a rampage. The relays in Illinois may be the deciding outcome of the three team trophies in May.

Note: attached are times from the 2014 outdoor season followed by a complete list.

Season outlook analysis: 10 of the top 12 teams from a year ago return 75% of their units.

Last year was a surprisingly super finish for the champion DeeMac Chiefs who only placed 8th the year before. Plus, there were no indications of the 9:36.38 coming after only producing 10:18 indoors. The previous state champion Decatur (St. Teresa) was the favorite with three legs returning followed by a strong Champaign (St. Thomas More) squad. St. Teresa did not make it to state and St. Thomas More finished second.

Now the Chiefs are in the cat bird seat with all four starters back that comprise the names of Calan Johnson (Sr.), Mysteree Bottorff (Jr.), Chelsea Pawlak (So.), and Taylor Mohr (Jr.). The key of course is first staying healthy and then hungry.

A team to watch out for is Petersburg-PORTA. The Lady Jays used the Brauer junior twins Adrienne and Maria. The then all-sophomore unit ran to a 4th place finish in the state meet. Adrienne turned around and finished 9th in the 3200m. Add in another cross country standout Anna Tamborski (Jr.) and there is a potential for a little controversy. Perhaps a deep than usual distance running field will make the coaching decision to concentrate on the relay.

Urbana University HS may be a team to watch out for with the addition of talented freshman Arielle Summit. No one is sure if she will join fellow underclassman Annmarie Michael (So.) and two other solid mid-distance runners. Summit finished 3rd behind Daly Galloway (So., Gardner South Wilmington) and superstar Anna Sophia Keller (So., Effingham St. Anthony) in the 1A xc state championship.

Tolono (Unity) will have an opportunity to capitalize should any of the above falter or change their season plans; Eureka ran 9:48.44 to place 6th at state with senior Quincy McSweeney leading off. McSweeney was an individual all-state runner in the 800m. All the Hornets need is a solid lead off leg and move McSweeney to anchor.

Season outlook analysis: The key ingredient in the movers and shakers event is having four quality legs- an aggressive leadoff and a showstopper.

Illini West will hold several trump cards in their hands when this event moves outdoors. Here is the inside feeling: 1) three of four legs from last year's state champion squad return and 2) Although 100m state finalist Paige Bray graduated, the Blue Jays will remain strong with all-state holdovers Aubrie Carlisle (Sr.), and Mariah Brodie (Jr.); Natasha Brown (Sr.) of Aurora Christian is a premier speedster who will always give her team an opportunity to win. The Eagles only departed with lead off Alyssa Anderson.

A few other potential teams to watch for include Manlius (Bureau Valley), Byron, Erie, and Henry Senachwine.

Season outlook analysis: Some teams are going to have to make a decision on how good they want to be here. Either deploy a quartet capable of producing some real burn like the upper tier 2A and 3A schools, or put the best individual talent in open events and leave them there!

The deepest relay in the classification sits here with record holder and two-time defending state champion Sullivan returning three legs. The Lady Redskins will have the dynamic senior duo Amanda McClain and Emily Neuhauser back in full force. Both girls are multiple state individual medalists in the 200. McClain is a classification superstar in that she is the reigning state 400 champion! For a team with a chance to win a team trophy, it is certain that McClain will double back toward the end of the season.

Aurora Christian lost to Sullivan by an eyelash in the state title tilt as 200 state champion Natasha Brown could not make up the deficit. This year could be a different story. In five months we will all see if it happens again or a different outcome will transpire.

Newton and Decatur (St. Teresa) return strong squads; Erie and Bureau Valley would like to stay in the relevant talk- both teams need to replace some firepower to do so.

Season outlook analysis: Everyone loves the showstopping 4x4 relay even if the stadium is partially full after a long day. It's like icing on a mastery crafted birthday cake. In selfish indulgence, some coaches and certainly the fans want to see a great ending at all costs. We could see another great season in this event.

If there is such a thing as status quo, then defending state champion Williamsville could be very dangerous again. The Bullets will indeed be gunning for another state title by the end of the season despite losing top talent Rachel Rhodes to graduation.

Illini West will have to replace top girl Graci Bastert from a state runner-up team.

Additionally and specifically lead off legs are very important as coaches very well know. With this fact in mind, it will be paramount for teams to be fed quality replacements. Overall, there could be as many as five top tier squads knocking on the 4:00 barrier. More importantly, the chance to be a state champion will be there.