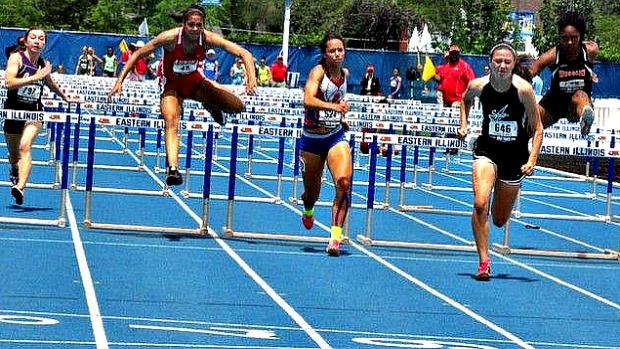 Sprint-oriented events are the bread and butter of track and field whether you like it or not. There are a lot of coaches that will build their teams around just a handful of talent because they know points can be racked up very quickly in a championship setting. This year's crop of talent will be wide spread forcing the power broker leaders to rethink plans of over-taxing their star athletes. We didn't even factor in the play of relays to the mix. It will be quite interesting to see how the season will transpire in April and May.

Note: The rankings are based off of the top returning marks from the 2014 outdoor season and do not include wind-aided times.

Outlook: The graduation of Amelia Glueck once again leaves an event wide open. The question of the day is 'can Willow Stuedemann make the leap to the top spot?' She ran third fastest time in the classification last season but was able to finish strong over the final 50m and grab the state runner-up medal. But it is Kaitlyn Pearson that owns the top returning time that she earned in last year's state prelim. While Pearson and Steudemann may battle it out for supremacy, they need to keep one eye or may be even two pupils on Nichyria Byrd. The defending state triple jump champion has been adept on the Mondo straight-a-ways in limited opportunities. Her personal best of 12.40 would have placed in the top three at the state meet last year. There are a few other notables in Maddi Meyer and relay specialist Emily Neuhauser (Sr., Sullivan).

Outlook: The classification record may be gone by season's end if defending state champion Amanda McClain has something to do with it. The Illinois State University signee could eclipse the formable but yet attainable 55.66 mark that Alisa Baron of Bureau Valley established in 2008. McClain's biggest foe may be herself in that she has chosen to run the 4x200m relay right before her signature event. Maddi Meyer is the only other returner under 58.00; 7 of 9 state finalists makes this docket one to watch all season long.

Outlook: What does it say about an event on the surface that appears to be very solid? Natasha Brown, the defending state champion, won with ease and will be a big target this season. The tall and lanky Brown (5'8") is also a killer on the basketball court where she specializes in sport's toughest area: rebounding. Brown averages 15 rebounds a game and that heart and determination will go along on the track as well.

Outlook: Double hurdles champion Jenny Kimbro returns as the clear choice to dominate. Her legal personal best of 14.60 ranked in the top five (all classifications.); Victoria Younge will be out to revenge a terrible finish in the state meet that relegated her to DFL- a fall at hurdle #5 was the real culprit; surely a few others will emerge out of the blue this season like Makayla Gayler of Oakwood.

Outlook: Jenny Kimbro will be at her best in the long hurdles affair. Kimbro ranks as the #2 overall returner in all of Illinois behind 3A's Morgan Schulz of Cary-Grove. However, Jenny could capture the top spot if U of Illinois bound Schulz cannot recover from a stress fracture that she suffered during the cross country season. Annie Carlson could be a challenge after finishing third at state a season ago.