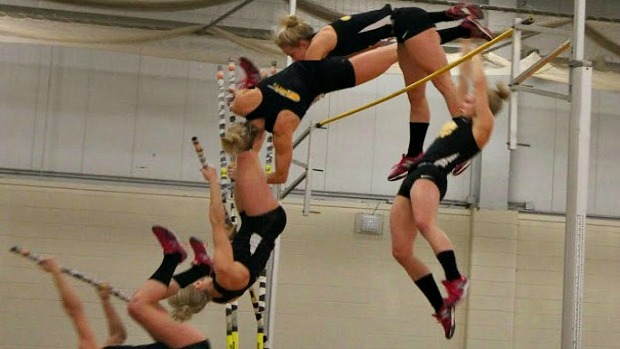 The key to winning any championship is doing well in the often overlooked field events. This season will again be key factor for a number of teams vying for crucial state points after the exodus of many top athletes. Just ask powerhouse schools like Roselle (Lake Park) and Cahokia boy's teams. Sure, they have done well in the track events throughout their reign, but it's been the field event arena that has been the catalyst in winning championships. The feeling of whipping the opponent beyond submission has to be very gratifying to say the least.

Note: The rankings are based off of the top returning marks from the 2014 outdoor season (some thoughts could include the '14 indoor season).

Long Jump-
2014 State Champion: Amelia Glueck (Tremont) 18'7" [+1.3]
Key returners: Madison “Maddi" Meyer (Jr., Carterville), Amanda McClain (Sr., Sullivan), Lindsey Hoffert (Sr., Manlius Bureau Valley), Olivia Ott (Sr., Neoga)
Outlook: There will be a new queen of the jumps this season because three-time state champion Amelia Glueck has graduated and taken her talents to Illinois Wesleyan University. Maddi Meyer will look to take the leap of faith after producing a solid 18'1" personal best last season. The speedy Meyer took fourth at state a year ago and will be dangerous once the season unfolds. Another jumper to watch will be Amanda McClain. She is known more for her exploits in the 400m but many scouts may have overlooked her 17'10 effort. However, she was able to beat Meyer at state and finished third. The battle between those these two standouts should continue throughout the indoor and outdoor campaigns.

Pole Vault-
2014 State Champion: Morgan Zacharias (Sr., Reed-Custer) 12'0"
Key returners: Zacharias, Kristin Slaughter (So., Effingham St. Anthony), Nicole Bagwell (So., Tolono Unity), Rachel Westendorf (Sr., Teutopolis), Jenna Ring (So., Downs Tri-Valley), Lindsey Brown (Jr., Kewanee-Weathersfield)
Outlook: Morgan Zacharias is the truth when it comes to the pole vault. It seems like she has been around forever placing among the best vaulters in the state year after year. Now Zacharias could position herself as the best overall vault specialist regardless of classification this year based on the fact that she returns with the eighth best mark in the nation of 13'0". Indeed she will be hard to top this season. No other returner has touched 12'0" but 7 out of best 10 vaulters will add depth to the event. Outdoor state runner-up Kristin Slaughter and third placer Nicole Bagwell return and should be much better. Word on the street is Zacharias is ready for blockbuster season. Can we say 14-feet?!

High Jump-
2014 State Champion: Karissa Roman (Sr., Kewanee-Weathersfield) 5'8"
Key returners: Roman, Tessa Holland (Sr., Fieldcrest), Chantel Kyler (Sr., Indian Creek), Ellie Niemann (So., Litchfield)
Outlook: The defending state champion Karissa Roman is back to make a stand as the best in the classification as well as a case for supremacy in all of Illinois. The pressure of choosing a college to attend will not have an impact on her performances this year as the two-sport star signed with the University of Missouri. Roman topped out at 5'8" on several occasions last season and it will be a joy to see if she can climb up to 5'10" or better. She will have some competition along the way from a deep returning cast led by Tessa Holland who scaled 5'7" in 2014. 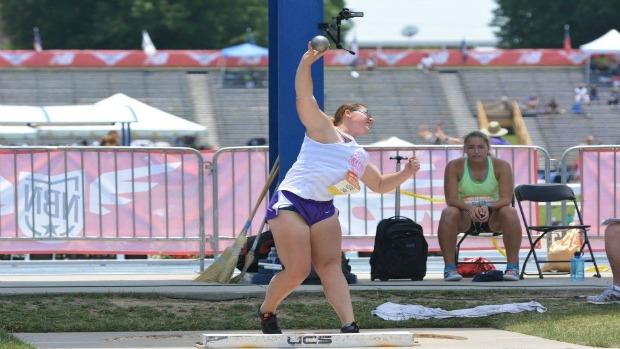 Shot Put-
2014 State Champion: Kathleen “KD" Young (So., Warrensburg-Latham) 43'5.25"
Key returners: Young, Rachel Clowers (Jr., Pleasant Hill), Katie Hise (Jr., Decatur St. Teresa), Mikah Maples (Jr., Moweaqua Central A&M)
Outlook: The top three state finalists and 8 of the top 12 return making this arguably the deepest event on the docket. If you include KD Young as the state's best thrower in the mix it would be hard to dispute the numbers. Young will attempt to pick up the mantle in the shot which has become a national class focus in terms of individual prominence in recent years. She heaved a personal best 46-7 last year putting her among the top 25 best throwers in the country. If Young continues to improve she could pound on the 50-foot door and really make some noise on the national level. Oh yeah, she won her age group USATF National Title last summer. 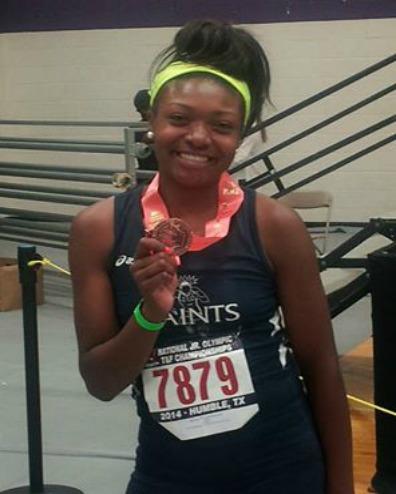 The hidden talent that is Nichyria Byrd (Byrd photo credit)

Triple Jump-
2014 State Champion: Nichyria Byrd (Sr., Chicago Ogden International) 38'3.5" [+1.4]
Key returners: Byrd, Tessa Holland (Sr., Fieldcrest), Annie Carlson (Jr., Westmont), Lexie Wilkinson (Sr., Seneca)
Outlook: Byrd was a virtual unknown outside of the Public League literally until the state championship final. Even then most observers didn't know who she was. Hopefully, after some summer track notoriety and experience Byrd will get a few invitations to some big competitions this winter and spring. She definitely has the talent to reach the 40-foot plateau. Holland will be in the mix as well.

Discus Throw-
2014 State Champion: Kathleen “KD" Young (So., Warrensburg-Latham) 136'2"
Key returners: Young, Rachel Clowers (Jr., Pleasant Hill), Mikah Maples (Jr., Moweaqua Central A&M), Mazi Walker (So., Winchester), Abby Nicholson (Jr., Jamaica), Kylie Davis (Sr., Eureka)
Outlook: The top six state placers and 10 of 12 return in a loaded event. Young is the class of the field with a 143'8" personal best from last summer in winning the AAU National age group title. Clowers is the other thrower 130-feet with a personal best of 134'10". What does the future hold for Young this season? Perhaps getting up into the 150-160 foot will put in the immortal stage of her infant career and among the very best in the state of Illinois.