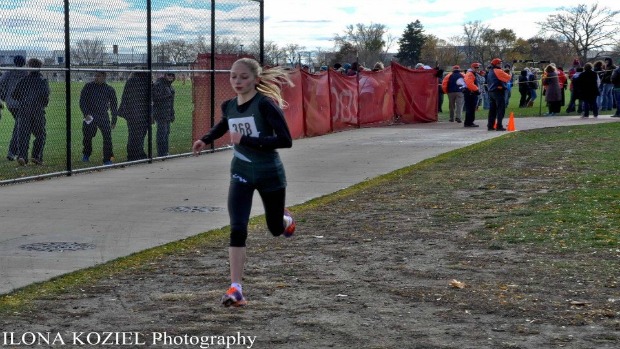 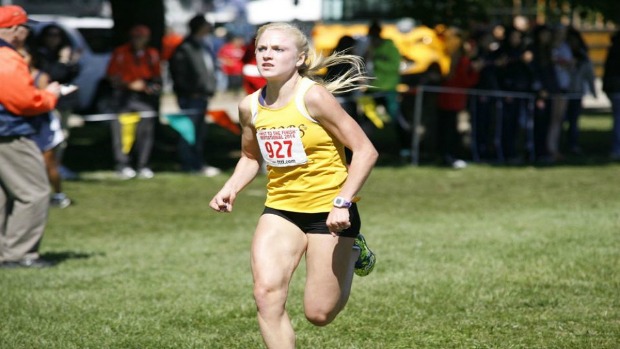 Lindsay Graham may be the favorite, but don't be surprised if Lauren VanVlierbergen surprises (Steve Bulgarin photo)
The Individual race may have two races in one-
Lindsay Graham has taken the mantle from former teammate Madeline Perez and ran away with it since early October. One would argue that she has closed the gap on 2A standout Maryjeanne Gilbert and 1A stallion Anna Sophia Keller (So., Effingham St. Anthony) in terms of the overall best distance runner in the state. The supposed recent match-ups against Alexa Haff and Mimi Smith turned to out be duds in favor of Graham. But folks in Haff's and Smith's camp think the best is yet to come from their respective runners. One person who is emerging to the top again is Lauren Van Vlierbergen (Sr., Algonquin Jacobs). LVV started the season off on fire but then leveled off with a loss followed by a few "average" performances. She had perhaps her best race at sectionals breaking off Kelly O'Brien in the final mile to win the Schaumburg Sectional with ease. LVV will be running with a free conscious after signing with the University of Michigan. Now the 800m defending state champion can think only about the race on Saturday. A fast pace it seems may be the only thing that can deter her.
Gabby Juarez (Sr., Streamwood) has gotten very little fanfare despite running well this season. She won the St. Charles East Sectional in 16:58 and before that she has competed tall against the best competition on her schedule. Juarez is now a candidate for top five status. Haff should not be dismissed from a top three spot nor should Smith. They are destined to give it their all on Saturday. O'Brien should be ready to run well again despite fading due to dehydration or extreme fatigue last weekend. Lauren Opartney (Sr., McHenry) is back and healthy. She finished second at Schaumburg. Watch for the mile champion Anne Zaher. She filled in nicely for Haff while she was resting.  Audrey Ernst (Fr., St. Charles North) bust out on the scene running with the top girls in the state. Can she do it again? What about MacKenzie Altmayer? Plainfield North junior Rachael Lau is a front runner. Watch for her to challenge the leaders from the gun. Keep in mind that one team: Glenbard West has two front runners aside from Graham in Lisa Luczak and Lindsey Payne. Also look for Ashley Tutt to come up and bite the competition. They realistically could finish in the top 10.
Tweets by MilesplitIL