It has often been said that two heads are better than one. The 2013 track and field season definitely proved that fact as seniors Emmonnie Henderson (Edwardsville) and Aaliyah Brown (Frankfort Lincoln-Way East) totally dominated their competition and earned co-athletes of the year.

Emmonnie speaks with a shot put and discus- 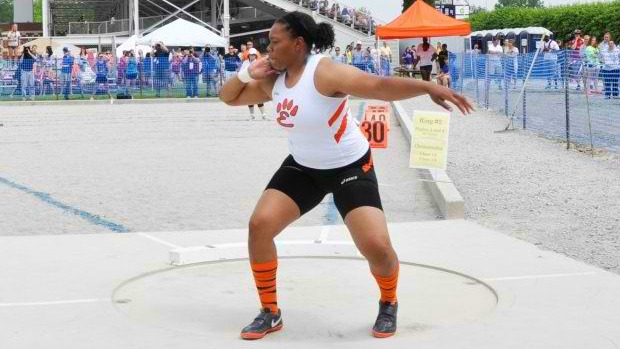 Despite playing the background role to her predecessors Daniella Bunch (Mahomet-Seymour) and Kelsey Card (Carlinville), Emmonnie Henderson always knew her time as one of the best to lace up throwing shoes would come. “It comes when it comes, you can’t rush it. If it’s in God’s plan he will give it to you,” she stated humbly after becoming the first girl to surpass 50-feet in the shot put at the state championship. Henderson moved to #2 all-time with her monster 50-9.5 heave. Bunch has the best ever mark of 51-0.75 that was produced at the Cornbelt Conference meet in 2008.

There is no doubt that two-sport superstar (Henderson signed a basketball scholarship w/ U of Louisville) made a tremendous impact on her second love track and field.  Henderson, who stands at an intimidating 6’2”, won three of four shot put titles as well as the last two discus crowns. Her best of 167-8 is the best ever in Illinois history.  She is also the only school girl to top 49-feet indoors at 49-1. All of these marks rank in the top six in the country. If it weren’t for basketball Henderson would mostly contend for national throws titles. However, expect her to continue to terrorize the collegiate throwing ranks once her hardwood season ends.

Aaliyah proves to be the ultimate team player- 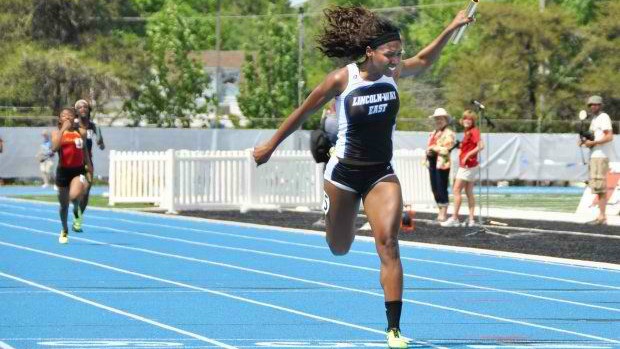 Although Aaliyah Brown did not achieve her ultimate goal of breaking the state and high school 100m dash records, she was able to become of the best sprinters in IHSA history with 11.42 (+2.7) and 23.74 marks. Brown was more than a one-women wrecking crew during her senior year. Brown played up to her famous nickname “The Franchise” perfectly in leading her team to its first ever state team championship in May. Along the journey included impressive performances that dotted the country.  Brown led her mates to an all-time state best 1:39.51 at the New Balance Indoor Nationals that netted a third place effort. It was at that moment that Brown would show everyone that she was a true team player.

The efforts of Brown would continue to produce the fruits of her labor in the early portion of the outdoor season when her team traveled to the Texas Relays; she finished off winning 4x1 and 4x2 relays against the vaulted Texan teams. Brown’s turbo boosted finishes dazzled the track crazed fans. She would continue to impress at the Penn Relays in April, once again anchoring her team to an Illinois record 46.10. However, the ultimate team prize for Brown would be the state championship. It was something that she wanted for four years and there would be no stopping her. Ms. Brown would sweep the short sprints and in between anchor two relay wins- the 4x2 would set another all-time best 1:37.59.

Assistant head coach Angelo Brown on his daughter Aaliyah’s selfless performances: “Aaliyah has always had that team atmosphere since she came to high school. She had an opportunity to run the club circuit when the IHSA said that athletes couldn’t run certain meets. She said ‘no dad I want to run with my team.’” This speaks volumes for a superstar athlete that some pundits once thought was selfish and only concerned with running fast individual times. Instead Ms. Brown will go down in state history as one of the premier team players. Now, she will take her act to Texas A&M University this fall. Stay tuned!