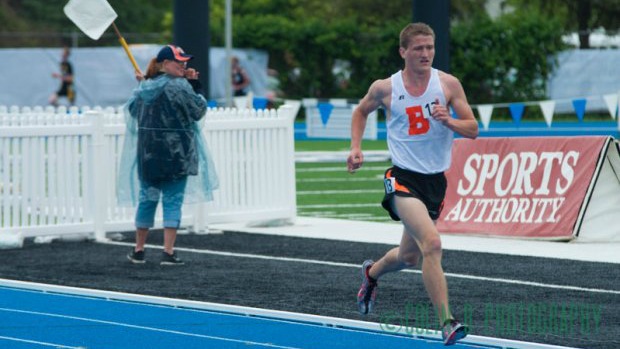 Grant Nykaza (Sr., Beecher) admitted at the start of the 2012-13 school calendar year that not winning the 2011 harrier title left a bitter taste in his mouth.  He took care of that business in fine fashion last fall.  But he also noted that not being able to compete in last spring’s 3200m race was as equally disappointing because an injury had interrupted his training and thwarted his fitness level.
2013 would be a totally different year with a healthy body and mindset for the electric running Nykaza.
Nykaza would start his championship quest during the indoor season by running the third and fifth fastest times in the 1600m and 3200m races clocking 4:20.20 and 9:14.37 respectively. Those marks would only serve as an appetizer to what is to come later.
With all due respect to Class A competition, it was simply a league that was no match for Nykaza.  He forfeited his entry to the Illinois Top Times Indoor meet to concentrate his efforts on the outdoor season at several high powered meets. Mr. Nykaza traveled all over the country during the regular season for top-notched competition.
The first meet that he competed in was the Florida State Relays 3200m. Nykaza placed second in a fine 9:07.39 on March 23. That time and effort would serve as his season’s best. It would also certify him as one of the premier distance runners in the state as well as the nation. Nykaza also competed in the prestigious Arcadia Invitational in California and the Eastern Relays in Louisville, KY before focusing on the state series.
Nykaza won the state 3200 and 1600 championships with ease and decided to call it a season instead of trying to improve on his personal bests. “I felt great today… I wanted to run faster out there today but I am glad with accomplishments. I had to give [the crowd] the chop in the end,” he said referring to the farewell love and support of his fans over the years.
Nykaza will now take his talents to Florida State University in the fall.  He indicated that he plans to make to take his team’s top 7 cross country team rather than redshirt.  He is that confident in his talent.  As well, the state of Illinois distance community wishes nothing but the best for Mr. Grant Nykaza.