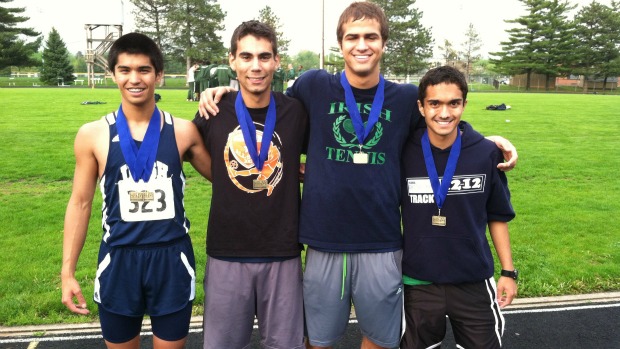 What a week! Last Thursday was conference. It was a relatively short week in terms of mileage as we began to taper. Also, our speed workout consisted of six 400s with five minute rests in between each to recover fully. I ran an average of just under 59 seconds for each. It was a good workout to get my legs used to a fast race and used to the turn over needed to run sub 60 both laps in the 800. At conference, I was in the 4x8 , open 800, and 4x4. We opened the 4x8 by winning easily. We were actually going for state qualifying time which is about 8:15. We ended up running in the 8:16s so we are close to getting our relay to state. Thirty minutes later I came back to run the open 800. This race definitely became a learning experience to help me realize never to take anything for granted. I was seeded well ahead of everyone. I lead the first lap so we all went out not necessarily fast in a 63. I was passed at around the 500 and I thought this runner would eventually come back to me in a little bit, which he did at around the 100 to go. We were both in an all out sprint at this point. He barely nudged me out for the win by hundredths of a second. We both ran about a 57 second lap. This is not the way I run 800s and obviously will not be the way I run in the future. I am just glad this mishap happened before state rather than at state or sectionals. I just need to remember to go after it in the first lap and hammer it home the last lap.
The weekend consisted of about nine hours in the car and a fun weekend watching the SEC outdoor track and field championships. 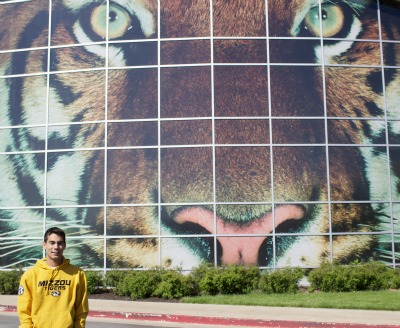 My Dad and I left at about 11 in the morning on Saturday after my morning practice, hoping to make it just in time for the start of the 1500m prelims. We ended up getting there right as the gun went off for the first heat of the 1500m. Luckily all the Mizzou runners were in the 2nd heat. Only one qualified for finals but it was a fast race. After that we saw the 100m prelims and hurdle prelims. There were about three guys under 10.1 in the 100, really close to breaking 10, which would have been blazing fast, but it was still fun to watch how fast they ran. We also saw the 400 and there were times in the 46, which is really fast. The most interesting race of this day was the 3000 steeplechase. I have never seen that race before and it was definitely my favorite to watch of the day. Not only do you need endurance but you need to be able to jump and be flexible to get over the steeples. After the meet, we went out to eat in downtown Columbia. I really like how close the campus is to the downtown and just the atmosphere of the city. The next day were the finals but that didn’t begin until one in the afternoon. We walked around campus and took pictures hoping to get a cool looking picture for my graduation cake. The campus looked really beautiful. Flowers were recently planted and there was a lot of colors, the trees were budding leafs and there were no clouds in the sky. We headed to the track after taking pictures and ended up being the first ones there. The track looked nice and I couldn’t believe I’d be running there next year. The first event was the javelin throw, again another event I haven’t seen, which was really neat to watch. The track finals were especially fast since it was the last race and there were some pretty unbelievable times. There were tons of All-Americans and even some Olympians in the meet. They were unbelievable to watch. We ended up getting home around 11pm Sunday night. It was definitely worth it to watch such an amazing meet with tons of elite runners.
This Thursday is sectionals. The bad thing is that it's in Macomb, which is about 90 minutes west of Peoria and to get there you, have to take two lane country roads. I’ll be ready to run fast and get to Charleston for my last high school meet!
Athing Mu is Already The NCAA Favorite Jan 18, 2021
Girls 5000m Run Heat 2 NCHSAA 3A Midwest Regional Jan 18, 2021
Hill leads wire to wire for Regional Champ! NCHSAA 3A Midwest Regional Jan 18, 2021
Motondo kicks to the finish for a sub 16 win! NCHSAA 3A Midwest Regional Jan 18, 2021
Full Replay - VA Showcase - Milesplit - Pole Vault - Jan 17, 202 The VA Showcase Jan 17, 2021
Full Replay - VA Showcase - Milesplit - Track Events - Jan 17, 2 The VA Showcase Jan 17, 2021
Tweets by MilesplitIL