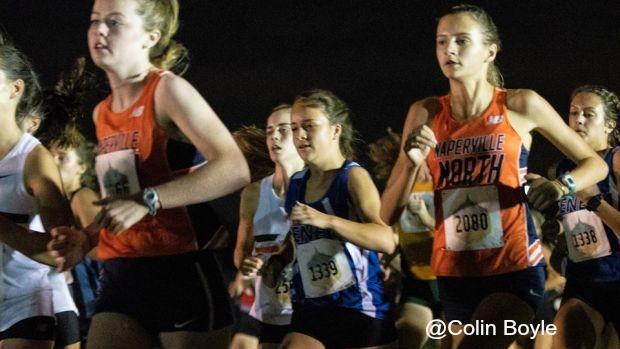 Date: 11/3/2018
Location: Detweiller Park; Peoria, IL
Course: 3.0 miles
Race Time: 1pm
Awards ceremony: 3pm at the Detweiller Park venue
Weather forecast: It is expected to be the warmest part of the day with temps in the low to mid-50s. It should be a great environment to drop some great times and performances.
Media coverage: Live updates all meet day long beginning at 8a. Follow us on twitter at Milesplit Illinois @milesplitil shout us out using hashtag #ihsaxc18
MileSplit IL Premium 25 Girls: Read Here
MileSplit IL 50 Rankings: Read Here

Naperville North, Yorkville, and Downers Grove South are the cream of the crop-

This three teams might be the best collection of talent assembled at one time in state championship history. Defending champion Naperville North is coming off of a season in which they placed second at the Nike Cross Nationals. Some have thought the Huskies would slip a bit after graduating Sarah Schmitt and Hannah Ricci. But the truth is the squad was already deep with five state runners back. Add in some super freshmen and transfer star from Dunlap sophomore Campbell Petersen, you get another nationally ranked team- #3 to be exact. Senior Alex Morris is the team's true low stick threat. The expectation will be of her to be in the top 10 somewhere and the scoring pack upfront doing major damage.

Perhaps the best team in terms of talent is Yorkville. No team in the state has a trio like the Foxes. Senior Emily Eberhart, junior Kailey Fox, and sophomore Helena Kleronomos. They all have the potential of finishing in the top 10 on a perfect day. And if they can get the back end of the scoring pack to move up, it could have everlasting consequences on the field. The Foxes were able to beat Naperville North at the high powered Roy Griak Invite in Minnesota in late September. They ran a flawless race in that affair. It can happen again if the girls execute their game plan.

Downers Grove South is the trifecta and often overlooked team here. Coach Doug Plunkett's squad has traditionally been a strong pack running group without a knock out punch. That has changed this season with junior Brenna Cohoon leading the charge. Cohoon has been highly rated in the premium 25 all season. Her personal best of 17:01 can easily be dropped into the 16:40s and with a supporting cast led by senior Melissa Weidner, and Erin Reidy things could get interesting. The 2-5 must be under 30 seconds in order to win it all. Getting a trophy for the first time in school history is almost guaranteed minus any hiccups.

Of course, there are more than three teams in the title chase. Wheaton-Warrenville South, New Trier, Lyons Twp, and Prospect.

Wheaton South was favored at the Niles West Sectional but came up short by several points to New Trier. The Tigers have sophomore Sam Poglitsch to depend on as well as senior Laurel Moneysmith. But their pack running must be airtight in the mix all three miles.

New Trier has been deadly in the pack running game as Wheaton South found out last weekend. It was four seconds through its first four runners. Junior Bridget Forbes usually leads the way for the Trevians. They are a lock for a top 10 spot. Perhaps, getting into the top five is more to the girl's liking. It can happen.

Sophomore Kate Dickman of Lyons leads a potent team that has been great at times. Dickman is certainly a top 10-15 talent and that will help if the pack can compliment her nicely.

Prospect are the darlings of the MSL this season. The Knights don't have a low stick runner but they have a tremendous pack with four girls under 10 seconds! If they can repeat this then we may be talking about a top five finish.

All season long the fans have been patient with junior superstar Katelynne Hart of Glenbard West. She has teased us all at times by going out in supersonic opening miles only to shut it down with a circuit to go. Hart has yet to be challenged this season. Could we see the second sub 16:00 performance by a girl on Illinois' soil? Or is she saving her best race for Portland?

There are several newcomers on the scene who are here to stay. Freshmen Katrina Schlenker of Batavia and Aly Negovetich of Grant are the two most dynamic leaders of the next generation of Illinois distance running. Both have run blazing fast times this year and with Negovetich running a 16:30 last weekend at the Hoffman Estates Sectional the question stands... what can Schlenker run? Time will tell, but for both runners careers, it has always ended with Schlenker coming up on top. Could we possibly see both go sub 16:20?

Morris and Cohoon as we mentioned previously along with the Yorkville trio will fight for top five to 10 spots. Of course, we could see some blazing times as the course on the eve of the biggest day of the season appears great. One would think the record of 81 girls under 18:00 would get challenged.