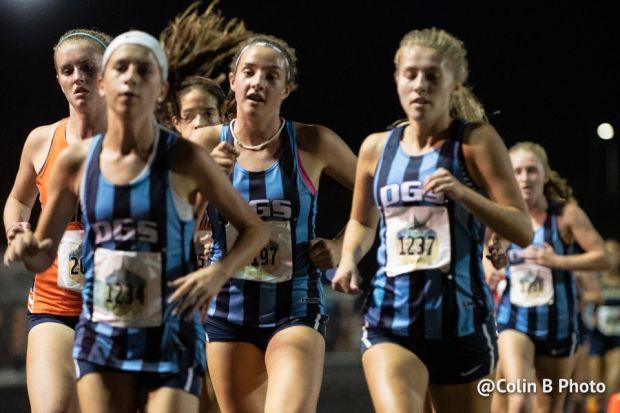 Downers Grove South junior Brenna Cohoon is coming into her own as a solid favorite to win the individual title. She ran great last week as she was tested by Abby Lopez of Argo. Cohoon came away with the win, but only by four seconds as she ran a time of 17:45.

The Mustangs ran fairly well last weekend, but it was nowhere near what they are fully capable of. Melissa Weidner cannot be alone here, she needs to have teammate Erin Reidy with her for the entire race. Reidy missed last week as a precaution as she had tweaked her hip in practice, she seems to be ready to go this week. At regionals, Kennedy Warden and Becky Versaskas didn't race like usual. Both have been key parts to the Mustangs outstanding season thus far. Warden took 10th place with an 18:54 and Versaskas took 11th place with an 18:55. They will need to be within 25 seconds of Warden and Versaskas if the Mustangs want to secure a for sure victory.

The Lady Lions gave the Mustangs a run for their money at the Hinsdale Central Regional coming only two points away from the nationally ranked unit. Sophomore Kate Dickman led the way in third place with a rock-solid performance. Tight pack running has been the staple this season and from it some good notes. Senior Sarah Barcelona looked the best she has this entire year. She took seventh place at regionals with an 18:25 which is her season best on a hard KLM course. The 2-4 pack looked great as they had a split of only three seconds between the trio.

Cohoon or Lopez for the individual title-

Cohoon is coming into her own as a solid favorite to win the individual title. She ran great last week as she was tested by junior Abby Lopez of Argo. Cohoon came away with the win, but only by four seconds as she ran a time of 17:45. Lopez is back and ready to roll after an early-season injury was the stumbling block. Her heart may take her to a win on Saturday and a second sectional title in as many years.

Dickman was third to Cohoon and Lopez at the Hinsdale Central Regional. Dickman has the ability to beat the two as she has run great all year long. She can possibly challenge for the win this upcoming weekend if she performs the same way she did at the West Suburban Conference (Silver Division) Championships where she ended up beating a strong looking Katie Hohe of Glenbard West. Do not discount junior McKenna Revord of Hinsdale Central and Plainfield North senior Juliana Stogsdill. They add value to the field.