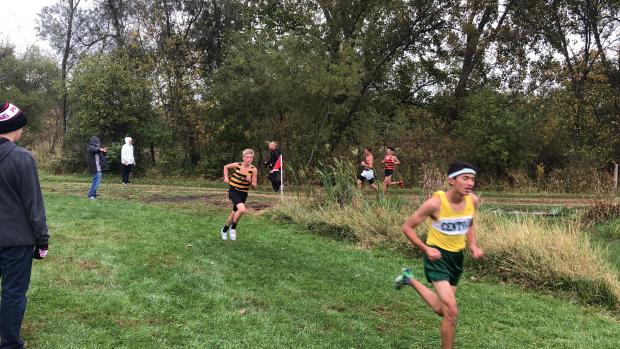 Channahon, IL- The Southwest Prairie Conference meet was a cold one this year as temperatures did not surpass 47 degrees. Because of gusty winds and bouts of rain, times were greatly affected due to the conditions. It is plausible that times were 20 seconds off of normal projections. However,  the weather didn't prevent some amazing performances from occurring. 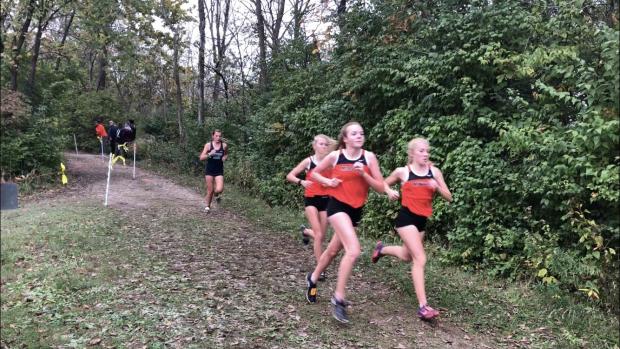 The girls frosh/soph race kicked off the day and set a great tone for the rest of the meet. From the sound of the gun, a pack of four runners separated from the field consisting of Audrey Boles (Minooka), Brooke Wlodek (Minooka), Meadow Zomparelli (Minooka), and Maddi Amer (Oswego East). The foursome came through the first mile at around 6:13. The second mile is where the Indians trio started to distance themselves from Amer- coming through two miles at 13:11 and up six seconds on Amer. Inside the final mile is where Boles decided to make her move with a huge surge and with it the hammer. Boles ended up winning with a 19:23.2 over teammate Woldek who ran 19:32.8. The Indians walked away with the team win easily after taking 1st, 2nd, 3rd, 5th, 12th, 19th, and 25th places to score 23 points. Oswego East came in second place, lead by Amer's fourth-place performance. The Wolves scored 41 points as they took 4th, 6th, 7th, 9th, 15th, 16th, 17th places. 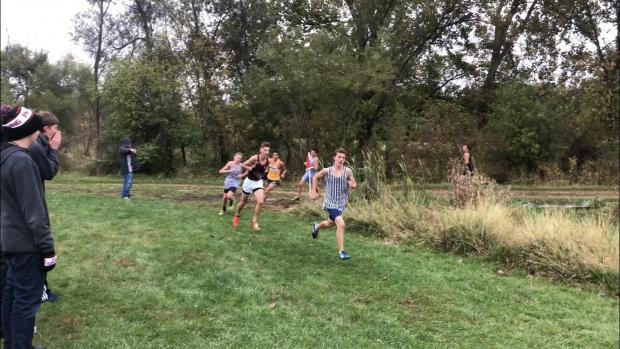 The boys' frosh/soph race was next with an impressive performance by Plainfield South, but it was not enough to beat the favorite, Plainfield North. The Cougars looked like a team possessed after the gun went off. Matt Graham (Plainfield South) took an early lead to the race about 800 meters in followed closely by his teammates Riley Jepsen, Matt Jalcovik, and Grant Trentz. Coming through one mile the leader changed to Minooka's Mason Engler. Engler has not had the season he has wanted after being part of the Indians top seven last year and now not racing a varsity race since the first race of the year at the Normal West Invite. Engler tried to scare the competition by dropping a 5:18 first mile. Behind him was a pack that consisted of Ryan Maseman (Plainfield North), Graham, and Jepsen. In the second mile, the chase group caught the loose cannon Engler and added Ian Morrison (Plainfield North), Ryan Casey (Plainfield North), Jalcovik, and Tommy Adelmann (Plainfield Central). After going down a small downhill portion of the course after the two-mile marker is when Maseman made his move. He charged to the lead and didn't look back as he won the race with a 16:32.2 and in the process put 10 seconds on 2nd place finisher, Graham, in the final mile. The Tigers barely edged out the Cougars, as the Tigers placed 1st, 5th, 6th, 11th, 14th, 24th, and 37th to score 37 points while the Cougars placed 2nd, 4th, 8th, 13th, 17th, 40th, and 43rd to score 44 points. Both teams look to have amazing futures as they could be battling at state in two years. 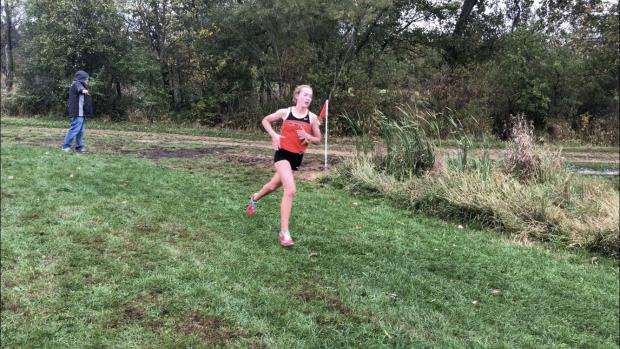 The girl's race was filled with surprises starting with the dominant performance of Vivian Van Eck of Minooka. Going into the battle it was expected to be a close battle between Van Eck, Isabelle Christiansen of Oswego, and Juliana Stogsdill of Plainfield North, but that was not the case as Christiansen and Stogsdill didn't have the race they wanted. The first mile went out pretty conservative as a pack of Van Eck, Stogsdill, Christiansen, Rebecca Corbett (Oswego), and Madison Zarembski (Oswego East) went out at around 5:46 for the first mile. During the second mile, the pack started to break up with Van Eck opening up around a five-second gap at the halfway point of the race with Zarembski and Christiansen trying to chase her down as they were also followed by Corbett who was five seconds behind them. Stogsdill really suffered here falling about 15 seconds off of the lead group as she was getting closely chased down by the Indians duo of Julia Dames and Kathryn Cichon. Going into that final mile Van Eck seemed to find another gear again crushing her competition with a time of 17:38.4 which was a 19-second win for the Indians leader. Following Van Eck's finish was surprising as Zarembski and Corbett ended up passing former All-Stater, Christiansen, in the final mile of the race. Stogsdill lost a lot of ground the final mile and ended up taking eighth place. The team battle was somewhat surprising as the Indians won the conference title for the eighth straight year. The Indians winning was not the surprising part here, as Oswego came very close to beat the Indians as they only lost by four points. If Christiansen had won the race the Panthers would have prevailed over the Indians. 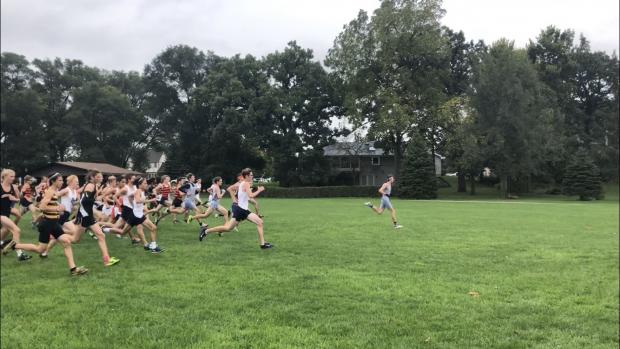 The varsity boys race was definitely the race of the day as it excited the crowd and kept them on their toes. Coming into the race it was expected that the favorite Christian Knowlton of Plainfield South would take charge early as he was by far the best runner in the field, but that was not the case as Luke Wentz of Oswego East took out this race fast with a 4:55 first mile with Knowlton following behind him at 4:58. Knowlton was followed by a pack of Wolves of Oswego East as Herbie Alvarez, Brad Wiggins, and Nicholas Bozarth came around at 5:02. Through the first half of the second mile, Knowlton tried making tiny moves to drop Wentz but was ineffective in doing so as Wentz seemed to each time retake the lead. At this point the two opened up a huge gap from the rest of the field by about 10 seconds, again following them were the three wolves. Minooka packed up great here as they were in 9th through 13th place with their top five runners. The chess game continued between Knowlton and Wentz until with a half a mile to go in the race, Knowlton decided he was done playing games with Wentz and dropped the junior hard. Knowlton retained his conference title he won last year with a 15:20.10. Wentz fell off a lot after Knowlton made his move and finished second with a 15:30.30. Oswego East completely destroyed the team battle as they walked away with the conference team title with a score of 26 points. The Wolves placed 2nd, 3rd, 4th, 6th, 11th, 17th, and 26th in the process.