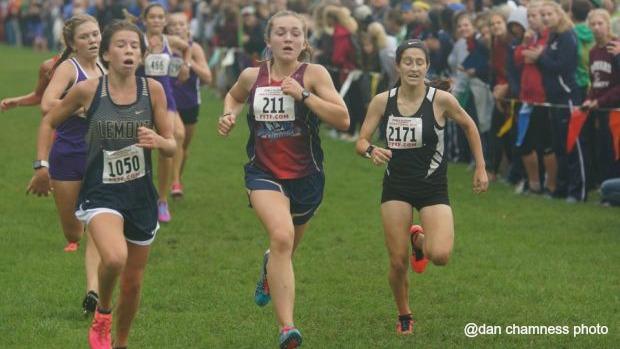 Inclement weather subsided by the time the 2A theatre action commenced. Top-ranked Belvidere North was more than ready to meet the challenge from what some termed a classic field. Those competitors included: #2 Vernon Hills, #3 Lake Villa (Lakes), #6 Mahomet-Seymour, #7 Dunlap, #8 Dixon

Belvidere North won a close battle over Vernon Hills in a huge field that featured almost 50 teams. The Blue Thunder had big numbers up front at the 1, 2, 3 spots and that is hard to overcome despite a hefty 1:47 scoring split. Junior Madison Diercks led the way in third place followed by junior Gianna Sagona's fifth-place spot. Conversely, the Cougars used a strong tight running pack running to stay intact and threaten themselves to the title. Senior Hannah Ray ran her best race since freshman year and jumped herself into the team's top role after being in the shadows. Unfortunately, Vernon Hills doesn't have a low enough stick at the moment to overcome Belvidere North's big three. Normal U High surprised several squads with a third-place finish on the strength of Ella Bittner's 11th place finish. That's good news and when Lyndsey Wolters returns as the #1 runner, this team will be even better.

Former team champions Dunlap ended up placing 5th, lead by sophomore Macy Priess in 13th place. Dunlap is still looking trying to put to the pieces together after losing many key seniors and some transfers.

Dethroning Diercks as defending titlist was sophomore Brooke Stromsland from Lakes Community. Stromsland won in 17:21, which is only 6 seconds behind her PR last year that scored her a 4th place finish at the cross country state finals last year. Freshman phenom Ava Parekh from Chicago Latin took 2nd place in her first high school 3-mile race with a nice 17:37. Unfortunately, the trip to Peoria for returning 2A state champion Jenna Schwartz of Waterloo was not a pleasant one. The Waterloo bus ended up with a flat tire, but the incident had no bearing on Schwartz who rode with her parents and was the only Waterloo runner. She ended up placing 7th overall. Other notable performances include a 4th place finish from sophomore Marianne Mihas of Chicago Latin, and 8th place finish from Cameron Hough, a senior from Richland County (Olney). Mihas won the 1A state championship in the 1600m the past spring, 6th last year at FTTF and 18th at cross-country state last year. Mihas and Parekh look to be a deadly dynamic duo. Hough's previous PR was a 19:04 from her freshman year and she ran an 18:22 to finish 8th.

Dixon came on top with 105 points, which is a pretty impressive season opener. Senior Collin Grady who placed 5th led Dixon. Closely behind him in 8th place was sophomore Brock Drengenberg. Drengenberg placed 146th last year and improved his time by over a minute and a half, Dixon continues to be a big threat in 2A.
Rockford Christian placed 4th overall in their 2A debut among a great group of teams. They battled hard against second and third place performers Kaneland and Burlington Central.
Junior Charlie Smith of Antioch was the overall winner with a 15:19 run. Smith finished 11th last year, behind a stacked field of seniors. The only non-senior who beat Smith was junior Anthony Farmer of Burlington Central. Farmer placed 4th this year. Senior Riley Wells and Rockford Christian had a pretty impressive 2A debut. Wells placed 2nd, narrowly getting outkicked by Smith. Other notable performances include a 3rd place finish from Kaneland junior Daniel Occhipinti, 6th place finish from junior Ryan Jones of Marian Central Catholic, and a 9th place finish from junior Max Beutel of Belvidere North. Occhipinti looks to pick up where former teammate Matthew Richtman left off. Occhipinti actually led most of the race, which is an improvement from his 29th place finish last year.
Tweets by MilesplitIL