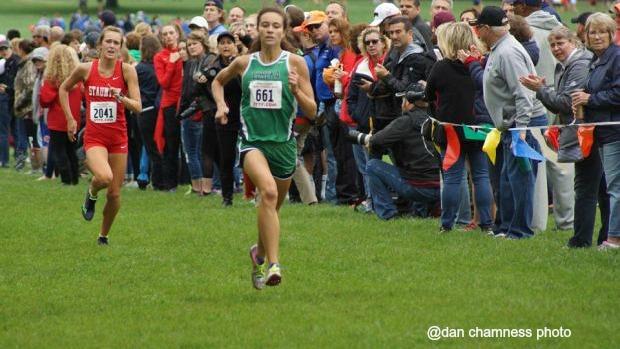 Peoria, IL
Despite the questionable weather and course conditions at Detweiller Park, the First to The Finish Invitational proved to be one of the top meets in the nation. This was the first major race for many teams.
The first race of the day was the Class A Girls and it featured 15 ranked teams- six of those ranked inside the top 10: #3 Stanford-Olympia, #4 Eureka, #5 Rock Falls, #7 Williamsville, #8 Rockford (Christian), #10 Liberty. As it turned out, several teams missed an opportunity to go toe to toe because of incomplete rosters. Eureka was a team that did not forsake the challenge. The Hornets put four runners inside the top 40 and the fifth one at 60th to hold off unranked Winnebago 129-167. The 'Bagos were a big surprise to many, led by sophomore Natalia Martino they placed 2nd in the team standings. Previously unranked, the Indians had an incredibly strong first 3-mile race of the season, earning some respect on their name.
Rock Falls was not able to recreate the success they had last year but still placed 3rd as a team. The Rockets have not raced since August 21st and still look to still be a strong team once they figure things out this season.
It may not mean much at the moment, but the overall performances here will go a long way mentally in determining a strategy for the state championship return in November.
The individual race prediction on paper was expected to go to 2017 1A state champion senior Emma Argo of Eureka, who entered the sweepstakes for the first time this season. Argo and challenger sophomore Lydia Roller of Staunton quickly asserted themselves as the ones to beat. Argo appeared to be the protagonist who led at every checkpoint. Finally, charging up the final straight and weaving through the major congestion of lapped runners, Argo held off the pesky Roller to win the race in 17:54 and remain queen of Detweiller.  There was a surprising lack of senior's in the top 10, with junior Caroline Jachino of Pleasant Plains in 9th, sophomore Alexi Fogo of Eureka in 6th, freshman Audrey Jenkins of Seneca in 5th, Martino in 4th, junior Payne Turney of Clinton 3rd, and Roller. Coincidently, Roller finished only .8 seconds behind Argo in this tactical race. 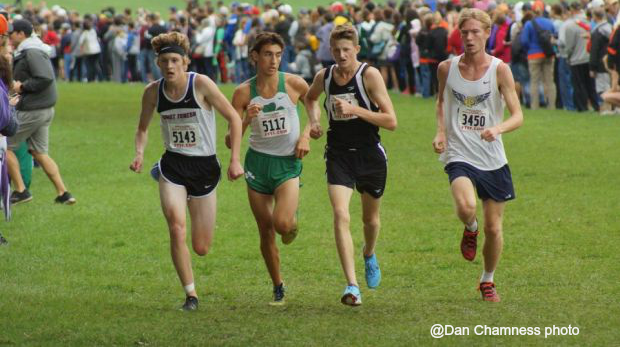 Stanford-Olympia boys came into the meet with high expectations as these paper rankings suggest:
#3 Stanford-Olympia, #4 Urbana University, #7 Elmwood, #8 El Paso-Gridley, #10 Athens, #11 Eureka, #15 Carlinville, #16 Clinton, #19 Seneca, #22 Rock Falls, #23 Pleasant Plains, #24 Steeleville.
Stanford-Olympia held form and waged a strong battle against the top five team placers. It came down to the placement of the pack and how things sometimes shift in the second half of the race. Fortunately for the Spartans, they were able to keep their scorers intact to the very end. Junior Jon Neville led the charge in 17th place. El Paso-Gridley showed a strong force of action with a 34-second scoring split.
Individually, senior Christopher Collet from Seneca took the win in 15:17. Collet is no stranger to Detweiller Park, placing 3rd at this race last year, 10th at state last year and 19th during his sophomore year. Interestingly enough, senior Logan Pietrzak of Fountain Central took 2nd place. If Fountain Central doesn't sound familiar, it is because they are one of the two Indiana schools making an appearance at FTTF. This was a very pack heavy race, as the leading group stayed together until nearly half a mile left in the race. Again with Rock Falls, a lack of races really seemed to hurt junior Dawson Smith who took the win last year and 4th place this year; at this point last year Smith already had three races under his belt rather than the one race he had on August 21st which he won solo. St. Teresa's senior Jackson Stewart placed 3rd and looked strong through the race. Other notable performances include a 5th place finish from sophomore Aryan Lalwani of Urbana U- High and a 10th place finish from Athens Junior Noah McIntyre.
Tweets by MilesplitIL