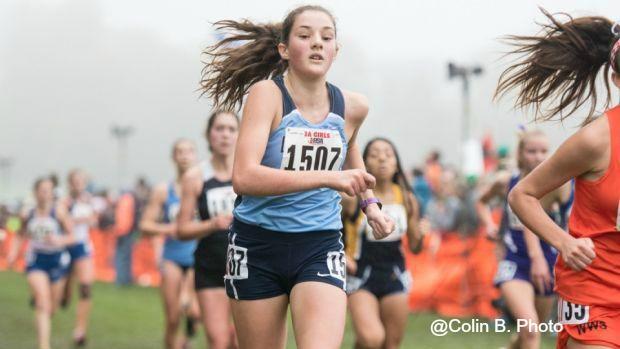 We are seeing three of the top runners in the state making their season debut here as Josh Methner (Hersey), Rory Cavan (Glenbard West), and Stephen Moody (Glenbard West) will be going at it. All three individuals had great performances at state last November with each one of them earning all-state honors. During the track season, Methner really set himself above and beyond Cavan and Moody when he ran a 9:06.65 in the 3200m at Distance Night in Palatine. He ran the 3200m three times outdoors and his slowest time was a 9:13.64 which he ran at Sectionals. The junior from Arlington Heights also had a great xc season last year, he took 7th at the state championship with a 14:36 as a sophomore. Cavan also had a great track season that saw him run 1:56.60 in the 800m and 4:17.34 in the 1600m. Cavan anchored his 4x800m team to a 3rd place finish at state this past year. Cavan took 14th place last year at the state championship with a 14:42. Moody ran 9:08.41 at Distance Night in Palatine to take 4th place, sadly that would be the only time that he was able to break 9:27 for the rest of the season. Moody took 18th place at state last year with a 14:43. The chase pack should include Ryan Buch (Hersey), Max Svienty (Hersey), Thomas McCarthy (Hersey), Jacob McDonald (Vernon Hills), Will O'Brien (Glenbard West), and Ian Repking (Glenbard West). The team battle will come down to two of the best teams in the state as Glenbard West and Hersey as they are the only two ranked teams in the field. This will come down to who has the tighter pack as both teams are so close together.

The girl's side will be an open race for the girl's individual title as Brenna Cohoon (Downers Grove South), Taylor Frommer (Hononegah), Lauren Johnston (Hononegah), and Melissa Weidner (Downers Grove South) all have an opportunity to take home the title. Cohoon didn't look at her best in the season opener at her home course as she took 3rd place running a 17:58. Cahoon was coming off her best track season she had ever had that saw her take 7th at state in the 3200m and break the 11-minute barrier on three occasions. She was definitely projected to be better than her first performance of the season. Look for her to try and have a great meet and defend her individual title that she won last season. Frommer had a decent track season that saw her break 5, but didn't come close after that. Johnston had a great freshman campaign that saw her run a 17:24 in the 3 mile, but she didn't have a good track season at all. Weidner was DGS's top runner last week and looks to stay in the same position for this meet. The chase pack should be within 10 seconds of these girls and it should include the likes of Becky Versaskas (Downers Grove South), Alicia Repka (Hononegah), Erin Reidy (Downers Grove South), Kennedy Warden (Downers Grove South), and Maria Ban (Palatine Fremd). We will see a few ranked teams here, but none are as dominate as the Mustangs are this season. DGS will be walking home with an easy money win.