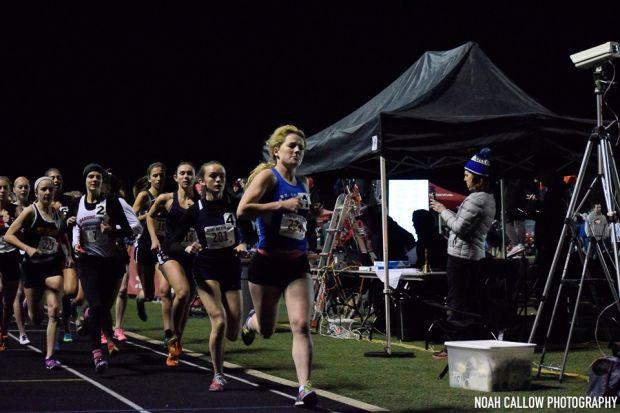 The precursor to any specialized event is getting the best talent available. Illinois is a vast state and with the weather conditions since the outdoor season began has been unstable- to say the least. So it should not a surprise coming in with decent climes, we all were going to expect something great to happen. Of course the historical effort in the morning at Glenbard West by Katelynne Hart helped! In case you were under a rock, she broke the all-time Illinois record for girls in the 3200m with a PAN FRYING HOT 9:52.02!!

From there it was the Distance Medley Relays that set the tone. Naperville North girls came in from a few hours of rest between their morning/afternoon meet at Glenbard West. All four members competed in the Sue Pariseau affair. The most notable team member is senior Sarah Schmitt. She took a big leap by running in that amazing 3200 in which she ran a lifetime best 10:25.95. She anchored her team to an easy win on the strength of a sub 5:00 effort which her team clocked US #15 12:12.54. More is in store for the Huskies if they go to New Balance Outdoor Nationals in June.

The boys side of the ledger saw the deepest distance unit in the state Downers Grove North come to fruition. The Trojans like some other units competed the night before in a meet. Jacob Ridderhoff led off for his team in 3:08. The 1200 leg is always fun to watch and it is a perfect combination of middle and long speed for a high school athlete. The lead would grow until York's Charlie Kern got his chance to slice into the deficit. Kern had been out for stretches in his senior year with an illness. He showed some glimpse of what is to come with a good 1:55 split for 800. The Dukes comeback against was short lived. The Trojans would pull away with a strong tally from anchor Miles Christensen who open the first 800 in 2:06 which led to a US #5 10:15.38. 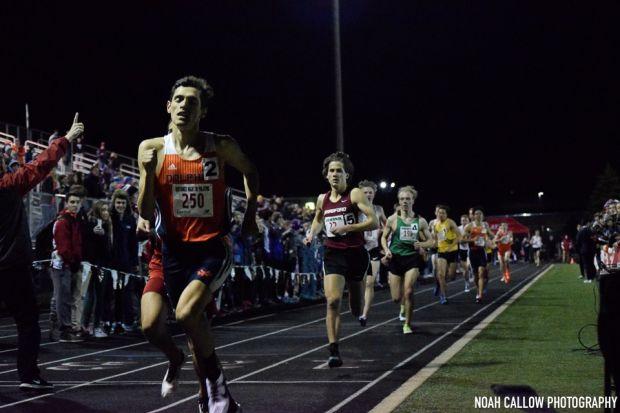 The Main event was simply amazing-

Rachel Hickey talked among some of her closest associates of the will to show out when the opportunity arises. As a senior student MileSplit Illinois intern from Lasalle-Peru, she has been up and close as to the ins and out of the sport from a journalistic perspective. Sometimes you can see things a little more vividly. So it was no surprise once the championship 800m got underway, the fast pace that defending champion Stephanie Kriss set, Hickey was able to cover. The two titans quickly separated from the pack and the first 400 in 62.3. Hickey was patient 500m in and it was at 600m that Kriss been to unravel. Hickey moved hard off the final curve home unopposed. She was clearly looking at the finish clock and wanting to break 2:10. It was close: 2:10.70. She got the meet record and US#8 time. It is one of the fastest times prior to the state series for a girl.

The boys 800m was not as sizzling as the girls but the same amount drama was presented. Shane Yamco of Riverton won the penultimate section in 1:55.61. That fast time meant the championship field could not sit and kick. Or could they? Believe it or not things went out very slowly in 57.7. That only meant that a few guys would be capable of producing a fast a negative split to get into the 1:53-54 range. One of those guys was junior Riley Wells of Rockford Christian. He has dropped 50.xx legs in the 4x4 relay as well as a 1:52.84 during sophomore year. Confidence was on his side as he held off Wes York of Waubonsie Valley 1:55.38-1:55.68. York took 3rd overall of course.

The girls 3200m was a fun one especially for Melissa Manetsch of Libertyville and Jenna Schwartz of Waterloo. Both girls are champion distance runners, especially Schwartz who the 2A harrier title last fall. After a tight pack in the early going, it was time to build off of a 5:12 opening first half. Schwartz and Manetsch traded blows for the next three circuits. Finally, inside of the final lap, Manetsch pulled away for the record win in 10:40.09. Schwartz ran a personal best 10:44.40 and a total of eight runners got under 11:00.

The boys were up for the task in their 3200m run. The opening lap in 64 stayed consistent as they hit the first half in 4:32. It was possible that a meet record could be had if the pace quicken. It stalled. It was 8:03 on the bell and several runners got clipped with 200 to go and then near the finish line, it happened again. Tommy Brady of Maine South went down near the finish line. He and Marcos Garcia of Waukegan nearly collided. Twice it was Josh Methner of Hersey surviving and with the spoils go the victory in 9:06.65. Garcia's 9:07.09 was impressive as was Brady in 9:08.21.

The girls main event was the 1600m. There was several quality choices to choose from prior to the race. Big names included Madison Marasco of Schaumburg and Jocelyn Long of Barrington. They know the Palatine track well from MSL battles. It was fitting that both seniors would drop from their primary events and meet in the middle. Speed vs. distance. But someone forgot to include a freshman name Marianne Mihas of Chicago Latin. She is someone that was demanding respect because of her success as a middle schooler. Last year she ran 5:01 for the distance and in most years that is front page news. It was tight group for nearly three laps until Mihas made a jail break on the last circuit. Marasco has the speed but she got stuck in her high gear with 100 to go. Long charged hard on the outside but that was not good enough to reel in Mihas who won in 4:55.68. Isabelle Christiansen of Oswego had been in position earlier took fourth behind Long (4:56.06) and Marasco (4:56.56).

The grand showstopper was loaded to the rim with talent. Clayton Mendez of Chicago Whitney Young, Danny Kilrea of Lyons Twp, Drew Bosley (Wisconsin), Jacob Gebhardt of Sterling, and more. The opening lap saw Mendez and his teammate Sam Rivera upfront in around 59-60. They would hold on for the next half lap together before more would join in. It was 2:04 at the halfway mark. The bell was all Mendez who pushed himself to the limit and broke a losing streak against big competition. Ironically, Mendez tied the meet record and nearly got a league one with his US #2 4:08.64. Ansel Fellman of Bradford, WI took second in 4:09.75. Thomas Shilgalis of Naperville Central got his breakout effort clocking 4:10.70 and Bosley dropped a 4:10.75.