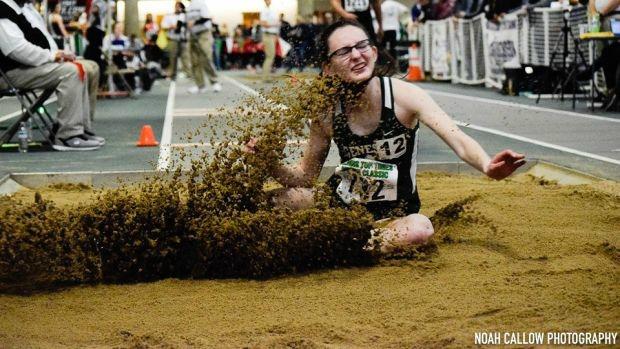 No messing around in the girls field events-

Coming into Saturday's morning's session the debate was how good the girls long jump competition would be. The top two and three of the first five leapers would all meet in the sand. Geneseo senior Erika Furbeck came in as the "underdog" despite having the top mark in the state and US#3 at 20-1. All eyes were on fellow senior Imani Carothers of Chicago Brooks College Prep whose US#5 19-11.75 was just 2nd best in the state. How about Springfield Southeast junior Serena Bolden who was the third competitor entered at US#9 at 19-6? Too bad the state isn't under the former two class system because Bloom Twp senior Hannah Morris would make four and her season best 19-10 is US#6.

The action literally took off at 9:05am. The capacity crowd was already anticipating a great battle starting with the girls long jump. Carothers was the first to strike breaking her own record with a 19-6.5. Immediately it was Furbeck who countered with a 19-8.5 bomb. The mark would stand up because Carothers conceded her final two attempts to concentrate on the hurdles and dash that was coming up. Bolden was also slated to compete in the short dash. Bolden ultimately placed third in 19-4.75.

Just like the long jump, the Pole Vault was packed full of top talent. It featured five girls who five girls who cleared 12-0. All five were in this classification. The state leader senior Aliyah Welter of Monticello led the charge with a 12-6. The goal of course was to get to 13-0 and possibly more. After her competitors Josie Held (Mt. Vernon), Stephanie Jacobs (Freeburg), and Samantha Spencer (Providence Catholic) bowed out at 12-0, it was on to 12-6. Welter cleared the familiar height and moved to 12-9 where she ended the competition as a repeat champion... Bolden continues her status as the top triple jumper in the state. With Carothers not in the field, the path was cleared for Bolden improve on her personal best 40-8.75. Bolden did not have any competition and she won by over three feet

The class leader in the high jump was junior Sarah Flight of Charleston. But the defending champion is sophomore Diamonasia Taylor of Urbana. Taylor has been virtually untouchable indoors only losing once in two full seasons. That loss? It was to the best jumper in Illinois history Jelena Rowe who cleared 6-0. After waiting her turn on Saturday, it was time for Taylor to win the event. Flight tapped out at 5-4 and Taylor continued on to 5-7 and then to 5-9. She succeeded past her record 5-8 for a new state lead. The bar was raised to 5-10. Unsure of her approach Taylor was unable to match the attempts. It will be a matter of time before Taylor breaks into new territory... Nikita Maines of Centralia picked up where her cousin Latavia Maines left off- with a victory in the shot put. Maines outlasted the 10-person event with a 40-3.5 effort.

Carothers did not waste any time in her hurdles prelim, running 8.54 for an all-time record. No one else broke 9.00. The final looked like a repeat with Carothers rolling over the barriers without much resistance, winning in 8.56.

In less than 20 minutes the dash prelims took place and she would advance to the final behind leader junior Kiara Pauli of Dunlap's 7.68. Pauli would go on to win her first indoor title in 7.66 and Carothers was second in a very happy 7.72. The speed play is only going to improve Carothers for the 100HH.

Last year Mt. Vernon junior Tredaja Harris took 5th in the 200m with a time of 26.14. This time around running on an outside lane, Harris refused to let anyone break stagger on her and result was a personal winning 25.65... junior Jayla Campbell of Rich Central had a tough time in the jumps that featured her left shin being wrapped. But for less than a one minute she was able to concentrate and win the 400m in 58.01.

The first race of the day featured some of the main players from cross country. Jenna Schwartz of Waterloo would square off against Campbell Petersen of Dunlap again in the 3200m. The junior vs. the freshman, the veteran vs. the rookie. It was a good race throughout the 16 lap affair. Schwartz hit the first mile in 5:27 which enabled her to stay in control. Schwartz finally pulled away from Petersen for a season best win 11:03.46-11:15.21.

Lasalle-Peru senior Rachel Hickey came in as defending champion and one of the top 800m runners in the state. She also wanted to break Karina Liz's record of 2:13.1. It is tough to do when no one wants to push the pace or set a record attempt that benefits all. Hickey led Brooke Delahanty of Aurora Rosary and Gillian Fiene of Illiana Christian during the early portion. Things began to tighten up on Hickey but she was able to maintain her poise and win in 2:16.50.

Petersen got a split in the 1600m when her poise paid off. Running like a crafty veteran, she trailed Schwartz and teammate Franny Verville for almost the entire race. Verville caught a fading Schwartz with less than 100m remaining. But it was Petersen's leg speed that surpassed Verville for the win in 5:11.35.

Dunlap started their sweeping ways off with in record form in the 4x800. The Eagles briefly trailed before taking over and ultimately taking over and winning in a record 9:41.63.

Dunlap need some assistance from speed queen Kiara Pauli on anchor to win the 4x200. The Eagles trailed several teams Urbana and Springfield Southeast. Pauli would put her body in motion and save the day with a time of 1:46.72.

Dunlap took the final event of the day in 4:07.21 besting Chicago Lindblom in the process. 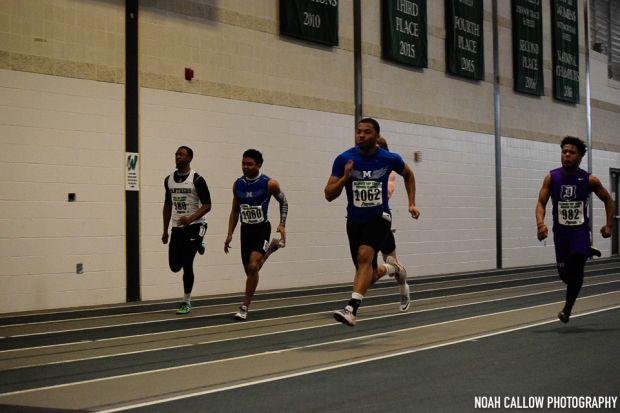 Ron Reed dominates the 60m field in near record time

Ron Reed (Sr., Decatur McArthur)- Reed re-emerged on the sprint scene last weekend in Charleston after a previous long absence. Despite a solid 6.88 60m clocking at EIU, the talk in the track circles is what would he do now in his biggest pressure packed meet of the year? Reed set the tone for the final with a 6.88 prelim run. Still there were some doubt in the air if he could pull off the victory. The gun shot off and like a ball in a cannon, Reed was clear of the field in an instant. When he crossed the final line, the unofficial time flashed 6.79 and then the official mark of 6.82 confirmed his greatness. Reed just missed his predecessor Jonathon Boey's all-time mark of 6.79. Boey, also from McArthur HS, set the mark back in 2013. Reed concludes his indoor season with IL #2 mark and the confidence entering outdoor season.

Mathias Powell (Jr., Mahomet-Seymour) came in as the favorite in the 3200m after he scored a big win over Logan Hall (Sr., Arthur) at the Charger Invite in early March. Powell and his teammate Ryan Hodge was among the pack featuring Charlie Parrish (Sr., Freeburg) and Stephen Poorten (Sr., Sycamore). Parrish would battle Powell who separated from the group in the second half of the race.  Parrish outlasted Powell for the win 9:22.79-9:24.50.

It was unfortunate that Bret Dannis (Sr., St. Bede) could not compete due to injury. The 60HH door was left ajar for Solomon Wilson-Walls (Sr., Tinley Park), Deion McShane (Sr., Freeport), and Niko Neal (Sr., Harrisburg). In the final, it was a very close battle between Neal and Steven Migut (Sr., Unity) but Neal prevailed in 8.04.

Jacob Gebhardt (Sr., Sterling) did not emerge from the 1600m until very late into the contest. It did not help matters that the pace went out slow. It allowed to Gebhardt to kick all out over the final circuit to win in 4:26.44.

Sophomore Hunter Hendershot of Mahomet-Seymour won his first shot put title with a toss of 56-5. Hunter trailed Dunlap senior Austin Klokkenga the entire way and then on his final attempt, was when he launched his winning toss.

The absence of the state leader in the triple jump Andra Ward of Cahokia had to pull out of competition because of an injury. Alex Saunders of St. Laurence was in a dog fight with his competitors until he dropped a bomb on his final attempt. The mark sailed 44-05.... Saunders also won the long jump with a leap of 22-3.5 on his final attempt.