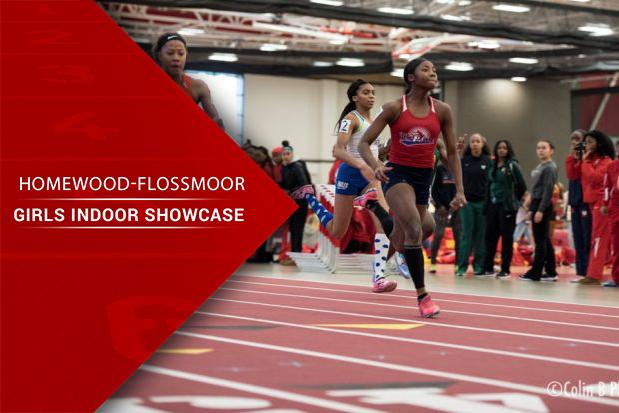 Homewood-Flossmoor Girls Indoor Showcase
Date/Time: Sat., Feb. 24/9:45am
Location: Homewood-Flossmoor HS; Flossmoor IL
Meet Info: Meet Program
How To Watch: Milesplit live stream
Team Power/Premium Individual Rankings: Week 2 /  Premium 2
Track News: Milesplit Illinois I Milesplit
Social Media: @milesplitil
Meet breakdown:
[Field]:
Those in attendance are going to get a treat. It will start with the jumps. Specifically it will be the triple jump that eyes will be captivated on. The state's top returner and #2 all-time/all-conditions is superstar senior Imani Carothers of Chicago Brooks who leaped a sickly 42-10 last year. That feat itself is mind boggling and it could put the field on notice. Carothers has not tripled yet this year, but that should not deter her from performing well. The emerging Camille Osborne has quietly sharpened her blades since the summer track season. The Rich South senior jumped 38-7 in very limited action. Last weekend in Lexington, Osborne took third placeIt is evident after competing at the U of Kentucky HS Invite and finishing second, Osborne wants to do more. Serena Bolden appears to be ready. The junior from Springfield Southeast comes from a great jumping lineage. Last season Bolden etched her name alongside some former greats when she leaped 41-2.5 (+1.2) to take 2nd at the USATF Junior Olympics Nationals. At the Evanston Open last weekend, she landed over 39 feet. Unfortunately they do not count marks at Evanston officially. That will change on Saturday.
The long jump will be just as talented with 19 footers Carothers and Bolden among the entrants. Carothers did not have her best day last weekend at UK, but expect her to bounce back and make it very difficult for Bolden and Ameia Wilson of Danville to gain traction.
[Distance]:
Jocelyn Long will again be the center of attention in the distance races. She kicked her 2017 season with a big win that would ultimately lead to a banner campaign. Look for the Barrington senior all-star to win the 3200m and 1600m in record time... the 800m will be the most competitive event in this realm. Several at-large entries will assist with fast times. At the top of the state leaderboards are Mikenna Robinson (Neuqua Valley) and Shaheeda Dade (Chicago Lindblom). Robinson has come into her own as a junior with some solid marks in the 400 and now the half-mile. Her personal best is 2:17.20 and it is IL #4. She will have an opportunity to move up the charts on a fast HF track. The same with Dade who has impressed during the undercover season. Dade has been hovering around the 2:19-2:20 time zone, but at any given moment she could bust out and open some eyes real wide. Don't forget about cross country sensation Shanice Garbutt of Danville. She is entered here and don't be surprised if she drops a solid time. Garbutt's all-time best is 2:16.84.
[Sprints]:
Let's start with the 60HH. Carothers will duel against Kayla Walters of Bolingbrook. Both girls of course are among the best in Illinois with Carothers starring in the 100HH record books and Walters as the 3A runner up in 2017. They both come in IL #1 and #2.
The championship section of the 60m is loaded with talent. Dajour Miles is the defending champion in what may the West Aurora standout junior's third best event. Ameia Wilson and 3A 100m  2x state champion Amira Young of Chicago Whitney Young is here. That means we have IL 2,3, and #4 speedsters in the field! The #1 speed demon is Bella Uscila and she will contest the 400m as an at-large entrant. The senior from Elgin St. Edward is looking to expand her resume and get into a new zone against Miles. Miles is the state champion here and current state leader at 54.14. Raven Moore of Springfield Southeast is also entered in the field. She has run 55.45 dating back to last year... the 200m will see Miles vs. Wilson one last time. It could be a state best effort when the dust settles.
Let's drop relays here. Whitney Young has the top seed in the 4x800 at 9:51. The 4x200 could be the most competitive one with IL leader Homewood-Flossmoor loading up. The 4x400 will also have the host Vikings entered but who knows if they truck out their top squad.
Tweets by MilesplitIL