Championship morning started with fog, gray skies, and tough batch of mist that could be mistaken for light rain. The famed Detweiller Park course in Peoria was in excellent shape early on, but it would eventually take a hit through wear and tear. Overall, the intensity of the state meet is like no other. 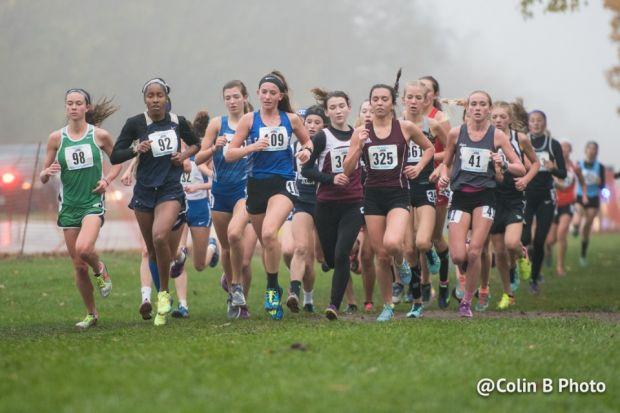 The intense battle of cross country racing during the opening mile

It was kind of surreal to see a new face emerge from the fog and it not be Anna Sophia Keller. The former superstar from Effingham (St. Anthony) had won the previous four state titles before moving on to the University of Notre Dame. Behold Eureka junior Emma Argo who finished 8th a year ago stepped forward as a championship candidate. Argo would battle Nygia Pollard of Elgin (Harvest Christian Academy) for most of the final mile before pulling away for the victory in 17:34.

#1 Tolono (Unity) maintained their mid-season domination to defeat #3 St. Joseph-Ogden 108-110. Both teams were virtually deadlocked woman to woman, and it came down to Unity's first three runners whose score was just a little lower than St. Joe-Ogden. #4 Monticello took the third place trophy with 181 points.

Wyatt McIntyre (Sr., Athens) was the top returner coming in but you would not have known it though. The talk of Class A was of Logan Hall (Sr., Arthur). Hall had competed well all season long against all runners of all classes and beat McIntyre just a few weeks ago. After a first mile in 4:47 that featured several runners, it was McIntyre, Hall, and Jack McNabola (Sr., Chicago Francis Parker) who ran together through two miles in 9:40.

McNabola would take a calculated chance and jail break from the pact with 1200m to go. Unfortunately, though, the move would prove near fatal as McIntyre and Hall regained their focus. The end result was McIntyre wearing down his future U of Illinois teammate Hall for the win in 14:25. "I really didn't feel any pressure, I thought Logan had the pressure, [because]  he came off of a state championship in track," McIntyre referenced the load on to Logan and allowed him to complete freely. McNabola, completely out of gas, made it home to finish third in a personal best 14:41. Alex Helmuth made good on a senior year to take fourth ahead of the reigning 800m state champion. And it was the Trenton (Wesclin) freshman star and perhaps future of the event Justin Mumford capturing fifth place in 15:05.

#2 Elmwood was laying in the weeds for their opportunity to pounce on the first place championship trophy. #1 Elgin Harvest Christian Academy was favored to capture their second straight title, but they came up a little bit short. Rockford Christian had good vibes on Friday as they were relaxed and confident behind top runner Riley Wells. The Royal Lions would have to settle for the runner up spot. Elmwood used two all-stater seniors Cooper Hoffmann and Trevor Dunkel and a timely fifth runner to close out the Trojans 8th state championship.