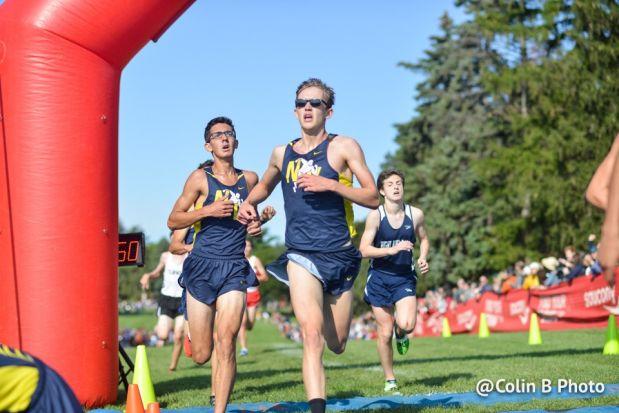 -The race went as expected with the key notables #Neuqua Valley, #5 Wheaton-Warrenville South,  and #7 Hinsdale Central getting the jump on the field. As the scrum began to sort out a front pack of about nine runners emerged heading toward the first mile. Among them were Zach Kinne (Neuqua Valley), Brett Haffner (Hinsdale South), Sean and Scott Maison (Wheaton-Warrenville South), and William Hauenstein (WWS)- they all cruised past the clock in 5:00. It was a steady diet of runners that streamed by onlookers and toward the infamous creek. New Trier's top runners appeared to join in the race for top three or four halfway through. But it would be Kinne that took advantage of his opportunity and broke away from the pack as they ascended the slight incline near the second mile. Kinne was all alone now as he hit the checkpoint in 10:00. WWS had four runners in the top 10, but the Wildcats of Neuqua Valley had guys moving into formation.
The most exciting part of any cross country race is the final mile. It is where general and experienced fans alike can consume the same excitement and thrill that is about to come. For the Wildcats per the meet announcer, they were charging hard. Ryan Kennedy (Neuqua Valley) made his move to overtake Pat Norrick (New Trier) into second place. Though Zinne cruised home three seconds ahead of his teammate in 15:07, it was a total team effort that made the day. The Wildcats put all five scorers among the top 20 and the 7th man displaced in the 22nd spot if needed. Hinsdale Central, with its new outfit due to graduation, looked very strong as well over the final mile. The Devils will be a strong team this season for sure. As for the Tigers, they would finish a distant third as their 5th man closed things out in an "ouch" 74th place. But things could resolve itself in the near future because sophomore David Zeller placed second in the sophomore race in 16:13. Assuming that he would have ran under the same stress with varsity competition, he would have lowered his team's score to a more respectable 63 points.
Tweets by MilesplitIL