Chester, Illinois was the host site for one of the class 1A regional's Saturday. 16 schools competed in the regional meet with hopes to advance on to the sectional meet next weekend at Southern Illinois University-Edwardsville. 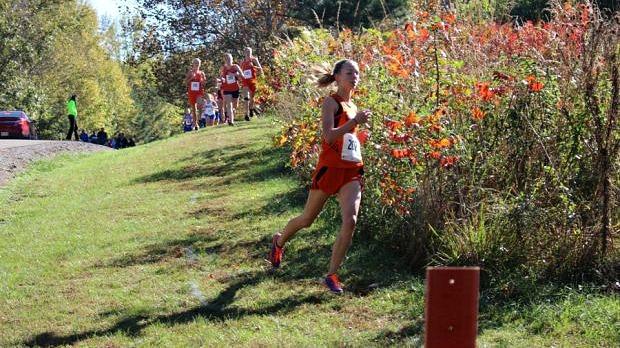 The girls race saw only one time under 20:00 at the scenic but rugged Chester course (Tracy Burmester photo)

The girls' race was led by freshman Gabby Alongi of DuQuoin.  Running alongside was Carterville's Megan Adams; each pushing the pace to secure a place in front.  The two were side by side half way through the race, but Alongi was able to break away from the other runners to finish 30 seconds ahead of the second place finisher.  Alongi's finishing time was 19:53 on the hilly three mile course.  Finishing in second was Megan Adams of Carterville with a time of 20:23.  Also placing in the top five was Sabrina Kollbaum of Nashville in third, Abby Riechmann of Okawville in fourth, and Taylor Dunning of Chester in fifth.

Running for Nashville was Junior Brandon Schnitker who set the pace for the boys' race.  He was alone out in front, but not too far back was junior Grant Batteau of Pinckneyville.  Austin Knight of Carterville followed close behind as well.  Knight, who had won the Chester Invitational just earlier this year, was a likely candidate to be in the front pack.  Schnitker retained his lead however, and ran strong to the very end to place first with 10 seconds separating him and Batteau, who placed second.  Schnitker ran a time of 16:21 to be able to better his previous time run on the course earlier this year. Knight placed third with a time of 16:38. Taijhan Nelson of Murphysboro came in fourth, and Garrett Johnson of Pinckneyville placed fifth.

The Pinckneyville boys' team and the Nashville girls' team were the regional champions. Both teams will be running at the 1A sectional at the SIUE cross country course in Edwardsville, Illinois next Saturday.  The other six teams to advance to sectionals on the girls' side are Okawville, DuQuoin, Chester, Pinckneyville, Carterville, and Red Bud.  Boys' teams also advancing include Steeleville, Nashville, Red Bud, Murphysboro, Marissa, and DuQuoin