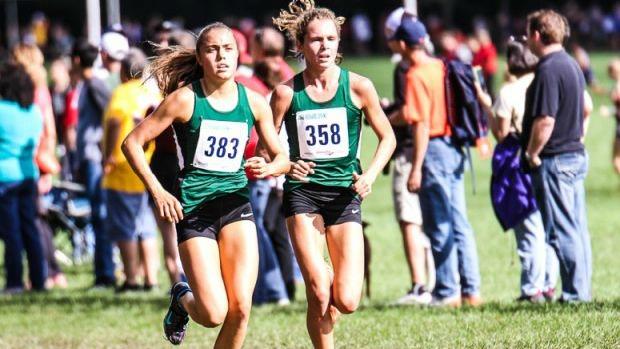 For the girls it's not 1, it's not 2, it's not 3, it's the top 4 teams in the large 3A classification that are entered in what is considered the meet of the year outside of the state championship. Last year then #1 Naperville North won This meet will once again thrill a large crowd with the absolute best teams in the state. This meet is so loaded that 9 of the 10 entrants are ranked and it is in a sense a state championship preview. Glenbard West has blitzed through every meet this season on the strength of the state's numero uno tandem junior Lindsey Payne and freshman Katelynne Hart. They have been unstoppable since their introductory meet at Hinsdale Hornet-Devil Invitational. The Hilltoppers have shown themselves to be more than a one two punch as #3 runner sophomore Katie Hohe has been the bridge from top to bottom.

Naperville North do not have a star athlete like record holder Judy Pendergast this year, but they appear to have more balance from top to bottom.The Huskies have five girls who has broken 19:00 which is a sign of a good pack. At the recent Roy Griak Invitational in Minnesota, the Huskies earned a fifth place finish by junior Sarah Schmitt. Behind her was a strong pack of teammates that closed things out in 1:16 and with it came a third place trophy in one of the top invites in the country.

Pre-season #1 Minooka is ready to duel in this affair according to coach Kevin Gummerson. "[There is] nothing like mid-week battle like this," he said with supremacy enthusiasm. "We are looking to use this another battle to get us ready for the state series. I am looking to see how the team responds to this level of competition. I can't wait!" The Indians of course have the state's best trio in Ashley Tutt (Sr.), Emily Shelton (Jr.), and Mackenzie Callahan (Sr.). They of course usually finish in the top 5-10 in every race. Minooka is waiting patiently for fifth runner Julia Dames to develop. She is only a freshman running two minutes behind her leaders.

Yorkville lost to Naperville North by a point at the FTTF 82-81. It was close all around battle with composite times, scoring split and grit. The Lady Foxes usually band together throughout the race producing scoring splits under 1:00 like in a dominating performance at Palatine Invite several weeks ago.. They could be victorious if #1 runner sophomore Nicole Greyer can get the scoring pack to stay close. Senior Alexis Grandys has had tremendous success in her career, but that BIG performance of the season has not arrived yet.

The individual race will be a rematch of sorts between Payne, Hart, Tutt, Shelton, and Callahan. When they met at Hinsdale on the first weekend invite racing weekend in early September, it was Payne who pulled away in the last half mile for the victory. Tutt was runner up and Hart third in her introductory race. That was the last time Hart lost a race. She has adapted well to big time cross country and will go into this meet as a slight favorite.

Glenbard West coach Paul Hass' pre-race reaction:
Getting prepared to race again on a short turnaround is nothing new to teams in the West Suburban Silver.  In the not too recent past our conference dual meets were held on Thursdays with a big invite the following Saturday.  When those Thursday meets counted toward conference standings you had no choice but to go all-out at every level.  When we raced at Peoria following a tough Thursday we often did pretty well so I think we'll be fine.  As far as the meet goes, there is no question that the competition is great, but we hope that that will result in teams pushing one another to bring out the best in each athlete competing, and that makes it fun.  When all is said and done though, no state trophies will be handed out so you have to treat the meet for what it is, whether you run well as a team or not; it's all about perspective.  Quite frankly, we are looking forward to running on a course that has not been decimated by rain before or even during the meet; we've been running through slop or soggy conditions in each of our four invites this year.