The 800 meter run sounds incredibly similar to a hybrid doesn't it? Well, let's take a look.

The 800m is the "hybrid event". It takes a great amount of speed and endurance to truly become great in this event. But is it a speed or endurance event? Maybe it's both. Is one aspect of training more important than the other? Yes and No. But over the years there have been many debates on whether the event is a distance or speed event. The way we answer that question greatly affects the way we train the event.

The issue with training any event is how you view the event. And to view the event properly you must first understand what the events constitutes. What are the needs and demands of the event? Well in the case of the 800m many coaches have classified it as a middle distance event. Many coaches contemplate over whether they should train the 800m runner with the sprinters or distance group. I say neither. They are their own group. Many coaches will train 800m, 1600m and 3200m runners in the same group. I believe this is a major flaw and is one of the reasons that 800m runners are not running faster. This changes the approach to racing and training if we think of it as a distance event. There have been good results from this but I don't believe we have been training our athletes to their full potential in the 800m.

The event has been viewed improperly by most. The 800m race itself is definitely more aerobic than anaerobic with the ratio being 60/40%. But both systems are always working together during the entire race. The shorter a race the more anaerobic the race is. The faster an athlete runs a race, the more anaerobic the race becomes for that person. But nonetheless you have to be able to sprint to run a great 800m! The race needs to be treated much more like a long and controlled sprint. We have to get out of the habit of treating 800m runners as if they are 2 milers. It is not a throwaway event nor should the training for it be generic. The 800m race has much more in common with the 400m that it does the 1600m or 3200m. It is the only "distance" race where running positive splits results in the fastest time possible. 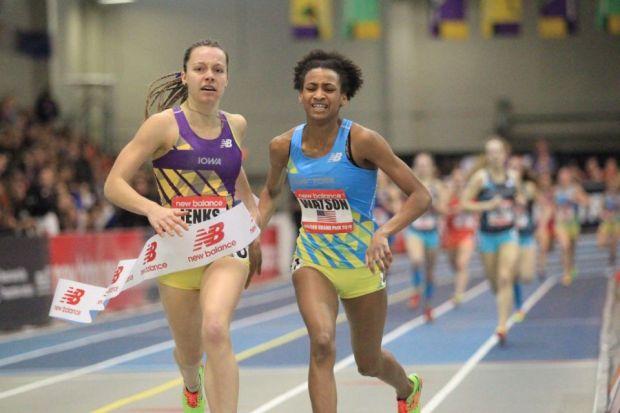 800m runners need an "aerobic base." But this does not mean long slow running. We have to start training them much more like sprinters. Most coaches will take the athlete capable of running a good 400m in high school and allow them to just train for the 400m or even 200m instead of moving them up to run the 800m. This is a disservice to the athlete. Our jobs as coaches is to put them in the best possible position to succeed. We as coaches need to start thinking about long term development. Will this athlete get a scholarship in the event that they are running for in high school? Will they even have a chance of becoming an all-state athlete? If the answer is no then change it. Distance does not take away from speed.

Many coaches are stuck on the old school model that the 800m is a distance race. Do a ton of slow distance for months. Do some V02 and tempo work. And then shift to some "speed work." This is not good training for the kids. Also 400m repeats is not speed. I think everybody responds to different types of training and you will get athletes to run well in the 800m but not as fast as they should.

The 800m combines a lot of training zones and speeds. It is not an all out sprint. No race is after 60m. I like to think of 800m training as a tug of war. You want to keep a nice balance between speed and endurance. This has to be done year round for the 800m runner to be at their best when state or nationals rolls around. You have to find that right blend that allows the athlete to hit all the training zones while still recovering. Training will be maximized if all training zones are hit and the athlete will not over train one area nor neglect any others.

Endurance is easier to train than speed. I think 99% of people would agree with that. When we look at a 400m runner we think that the person with the fastest 200m time has the potential to be the fastest 400m runner if all other training conditions are the same. If two female runners want to run 60 seconds and Runner A runs a 27 second 200m while Runner B runs a 28. If they both come through the 200m at 28.5 then runner A is running at lower intensity of their all out max then Runner B.  I believe that this same principle applies to the 800m. The faster an athlete runs the 400m  the greater potential they have to run a faster time in the open 800m. This person is running at a lower intensity for the first lap of the competition than somebody with a slower 400m time.

As coaches we should be looking for the best possible training for our athletes. Training philosophies change over time because scientists and coaches learn more about the human body through trial and error. With more knowledge and resources available it is unacceptable for our athletes not to be running faster. Just because it worked in the 1980s or 1990s doesn't mean it works in the present. The other day I looked at the top 800m runners of all time and more than 90 percent of them that had ran 1:42 or faster had ran a minimum of 46-mid for the 400 rather it be open or relay. The moral of the story is speed kills... anybody who doesn't have it is at a disadvantage. Next time you hear a person saying that distance training has a negative effect on speed ask them to show you the deleterious effects. Training is what you do, not what you don't do!