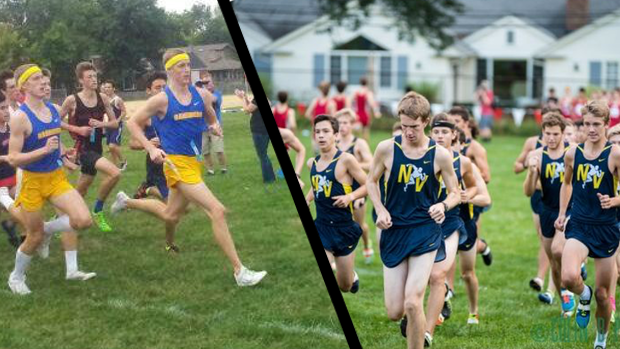 #1 Orland Park (Sandburg) vs. #2 Naperville (Neuqua Valley) might as well be Goliath vs. Goliath. With all things considered both teams are equals (more on this later).

It has been very warm throughout the state over the past week. So it's safe to say that every runner competing on Saturday is acclimated to the climes. But it is or has rained in the Peoria metro area and that could either spell relief for the athletes or doom for a fast course. If last weekend's blazing times are an indicator of what is to come, Peoria Notre Dame will be a treat to watch.

The two top teams in the entire state will duel for supremacy for king of Illinois at the legendary Detweiller Park. By all accounts it seems as though both crews are on equal footing. Sandburg coach John O'Malley indicated that he is going to hold out one of his supreme runners Chris Torpy. "We are not going to race Chris Torpy this weekend," he said alluding to the fact that he wants his team to step up more. Torpy is not hurt or being disciplined. "Watch his anchor leg last spring or his 800 final and you'll realize how tough that kid is and why I'm confident in him... I'm looking for some other guys to step up and not rely on Chris, so that is the expectation this weekend."

Neuqua Valley on the other hand will be a man short as well. #2 man junior Scott Anderson suffered an injury to his fibula during the team's first meet of season at Hinsdale. He has been shut down ever since then. "Scott will hopefully get his boot off at the end of September assuming he is healing properly," said his coach Paul Vandersteen. These are very optimistic words of course coming from a coach who already has tremendous depth. One person of interest is senior Austin Kinne. Kinne ran 15:29 at the Detweiller at Dark meet in July. "Austin had a stress reaction in his shin so we shut him down for 2.5 weeks," said Vandersteen. "He ran 30 miles last week and will hit approximately 40 miles this week."

The key to winning any super-sized meet featuring over 60 full teams is getting out a little more aggressively than normal. Every team will have 10 varsity runners to play with- adding to that importance of depth we highlighted earlier. Sandburg defeated a great Lyons Township team in its first meet only because they were able to corral their horses in a 17-second scoring split. The Wildcats countered with a 10-second spread at the much more deeper Hinsdale Invite. Senior Connor Horn placed third in that affair just several ticks away from Hinsdale Central junior Blake Evertsen. Eversten has been racing bananas in the early going. So in effect, who ever can strike with a balance of front running and pack playing will have the upper hand.

The cup board is full-

The Dukes of York will keep their tradition of starting invitational season later than almost every team in the state. It will indeed be a coming out party for the Dukes who had been dabbling around in a dual/tri-meet or some intense workout. Sophomore Charlie Kern Jr will lead the charge for his team. Kern will be expected to be up and his supporting cast should be in the vicinity fighting with other top units. That unit ran between 15:18 and 15:30 last year. Let's see if they can be just as fast on Saturday.

Lake Zurich will exit their exclusive training stage this weekend. The Bears will of course lead with junior Matt Pereira. But this squad is more than Pereira though. Do you remember when Matt was a freshman and his fellow mates Kyle Griffith, Matt Millner, and Brian Griffith were with him? They are still running strong and will be that group who will look to get into the state trophy chase in November. Tomorrow the goal will be to finish in the top five. The scoring pack will need to finish within a minute of Pereira.

Mahomet-Seymour is a respected program throughout Illinois after placing second here last year. They have been tabbed the top ranked program in 2A and will have something to prove to themselves again against the top tier 3A schools. Senior Alex Keeble will be doing the front running for his team. The Bulldogs ran well on scorers 2-4 but the #5 man was a little off- 35 seconds off. Unless someone was sick or missing, this cannot happen in a huge field and it can't happen against teams who are comparable to the competition they will face in their own classification at state. One of those teams within the field of battle to challenge the Bulldogs is Hinsdale South. The Hornets are an emerging but strong team who have the makings of a trophy grabbing group in November. This will be Jim Dickerson's second test of the season, but first test against a team who they will see when it counts on November 7. Seniors Roman Drabchuk and Charlie Nodus will lead the Hornet's attack.

In effect, the Richard Spring Invite will be a manifestation of young man vs. young man if you will. Nearly 70 teams in all and some of the teams at the lower tier of the rankings regardless of classifications will do extremely well at Detweiller. Don't forget about the traditional powers that are not ranked such Palatine and Naperville North. They are rebuilding their teams back up and wouldn't it be great for them to surprise a few foes?

St. Joe-Ogden and Monticello will fight the Class A battle with Pleasant Plains.