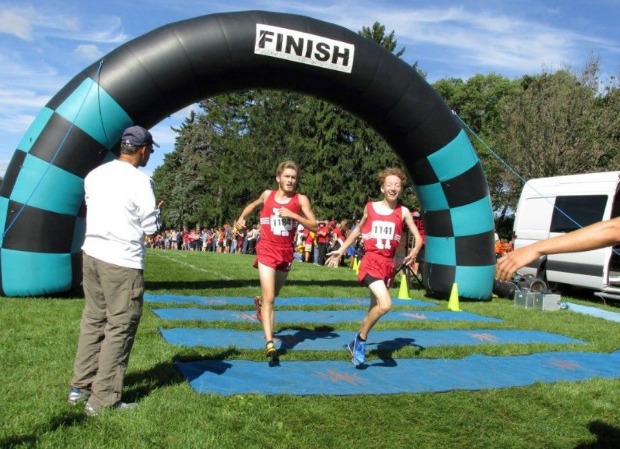 They say the hardest thing in sports to do is defending a championship. In Hinsdale Central Boys and Glen Ellyn Glenbard West’s Girls case, they are the respective 3A state championship team title holders. They both come into their season openers with ample artillery to stave off any would be hunters. Beautiful Katherine Legge Memorial Woods Park in Hinsdale provided just the right setting.

Hinsdale Central appeared fully strapped going into the race according to Assistant Head Coach Noah Lawrence; others such as Neuqua Valley did not have veterans Colin Weidman (Sr.) and Matt Wolff (Jr.) in the line-up due to illness and injury. New Trier was missing key senior runners Om Kanwar, Tarek Afifi, and Luke Duros. The question is: “did the missing parts make a difference in the outcome of the meet?” Perhaps it would have shifted a place or two around. But the fact that Hinsdale Central ran like a pack of hungry lions together from the start to the finish would not have deterred them. They also copped a 24-second scoring split to go with a 15:14 per man average. The Red Devils would have been incredibly hard to beat no matter what team was lined up against them.

As for the race itself, the massive opener got off to a clean start with most of the key teams jockeying for good starting position. As a group of about a dozen runners approached the first mile mark it was evident that the pace was much slower than last year’s 4:47 scorcher. In fact, the course appeared to be in the same shape in terms of conditions despite some rain drops heaped upon it on Friday. This year’s flock dropped a 5:03 dagger. It didn’t seem to mind Hinsdale Central and Neuqua Valley who had all their scoring numbers in the top 20 and looking strong.

The second mile began to stretch out as the pace quickened a bit.  Palatine senior Graham Brown took over ahead of Neuqua Valley junior Connor Horn who was running his first cross country race in nearly two years due to injury. Brown, who had his own personal running related dilemma this past spring, hit the second mile in 10:14 and some breathing room. Simultaneously it looked like a dead heat between the two titan teams. No other squads were even in the picture to claim first or second.

At the finish line a ton of fans were positioned to see a barn burning conclusion of the race. Brown cruised home for the easy winner in 14:55 followed by Highland Park senior Ben Casey who gritted his way to a 15:01 clocking in second place. Graham who was motivated by the fact that he had to sit in the stands on state finals track season and watch guys he knew he could beat. He certainly did that on a beautiful and sunny Saturday. The Red Devils then took the next three slots led by sophomore manchild Blake Evertsen, junior Chris Brenk, and senior Matt McBrien- 15:04, 15:07, 15:07. Neuqua Valley did some damage of their own by scooping the following three positions: Horn, sophomore Michael Widmann, and senior Daniel Weiss clocked 15:12, 15:13, 15:14. Niles North senior Dhruvel Patel and Wheaton-Warrenville South senior Kyle Cepeda put the finishing touches on the top 10 with 15:15 times. 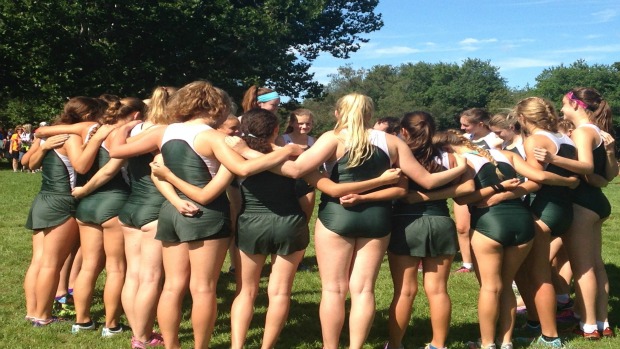 The girl’s portion of the meet was not as dramatic as the boys. Top ranked Glenbard West was as focused as any team just prior to the start of their race. The Lady Hilltoppers were not singing, chanting, or doing any team Rah Rah rituals. They simply gathered in a circle about 50 meters out from the starting line and took in their final race instructions from their head coach Paul Hass.

In just a few minutes the KLM drew a collective silence and then… POP! The starter’s pistol officially ushered the meet of the weekend. In just a few short minutes the girls were rolling and positioning themselves and settling into their packs. Glenbard West was well positioned as junior ace Lindsay Graham (not Mimi Smith of New Trier as reported through twitter) running side by side with sophomore Alexa Haff of Hinsdale Central. The pair worked the opening mile in 5:36. Glenbard West had three runners in the top six and six in the first 20. The scoring spread stretched out to 5:48 for the Hilltoppers. #6 Hinsdale Central looked formable as well with Anne Zaher (Jr.) leading the pack charge. After those two teams it was a mix of different runners from several squads.

Haff and Graham played volleyball with one another through the second mile. They traded off the lead here and there hitting the two-mile mark in 11:25. They were up big on the field but Glenbard West was looking healthy and from a naked eye they were winning very easy- all five scorers in the top 15.

It was once again déjà vu time with 600m to go as Haff was in a battle for the win. But this time was Graham a few steps behind her and not Smith. Graham unfortunately doesn’t possess the same raw leg speed as Smith. Haff opened the few meters lead into a 20 meter plus gap. She would ease home in a meet record 16:52. “Believe it or not Alexa was not feeling all that great going into this meet… no sophomore slump for her,” noted her coach Mark McCabe.

Glenbard West was feeling great at the start with Graham’s second place in 17:03. “I wanted to run around 17:20,” she said. The remaining scoring pack went as follow: Lindsey Payne (Fr.)- 3rd,  Lisa Luczak (Sr.)- 5th, Kathryn Kenwood (Jr.)- 11th, Janie Nabholz (So.)- 15th.  The Hilltoppers racked up 36 points on a deceptive 1:07 scoring split compared to a whopping 2:12 for second place Hinsdale Central who scored 68 points. Last year’s champ #5 Palatine finished a distant third with 103 points. #19 Minooka held off #7 Naperville Central for fourth tallying 124 points to the Hawks 125. The surprising sixth place finish by #3 New Trier had a few folks scratching their heads. The Lady Trevians had their scoring pack too far back from the key teams. But then again it could be by design. While this meet was fun to watch and spectate, it’s just the second weekend of the season.