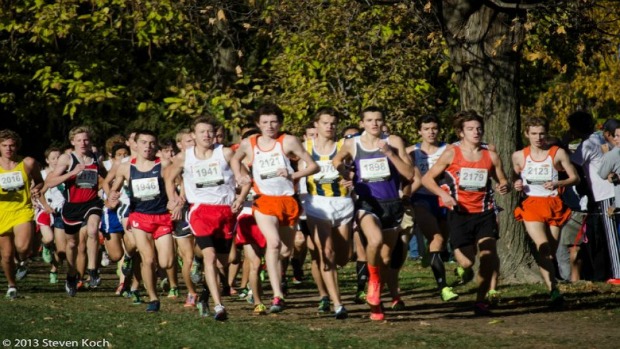 One of the most anticipated and respected individual years (nationally) in several years. This will be one time when the individuals will overshadow the teams. Jesse Reiser and Zach Dale are among the top returning distance runners in the state. With just 8 of the top 25 runners coming back is a big underrated fact. Many of the returners and some not listed had very good track seasons.

1. Jesse Reiser (Sr., McHenry) -2nd; Reiser has proven to be the state’s top distance runner albeit a slight margin over Zach Dale because of head to head battles and personal bests. With that being said, he knows that the price of being the harrier crown will be incredibly hard earned. The subtle mannered Reiser is anything but that in competition. His personal bests of 14:22/8:54.31/4:09.5 are the catalysts of making such statements. The key this season for Reiser will be how he handles the pressure of being the hunted. Can Reiser win his first state cross country title when the cascade of expections begin to build up? How about when he moves on to the national spotlight? He competed in the NXN and Footlocker Nationals. All of the questions will be answed this fall.

3. Ryan Clevenger (Sr., Downers Grove North)- 7th; the lone member of "the boss crew" is back and ready to tear up the scene. Don't think for a minute that Clevenger is content with his name being constantly being mentioned third on the elite list. He proved better than former teammate and apprentice Zack Smith during the past spring track season. The same thought process will go into this seaon. Let's not forget the 14:45 that Ryan put up in July at the Detweiller at Dark meet on pure summer mileage training. The capability of dipping into the 14-teens is very real. So is giving Reiser and Dale some serious competition.

4. Matt Pereira (So., Lake Zurich)- 69th; it started with a simmer and ended like a tidal wave for then freshman Pereira who became one of the state's top distance runners regardless of age. The above average 9:12.66/4:15.36 (mile) should go a long way in dropping Pereira's three-mile personal best of 15:25.

5. Kevin Salvano (Jr., Buffalo Grove)- 20th; Salvano took over as the team's top runner when his older brother Steven Salvano went down with illness/injury early last season. Kevin never gave back the mantles to big bro. Now this year's squad is his team and the Bison have a real good bunch. Kevin will keep his blades sharpened all season with the top notch competition that he will see in the MSL.

6. Graham Brown (Sr., Palatine)- 8th; an illness and injury marred track season knocked out any talk of Brown being among the state’s immortals. But he is now at full strength and will be ready to go… moving up the all-time Pirate charts will be a goal for Brown to shoot for. The last state harrier champion for Palatine was Steve Finley back in 2005. You do remember when he leaned at the finish line to be beat the early celebrating Ryan Craven of Prospect don't you? Well Brown is certainly in Finley's and Craven's class.

7. Joseph Suarez (Sr., Plainfield East)- 52nd; an awful 2013 xc state championship race should not count as a strike on Suarez’s race- especially since his overall body of work was Grade A quality. Suarez rebounded in track and ran 9:12 for 3200m at sectionals to turn around then drop a 9:45 at state. Is it "pipe busting pressure" that is preventing Joseph from fulfilling his super talent? Hopefully, he will get it done this fall on championship day.

8. Dorrian Gordon (Sr., O’Fallon)- 11th; an above average cross country runner under the shadows of predecessors Alex Riba and Patrick Perrier is ready to be the Panthers third straight big time harrier. Nevermind Gordon’s obsession with running the middle-distance events in track… he is a LONG DISTANCE RUNNER. Oh by the way, Gordon ran 15:00 on the Detweiller course in July at the Detweiller at Dark race.

9. Matt Plowman (Sr., Elmhurst York)- 38th; this young man probably should be rated higher based on the excellent track season that he produced which included an all-state honor in the 800m and mile time of 4:09.xx. But the fact that he has never produced any eye popping marks in the longer distances will keep him at bay in the meantime.

10. Kyle Cepeda (Sr., Wheaton-Warrenville South)- 33rd; after being a part of the state’s top trio with Nolan McKenna and Luke Schroer, Cepeda will have the green light to go for top honors in the season’s upcoming big invitationals and post-season.

The best of the rest (no particular order):

David Rodriguez (Sr., Arlington Heights Hersey)- one of the MSL's top runners over the past few seasons is back.

Daniel Santino (Jr., Chicago St. Ignatius)- it's been a solid two seasons thus far for Santino. He is entering the same timeline of predecessor Jack Keelan. Will we see the same growth as Keelan?

Christian Swenson (Sr., Wilmette Loyola Academy)- 28th last year and 9:23 on the track should prove fruitful for Christian this fall.

Brydon Groves-Scott (Sr., Edwardsville)- the 23rd place last year was not a fluke. Groves-Scott also made it to the promise land in state track.

Connor Horn (Jr., Naperville Neuqua Valley)- the injury bug struck down a highly anticipated sophomore season in xc. But Horn returned in track and ran 4:18.90 and had a big helping hand in his team's state 4x8 championship that rocked 7:40.21. Horn is back and fully healthy and should be running with the best of them this fall.

Keagan Smith (Jr., Huntley)- out of no where this kid dropped 9:25 on the track. It seemed like a surprise to many out there who forgot this placed 16th in state xc.

Pavlo Hutsalyuk (Sr., Chicago Lane Tech)- one if not the state’s unproven talents will have an opportunity to be a little more selfish this fall. Pavlo has a nice blend of speed and endurance but he spent a good amount of time running relays in track. He ran the 3200m once (all Lane runners are required to contest the event at least once) and popped 9:29 in mid-April.

Blake Evertson (So., Hinsdale Central)- one of the most talked about incoming freshman since Hersey’s Kevin Havel. He delivered with a 15:00 personal best. He also finished 29th in the state.

Henry Mierzwa (Sr., Park Ridge Maine South)- this young man developed and emerged from under teammate Jack Carpenter last fall. Mierzwa was able to take another step forward during the spring running 4:19.25 and competing in the state meet.