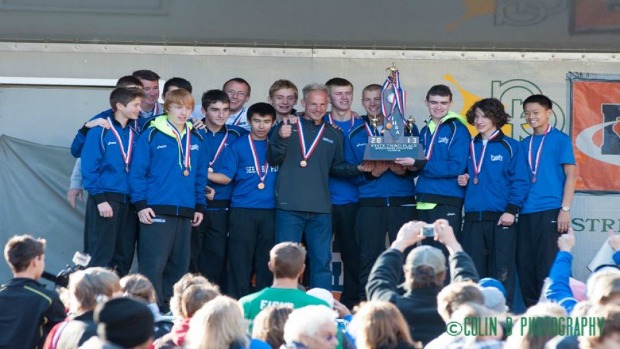 Opening Remarks: Today we take a cross examination of the top ten boys teams as we anticipate yet another intense battle between many strong teams that you’ve definitely seen before from last year’s slugfest party! The clear favorite is no surprise: Elmwood *cough* *cough*. But whatever team those other trophies end up going to, it will be a surprise, because the top 2-7 look to be very evenly matched for the most part. Really any team in the top 10 could be in the hunt for a trophy if you added them one x-factor, other things equal. But based solely on returning runners, incoming recruits, and some major guesswork on how state scoring influences things, here is where the teams stand.

1. Elmwood-Brimfield
2013 final placement: 1st place 1A state finals
Possible Roster: Nate Herridge (Sr.) 15:40, Matt Osmulski (Jr.) 15:44, Kelly Hoffmann (Sr.) 16:13, Derek McCoy (So.) 16:16, John Barratt (So.) 16:23, Matt Henry (So.) 16:54, Cooper Husemann (Fr.), Cooper Hoffmann (Fr.), Alex Herrmann (Fr.).
Snap Analysis: On paper it’s no contest. The Trojan empire is looking to defend their title with a seemingly impenetrable wall of returning runners and incoming freshmen. Even harder than ranking these teams is trying to rank this team’s varsity seven in the correct future order. They have six returners coming back from last year’s champion team...plus...incoming freshmen coming from Brimfield junior high’s third place 1A team...AND...Elmwood junior high’s first place 1A team! This possible roster list does not even do justice to who may crop up on their varsity! Coach Gregg Myers is going to have to spend the majority of the season figuring that one out! They won’t even have seven confirmed varsity runners with laces tied up in their spikes until the end of the season! I may have embarrassed myself with how I ranked them last year, but I know the drill this time! I will set forth a commandment for myself with how to deal with ranking the Trojans each week of the season: Thou shalt not ranketh Elmwood lower than first, under any circumstances, unless thither a threat befalls when the sun striketh upon week 8 of rankings! Tis done!

2. Tolono (Unity)
2013 final placement: 5th place 1A state finals
Possible Roster: Andrew Warnes (Jr.) 15:41, Austin Woodard (Jr.) 16:03, Dawson Dodds (Jr.) 16:11, Robert Decker (Jr.) 16:22, Luke Woods (Fr.)
Snap Analysis: The Unity Rockets have only four returning, which could pose a problem. It will be an extreme concern for coach Dike Stirret to find the fifth man...NOT!!! Anyone who’s aware of their JV and junior high situation knows that they’ve got at least one rabbit to pull out of the hat finding the fifth man. They have the best quartet out of any team mentioned thus far. And as for Elmwood? Nothing in the rules says that Tolono cannot upset Elmwood...in a similar sort of way that Elmwood last year upset all the other team favorites? Stay tuned for great things this team has in store.

3. Monticello
2013 final placement: 3rd place 1A state finals
Possible Roster: Matt Norvell (Sr.) 15:38, Zach Mesplay (Jr.) 16:14, Justin Furcich (Sr.) 16:21, Will Montgomery (Sr.) 16:26, Alex Helmuth (Fr.), Eric Tate (Fr.)
Snap Analysis: The Sages return four of their top seven, but they are not going ANYTIME soon! In fact, another trophy is a very realistic scenario. They return Norvell for front runner points, with their 2-4 all looking to stay within 40 second proximity. And then you have Helmuth who’s looking to be their fifth man call from out of the sky. Monticello has been looking for a first place trophy for years, and this year isn’t looking any less different.

4. Rockford (Christian)
2013 final placement: 13th place 1A state finals
Possible Roster: Nick Monkemeyer (Jr.) 15:22, Noah Wells (So.) 16:30, Ethan Volk (Jr.) 16:32, Alex Wilfong (Sr.) 16:45, Brian Smith (Jr.) 17:00, Steven Reierson (Sr.) 17:09, David Mecklenburg (Sr.) 17:16, Josiah Vogel (Fr.), Matthew Ramlow (Fr.)
Snap Analysis: Now here we have a team returning with piles and piles of depth, so it would be a disgrace not to rank Rockford anywhere above fourth. Not only do they have their entire varsity returning, but they look to get both Vogel and Ramlow who look to be strong freshmen. It’s a shame that one can only run seven of their best runners...and only score their best five. What the Royal Lions absolutely need for a trophy is the pack staying in touch with Nick Monkemeyer as much as they can. If they can get at least two men within 40 seconds behind Nick, Rockford will be a threat!

5. Shelbyville
2013 final placement: 4th place 1A state finals
Possible Roster: Marcus Skinner (Jr.) 16:00, Kenton Wilson (Sr.) 16:10, Tyler Pasley (So.) 16:46, Hunter Plummer (So.) 17:07, Preston Henze (Jr.) 17:21, Ryan Skowronski
(Fr.)
Snap Analysis: The rams have the ability to rebuild their success from not too much returning. This was an established fact last year when they finished fourth place after only keeping two of their varsity the year before. This year, they return five but lose both Drennian Martin and Jaden Stockdale who were key players to their solid finish. They can definitely compensate for one of those losses with incoming freshman Ryan Skowronski who ran 10:58 at IESA 2A, and with their reputation for rebounding, the x factor fifth man should not be too difficult.

6. Rochester
2013 final placement: 9th place 1A state finals
Possible Roster: Michael Gleason (Sr.) 15:33, John Freveletti (Sr.) 16:13, Noah Edwards (Jr.) 16:14, Colin Biesiada (Sr.) 16:35, Austin Mitchell (Jr.) 18:04, Josh Cable (Fr.), Seth Walters (Fr.),
Snap Analysis: The Rockets return their top four plus their seventh. One may wonder where they will find the fifth man, and that’s when you notice Cable and Walters who ran 10:44 and 11:17 in IESA 2A respectively. Do not underestimate them just because they finished ninth last year. Sometimes in a competitive year, the scoring process did not work out in their favor despite having very similar levels of talent. If both their training and karma works in their favor, then Rochester could very conceivably trophy.

7. St. Joseph (Ogden)
2013 final placement: 8th place 1A state finals
Possible Roster: Nick Poff (Sr.) 16:00, Austin Earp (Jr.) 16:11, Matthew Knipfer (Jr.) 16:44, Ross Smetzer (Jr.) 17:00, Nate Phillips (Jr.) 17:09, Brennan Guido (Jr.)
Snap Analysis: The Spartans are back...officially! No tough sectional strings attached! The Spartans went to Detweiller for the first time since 2009, placed 8th in the heat of competition, and only look to improve in their campaign even more this season. They may lose their typical front man Braydon Crozier and their fourth runner asset Corey Thompsen. But they keep the rest of their varsity that is at or below 17 minutes besides that. And to make their low scoring duo a trio, they have Bennan Guido who after not quite making the cut on varsity last year, really made some summer strides forward running 15:57 at Detweiller at dark. A trophy for them definitely seems within grasp.

8. Winnebago
2013 final placement: 2nd place 1A state finals
Possible Roster: Nathan Ambrose (Sr.) 15:43, Nathan Smith (Sr.) 16:01, Christian Devant (Sr.) 16:23, Noah Watson (Jr.) 17:12
Snap Analysis: What a season! A pack of five Indians who consistently stayed 40 seconds or less between each other, many anticipated them to be a trophy team from the beginning. And it turns out they were right! This year, however, will be a bit of a rebounding year, but not as much as one might think because they retain a fair amount of their front runner presence. Although they do lose a significant amount of depth in the back that has made their pack so strong, and will need to rely on JV depth to close gaps if they hope for another trophy.

9. Mt. Zion
2013 final placement: 8th place Decatur sectional
Possible Roster: Curtis Reed (Sr.), Mohammad Hosseini (Sr.), Aiden Gerhardt (Sr.), Jacob Moss (Jr.), Nick Lewis (So.), Tyler Wilhelm (So.), Andy Hinch (Fr.)
Snap Analysis: Mt. Zion had a rough year rebounding from the loss of front runner Jake Brown. It still seemed like the Braves could pull off a high finish and make it out their notorious sectional with still the Reed/Hosseini duo in the front plus other key players. However, two things stopped them: A heap of teams setting the bar unexpectedly high with their packs (Uni, Shelbyville, etc.), and then setbacks involving their vital third man Wilhelm unable to run. Throw in a bunch of other powerhouse teams and you’ve got yourself a potential top 10 team who didn’t make it alive in the sectional of death. This year, they return six of their seven and look to add Hinch to the party, so Mt. Zion will look to show themselves that they belong in the park in November!

10. Pleasant Plains
2013 final placement: 7th place 1A state finals
Possible Roster: Tyler Johnson (Jr.) 15:55, David Plunkett (Jr.) 16:39, Connor Riddle (Sr.) 16:51, Seth Owens (Sr.) 16:56, Adam Ely (Sr.) 18:02
Snap Analysis: The Elmwood sectional champions will be back, and have enough returning that they are capable of making a crack into the top ten. The main concern for the Cardinals this year is finding the fifth man. If they do that, they could surprise a whole lot of Illinois running fans.