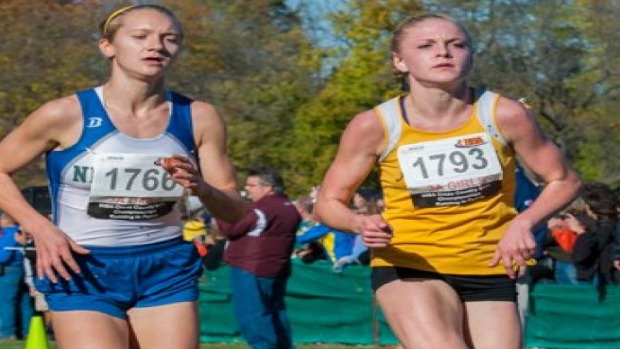 Despite 9 out of 10 and then 21 out of 25 runners coming back for a brand new season, it is like playing a game of Russian roulette. In other words, it is incredibly hard to predict what is going to happen with the flock of runners. You see girls have a different maturing process than the boys. Last year 11 freshmen and sophomore girls earned all-state honors as opposed to two on the boys side (no freshman)… the moral to a long story is while there are a bevy of top returning talent, it is NOT a guarantee that such talent is going to paint the picture status quo.

1. Meredith “Mimi” Smith (Sr., Winnetka New Trier)- 1st; 16:43/10:41.17/5:00.01- Ms. Smith, the one-time pre-high school phenom, has lived up to expectations and more with all-state accolades each track and cross country season. Smith is the defending state harrier champion with perhaps less obstacles to climb than before. Keep in mind that her lowest meet finish in state side competition is 12th place (over 20 contests)- a mountain of statistical facts which shows her tremendous consistency. In addition to repeating as a state champion, Mimi will attempt to earn All-American honors in either Nike Cross Nationals or Footlocker… or both. She placed 33rd at NXN last year and should be a heavy contender to medal this time around.

2. Lauren Van Vlierbergen (Sr., Algonquin Jacobs)- 4th; 17:07/10:544:55.50/2:10.14- the state’s most complete distance runner who now is realizing her true potential. The state’s 800m champion has bucked the notion that a true middle-distance runner can’t compete in cross country at the highest level. Van Vlierbergen can most certainly compete with the best girls in the state. In fact, her all-time three-mile best of 16:47 charted 7th in the state back in 2012. If there is anyone who can top Mimi Smith or any other title thieves it is LVV. Be sure to mark your calendar for Saturday September 13. That is the day in which LVV will duel Smith at the First of The Finish Invitational in Peoria. It should be one for the ages.

3. Alexa Haff (So., Hinsdale Central)- 2nd; 16:45/10:50- Haff took the cross country scene by storm in winning her debut at the Hinsdale Invitational last year. She nearly completed an unblemished season with just two losses. It will be interesting to see if Haff can duplicate matters in her sophomore campaign with all eyes on her. She had a good summer of training according to the Red Devil coaching staff. Hopefully that means no sophomore blues for one of the sport’s bright young stars.

4. Lindsay Graham (Jr., Glen Ellyn Glenbard West)- 17th; 17:25/10:36.83/5:03.30- through ups and downs of a turbulent 2013-14 school season Graham was able to rise above several injury setbacks. If she can remain healthy this fall, the cross country faithful is going to be for a treat. Lindsay can run with the best girls in the state on any given day as evidenced by her 3A leading 3200m time last spring. She will also have team championship implications and that may affect how she races at times this season.

5. Elly DeTurris (Sr., Naperville North)- 10th; 17:16/10:54.53/5:09.86- one of the most consistent distance runners in the state, Elly has maintained or improved every year of high school. This season could be even better for DeTurris. The Lady Huskies have a deep team and that usually brings out the best in an athlete.

6. Gabby Juarez (Sr., Streamwood)- 49th; 18:03/10:53.45/5:02.94- what a difference a year makes… some athletes excel as they mature and a majority of female distance runners usually go downward after their freshman seasons. However, this is not the case for Juarez who improved more than any girl of her stature in Illinois. She personal in the three-mile prior to last year was 19:10. She quietly earned all-state honors in the 3200m and 1600m this past spring. Juarez will have an opportunity to strut her stuff on the superfast Lake Park HS speedway in early September.

9. Morgan Bollinger (So., Lockport)- 8th; 17:14/5:11.67- A great cross country season didn’t produce the exact same dividends on the track, but this is a new year. Bollinger just may that one athlete who is better at cross country. Regardless of the reasoning she is no longer a hidden gem.

10. Lisa Luczak (Sr., Glen Ellyn Glenbard West)- 9th; 17:14/11:07.64i/5:13- a lot of doubters out there have been licking their chops regarding this young lady. She didn’t follow up a break cross country season on the track. But Lisa was slowed by injuries. If she is healthy she will be back in attack formation this fall.

The rest of the flock (in no particular order):

Mary Blankemeier (So., Oak Park-River Forest)- 5th; the freshman year prodigy will start the season on the shelf for several weeks nursing a stress fracture. Blankemeier will hopefully back among the state's elite come November.

Kelly O’Brien (Jr., Palatine)- 6th; she probably deserves to be among the elite top 10 but O’Brien will play whatever role that her coach Joe Parks has for her. During the track season she concentrated on the 4x8 relay and the mile.

Ellie O’connell (So., Schaumburg)- 13th; one of the big surprises in the mighty MSL is back to prove that she is no fluke.

Anne Zaher (Jr., Hinsdale Central)- 42nd; state mile champion will go into this season with more confidence than ever before. She also sports a solid 11:16 3200m on her resume.

Maryclare Leonard (So., Chicago Marist)- 20th; Leonard surprising didn't contest the 2-mile during the track season. But she still put up a state standard sizzler 1600m in 5:01.87.

Katie Hoffman (Sr., Naperville Central)- 12th; one of the trio Hoffman triplets ready to lay a hurting on the competition one final time this fall.

Kaitlyn Ko (Jr., Buffalo Grove)- 7th; after missing the entire track season with health issues, Ko is ready to reboot and be among the elites.

Rachael Lau (Jr., Plainfield North)- 24th; a front running Lau will continue to make those ahead of her on the depth chart earn their keep.

Ayako Higuchi (Sr., Palatine Fremd)- DNC; Higuchi is the only runner listed who did not compete in last year's state xc meet. She enjoyed a great track season anchoring her squad's 4x8 and earning individual honors in the 1600m.

Abby Kargol (Sr., Downers Grove South)- 93rd; Kargol's state race last year was a fluke. She was able to rebound and run lights out in the 3200m and earn all-state honors.