The image above is from the 2013 state championship. Every team hopefully trained well and hard over the summer for a return scenario in November

From a team perspective, 2014 is looking like a year of excellent top runners. Many teams have two or three runners who can run in the 19-minute range or below. However, in order to make it or break it for a majority of these teams is either finding a solid fifth runner, or getting their fifth runner from last year down.

Ranked in the top #20-#11 range are mostly two kinds of teams: 1) the first are teams that we have not seen at state last year; 2) those who are looking to step up from the bottom of emerging pile. Some of those teams include Macomb, Liberty, Litchfield, and Effingham (St. Anthony) which were in last year's Decatur or Elmwood Sectional- the two toughest sectionals last year. Once again they have a very legitimate chance at qualifying for state. Other teams ranked are very familiar schools who have seen Detweiller before; and with the amount of returners they have (such as with Herrin and Freeburg), as well as a reputation for being a program that rebounds well (such as Monticello), chances look very high to see these teams again.
20. Kankakee (McNamara)
2013 final placement: 20th place 1A state final
Possibe Roster: Cassidy Degenouges (Jr.) 19:26, Jenna Devenouges (So.) 19:55, Elizabeth Stam (Jr.) 20:09, Samantha Gonski (Jr.) 21:24, Hannah Lambert (Jr.) 22:29, Madison Gonski (So.) 23:14.
Snap analysis: With six of their varsity seven returning, Kankakee is again looking like a strong team this year. In order for the Fightin' Irish to place better, they will obviously have to tighten gaps.
19. Macomb
2013 final placemet: 6th place Elmwood Sectional
Possible Roster: Brianna Drew (Jr.), Karla Mendoza (Sr.), Ashley Plumb (Sr.), Lydia Fetene (Jr.), Aki Fujiwara (Jr.).
Snap analysis: This Bombers squad ran real strong at the tough Elmwood sectional last fall, but they just missed qualifying for state by two points behind host team Elmwood. Unfortunately they lose all-state standout Karyn Paisley, but nevertheless return five runners from their sectional roster, including three who ran under 20 minutes at that sectional. There will be some gaps that this team will have to work out, but could very well end up on the road to Detweiller if their season pans out right.
18. Liberty
2013 final placement: 10th place Elmwood Sectional
Possible Roster: Katelyn Obert (So.), Jacki Graham (Jr.), Katie Cook (Jr.), Megan Barry (So.).
Snap analysis: Last year, the Eagles seemed to be doing pretty well this season, but with Cook out due to injury, they ended up having to run sectionals one varsity runner short, which is tough for these small teams to do well. Now with everyone in their typical top five back, they have a very good shot at qualifying state.
17. Ottawa (Marquette)
2013 final placement: 13th place 1A state finals
Possible Roster: Paige Aurit (Jr.) 19:08, Maria Ivanova (Sr.) 20:01, Olivia Rhoades (Sr.) 20:32, McKenzie Mattes (Jr.) 20:40, Katelyn Johnson (Jr.) 28:23
Snap analysis: Ottawa always seem to be very reliable when it comes to building up a team and performing well at the right time for state. This year, the Lady Crusaders return five out of seven of their roster so definitely expect them at state November, provided that they find a fifth man not too far behind their top four.
16. Herrin
2013 final placement: 22nd place 1A state finals
Possible Roster: Kara Martin (Jr.) 18:31, Maura Farrell (Jr.) 18:31, Brooklyn Schlappi (So.) 21:28, Lexis Wieland (Jr.) 22:58, Erin Lukens (Sr.) 23:26, Alexis Dickerson (Sr.) 23:28, Tori Mattingly (Sr.) 26:53
Snap analysis: Hopes are really looking high for Herrin as they return two potential all-staters. The only fallacy that causes the Tigers to not be ranked higher is how far back all the other runners are, which caused Herrin to finish far behind last year. But with their whole varsity roster back, it is certainly very possible that more runners step up than we anticipate, causing this team to finish even higher.
15. Litchfield
2013 final placement: 7th place Decatur Sectional
Possible Roster: Alexandria Quarton (Jr.), Alexis Throne (So.), Breanna Travis (So.), Brittany Uehling (Jr.), Robin Randle (Jr.), Hannah Nail (Sr.)
Snap analysis: Out of last year's varsity seven, the Lady Panthers return a very solid group of five. Alas, their fifth is a little far back and will have to step up if the sectional dice are not in their favor (as with last year). But whether they make Detweiller or not, expect this team to race like a top 20 team again this season.
14. Monticello
2013 final placement: 9th place 1A state finals
Possible Roster: Maggie Utgaard (Sr.) 19:28, Madison Tutich (Jr.) 20:02, Audrey Duncan (Sr.) 21:03, Meggie Schroeder (So.) 22:45, Abbie Steffes (Jr.) 23:10
Snap analysis: The Sages had a very unfortunate ending to last year's dream team. A win over St. Theresa at Woodruff was a rare early season moment to remember and cherish forever. But then a plague of injuries and setbacks untimely put a damper on their performance, and they could not replicate their win over St. Theresa for the rest of the season. On the bright side, Monticello looks into their next season with five of last year’s state varsity roster returning, and could very well rebound nicely for another trip to Detweiller.
13. Elmwood
2013 final placement: 15th place 1A state finals
Possible Roster: Kendra Gorham (Sr.) 19:43, Cassie Karn (So.) 19:49, Sara Rosecrans (Jr.) 20:15, Hannelore Book (Sr.) 20:31, Allie Meyers (So.) 21:15
Snap analysis: Elmwood returns five legitimate veterans from Detweiller. This team was holding its own against last year's dark horse Eureka but then the Hornets cranked out an extra gear at state that these Lady Trojans did not have, even when they are known to taper for the biggest meet of the year. While losing some front runners may keep them out of a top ten finish, this is a team that runs well as a pack and will very likely have the necessary athletes step up so they can continue the Elmwood tradition. 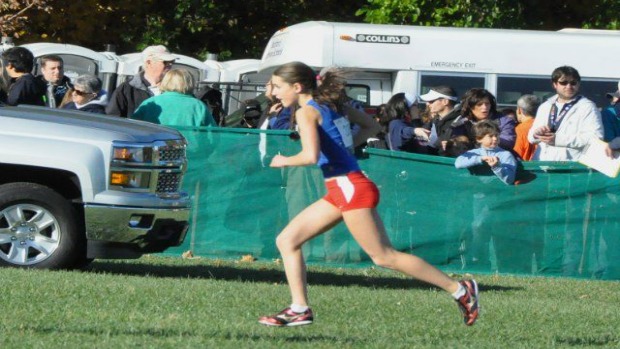