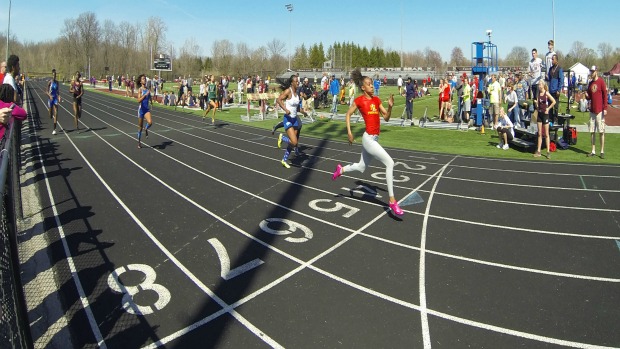 
It was on the eve of Easter at the Midwest Prep Invitational at Lawrence Central High School in Indianapolis, Indiana that a very monumental track and field meet took place.

For Illinois athletes, this occasion was used as a platform to strut some of their best talent in a central but foreign land. For the host Hoosiers, the same platform was used to demonstrate how outstanding the talent level is in the state.  Both in state gender teams took home the team titles including girls host and defending state champion Lawrence Central. The Lady Bears used a balanced attack in the field and on the track to amass 65.5 points to hold off Columbus North, IN and Evanston 64.

Coming into super hyped up meet was the question: “who is the best sprinter in Illinois now that Aaliyah Brown of Lincoln-Way East has graduated?” During the indoor pre-season North Lawndale Prep senior Briyahna Desrosiers answered that question quickly with a then US#1 400m time of 55.04 as well as a blazing 24.70 at the University of Arkansas Invitational.

There were a few others in contention to take hold of the crown such as Parker English (Sr., Evanston), Meghan Marias (Sr., Lincoln-Way East), Alexis Hyshaw (Sr., Lincoln-Way East), and Britney Ellis (Jr., Gurnee Warren). For the sake of argument, let’s throw in Indianapolis Pike freshman Lynna Irby for Illiana considerations. Out of all the names presented here there was one outstanding sprinter that wasn’t mentioned. She is Ebony McClendon of Brooks College Prep. McClendon, a senior, has thoroughly enjoyed her outstanding season up to this point. She took over the state “sprint queen” crown after a great Illinois Top Times performance that netted two top national rankings in the 60m and 200m.

The showdown in “Naptown” would go a long way in resting the case as to who will be the new sprint queen crown this spring.

The prelims of the 100m and 200m went according to plan as McClendon, Desrosiers, English, Kiawana Cottrell (Sr., Pendleton Heights IN), and Brittney Thomas (Sr., Chicago Heights Bloom) all advanced to the respective finals.

The Century dash was the event that had everyone anticipating. McClendon breezed in her prelim with a season opening best 11.95. Desrosiers followed suit in her prelim with a big personal best 12.00.  The final would be anti-climatic as McClendon pulled away 50m in and won very easily in a meet record time11.81. Desrosiers placed second in 12.03 and Thomas completed the Illinois sweep in 12.41. “It didn’t feel like it was that fast coming out of the blocks, but I did feel good,” said McClendon of her statement making win.

The 200m was the next match up between the heavyweights. Once again the Illinois faithful witnessed McClendon lead all qualifiers in an IL#1 time of 24.36. Desrosiers, English, Thomas, Cottrell, and Thomas were the notables that easily advanced to the final.

In the finale, McClendon was the first to break into the lead off the curve into the lead where she was joined by Eng. Both speedsters headed up the straight 1-2 with Desrosiers a shade behind. McClendon did not get the expected separation as many had predicted she would with less than 50m to go. English was the first to fade but McClendon failed to accelerate away to victory. Desrosiers seized the opportunity and pounced on Parker and then McClendon by quickly dashing past both of them to an amazing victory in 24.12. The time would be an Illinois best regardless of conditions. The time probably would have been wind-legal had meet officials instituted wind gauge readings. There was no wind at the beginning nor was it present at the end of the race. These great times mean some serious business for Illinois competitors back home. The Prairie state sprinters swept the first four spots after Desrosiers with McClendon 24.50, Parker 24.65, and Thomas 25.02. For Desrosiers, she appeared stunned after walking off the track following her impressive victory. McClendon on the other hand was hobbling and needed assistance to be removed from the track. She apparently suffered a cramp in her leg that had been bothering earlier in the meet.

In between the races, there was stunning action that brought the sprint queen battle to a draw.  Evanston was on their way to a very easy victory in the 4x100m relay until McClendon took the baton on the anchor leg. Her Brooks mates were trailing big and in third place well off the lead pace. McClendon bolted down the track like “she had a warrant for her arrest” as one track fan in the stands blurted out. Indeed McClendon took flight like her freedom was on the line. She swallowed up the Evanston margin to almost nothing but unfortunately the Eagles ran out of real estate. Evanston prevailed 48.46-48.54. The host Lawrence Central placed a distant third in 49.04

Desrosiers faced the same stressful deficit that McClendon encountered. Desrosiers was the second leg on the 4x400m relay. She took the stick in last place when North Lawndale’s lead leg ran a lagging1:07.  Desrosiers did not panic but instead made a steady push to catch one runner at a time. Briyahna took #2, then #3, #4, and finally was within an arms length of the leader Bloom Township at the exchange. Briyahna’s split was a sizzling 53.6. Evanston would go on to capture the race on the strength of Parker’s closing 57.0 leg (4:01.27) and Bloom second (4:01.67). N. Lawndale closed out third in 4:04.46.

Closing arguments from the girls- 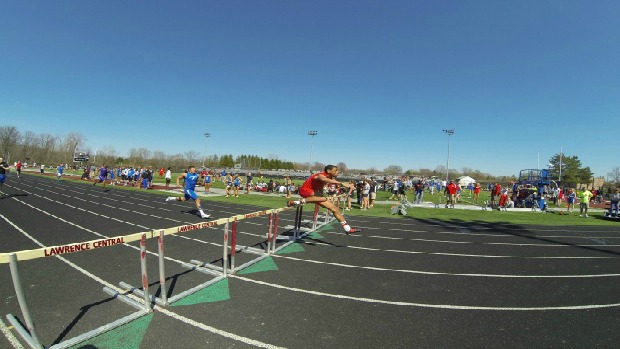 Boys wealth spread all over the track-