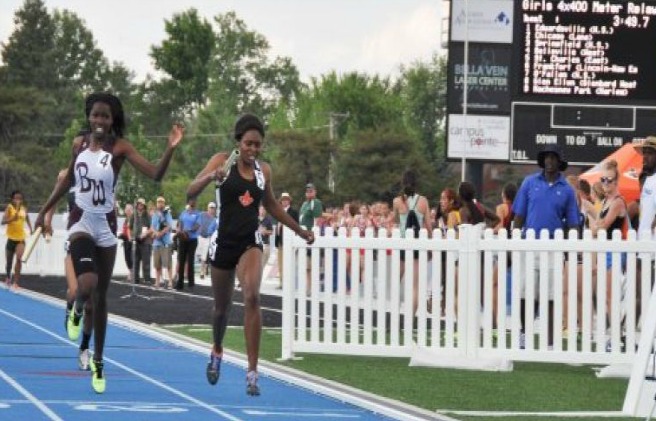 When it comes to big league relays things can be fierce. Over the past several years Illinois has made a name among the national conscious. For example, in 2012, Wheaton-Warrenville South and Glen Ellyn (Glenbard West) proved that a friendly rival can produce dividends for all. It produced a state record and national spotlight for the land of Lincoln in the 4x800m relay.

Relays can also be used as a prop for coaches to lull their competition in for other causes. For years, teams like E. St. Louis, Chicago Morgan Park, and Evanston would use relays in their quest to win a state championship. Sometimes the tactics worked and sometimes it didn’t. The 800m medley was an event that smart coaches with deep pockets would use as a throw away event. To them it didn’t make sense to run their best athletes in an event that would tax them too much later. Evanston coach Fenton Gunter has always felt that using a top 400 runner on a medley would kill that athlete’s ability to perform up to standard in other events later.

For a team battling for a team trophy, quick decisions have to be made. Remember that relays only count for 10 points in Illinois- not 20 as they do in Texas. But then again that same runner could also be used to bait other teams in thinking they will be spent on a relay when it isn’t true. But remember that every quality sprinter must be able to run the 4×400 relay. 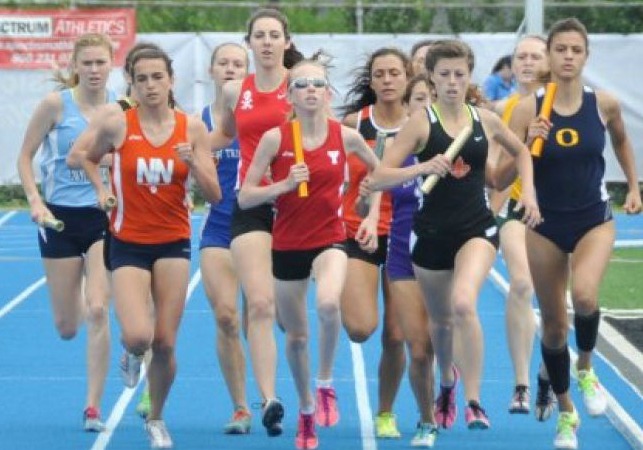 4x800m-
2013 State Champion: Winnetka New Trier 9:04.86
Key returning teams: Palatine, Downers Grove North, Minooka, St. Charles East, O’Fallon, Naperville North, Wilmette (Loyola Academy), Chicago Lane Tech.
Outlook: If your team wasn’t called in the returning category, don’t take it personal. It was more of saying that the teams that were designated as key returners are the teams to beat.  Of course, the defending champion New Trier could field a solid squad despite losing the Ackerman twins (Courtney and Jessica).  But it’s highly unlikely the Trevians would waste Mimi Smith with a new cast in the prime time post-season.  Yorkville could reload again but that will defend on the health of Skyler Bollinger. She faded badly during the second half of the cross country season. Will she be a relay runner or an individual who has run some blazing 3200m and 1600m times? And of course there is Prospect.  This program has been in the state final it seems every year.  Coach Dave Wurster is retiring after this season and you can bet he will have a quartet ready for late May.  So it is quite possible that yours truly may be wrong along the journey.

Now there is no team more popular or deep in this event than Palatine.  The Lady Pirates experienced a so-called retooling (not rebuilding) year in 2013.  They ended up finishing second in the state with a fine time of 9:12.21.  This upcoming season could be one of the best ever for head coach Joe Parks.  He elaborated quite well during the onset of the new season on his middle-distance unit: “Our 4x8 could be really good with Liz Cox (Sr.), Cassidy McPherson (Sr.), and Kara Burton (Jr.) all back from last year’s [state] runner-up squad with a less than 100% Tess Wasowicz.  Burton should be stronger than last year, as her past XC season was her best season since she’s been at PHS and she much prefers the faster stuff on the track.  Add in a Kelly O’Brien (So.), who ran low 2:20 last year as a frosh, while still being very raw.  Plus we’re toying with bringing up a couple long sprinters in the mix for the relay.  We’ll see… obviously the decision to run our best relay line-up depends a lot on what we ultimately decide to do in the individual events.”

Downers Grove North could be the team with the biggest threat to Palatine with three legs returning.  The Trojans lost Gabrielle Hesslau to graduation, but they have some depth to fill out several more spots. Stephanie Urbancik (Sr.) is a good individual runner who anchored the sixth place state scoring team.  Coach Tim McDonald could look to Kaitlyn Bonfield (Jr.) to fill the void… Minooka was an emerging force during last year’s indoor season that maintained the momentum they built into a state medalist squad. Top runner Moira McAsey (Sr.) is back. St. Charles East is also back with all four starters. The Saints have the depth to run a sick time if they really wanted to stack this relay (such as New Balance Nationals).  Torree Scull (Jr.) will probably be moved to anchor leg this season if she is not put in an overload situation. If long sprint star Jordan Shead is put on the relay, then all bets are off.

4x100m-
2013 State Champion: Frankfort (Lincoln-Way East) 46.48
Key returning teams: Lincoln-Way East, Homewood-Flossmoor, O’Fallon, Evanston, Naperville Central, Highland Park, St. Charles East, E. St. Louis Sr., Chicago North Lawndale Prep.
Outlook: Lincoln-Way East romped their way to stardom in a record setting way (46.10) at the prestigious Penn Relays. But the buildup happened in March in at the Texas Relays when the Griffins put down a Lone Star state whipping on the host Texans.  Lincoln-Way East returns a strong unit coupled with depth but lose the ultra-talented and legend Aaliyah Brown to Texas A&M.  Look for senior Meghan Marias to do her best impression of Aaliyah in the replacement role. Coach Angelo Brown is very confident that a collective approach will be the way to handle this event.  So the championship squad could be Marias, Alexis Pierre-Antoine (So.), Asia Brown (So.), and Alexis Hyshaw (Sr.). In the books of many relay fans, this is still a deadly foursome… Homewood-Flossmoor lost its ace Shayna Nwokenkwo to Depaul University but they will be a team to be reckoned with as three legs return in juniors Mariah Terry, Christin Salley, and Anotinette Broughton.  The Viking quartet placed third in the state but ran 47.76.  They should be under 48-seconds again this season… Evanston will be tough with Parker English (Sr.) in tow. The Wildkits suffered one of their leanest season’s in this event producing only a 48.31- they will be much improved this season.

4x200m relay-
2013 State Champion: Frankfort Lincoln-Way East 1:36.86
Key returning teams: Lincoln-Way East, Rock Island, Plainfield North, Homewood-Flossmoor, E. St. Louis Sr., Evanston, Chicago (St. Ignatius), Elmhurst York, Chicago North Lawndale Prep
Outlook: Lincoln-Way East ran so fast in last year’s final that it looked like they were doing a time trial by themselves. But in reality they were blowing out some of fastest teams in the nation and won by over four seconds! The crowd was so stunned that they didn’t even know how to react. As with the 4x1r the Griffins return everyone except for Aaliyah Brown.  They may not be 1:36 fast this season, but Lincoln Way-East should be good enough to be the queens of Illinois.  The rest of the lot will fight for a great year and get themselves some state and national recognition.

4x400m relay-
2013 State Champion: St. Charles East 3:50.07
Key returning teams: St. Charles East, Frankfort (Lincoln-Way East), Belleville West, Chicago Lane Tech, O’Fallon, Glen Ellyn (Glenbard West), Evanston, E. St. Louis Sr., Chicago North Lawndale Prep.
Outlook: It was a rare to see some a team outside of the immediate Chicago land area or St. Louis metro take this title but St. Charles East got the job done.  The Saints ran a smoking time to end the year and surprised a fleet of non-believers in the process. St. Charles East will be real good again despite the loss of their best long sprinter Britney Williams, who is running at Iowa State.  Junior Elizabeth Chmelik should be able to move into the anchor role now that she is fully healthy.  As for the field of nine last year in Charleston, it is going to be a chase for each position again. Evanston will be back after a year off.  The Wildkits suffered their worst relay performances since Coach Fenton Gunter took the helm. Don't expect the same outcome in 2014.  North Lawndale Prep comes to the surface in same fashion with the state's fastest long sprinter Briyahna Desrosiers. They reportedly ran a time trial and clocked 3:57 inside the tight-turned University of Chicago Fieldhouse several weeks ago. Yikes! E. St. Louis Senior returns to 3A and will be strong despite the grad loss of 2A 300H champion Markita Rush. Let's not forget Lincoln-Way East.  The third place Griffins of '13 return all four legs, but what will they do with new found sprint star Meghan Marias? She is no longer just a fill in. Decisions, decisions for a lot of teams it appears this season.

Good Luck to all!