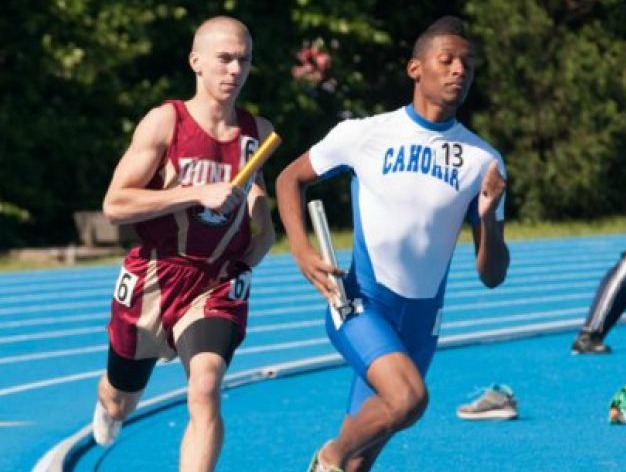 The relays will be fun to watch this season as all four events will feature traditional power Cahokia managing the food chain from now until infinity. However, there will be some teams on the scene to disrupt the flow.  The Chicago Public League is ready to shine again and put their names in the medal chase hat. Chicago Dunbar trades places with brethren North Lawndale Charter in the two sprint relays- 4×1, 4×2.  Two-time 4x1 champions Jacksonville will experience the feeling of a free fall after Reggie Bratton and gang gone to graduation.  However, relays are very unpredictable as to who will be coming back and committing to the team cause.  So let the fun begin.

4x800m relay-
2013 State Champion: Maple Park (Kaneland) 7:50.26
Key returning teams: Kaneland, Lansing (Illinois Christian), Cahokia, Stanford (Olympia), Metamora, Springfield.
Outlook: The defending state championships will have the makings of an all-time team.  It’s unfortunate that the Knights will not get to bang it out with the 3A titans at season’s end.  Senior Nathan Kucera anchored his team in only 1:54 but later ran 1:51 in the Midwest Distance Festival.  So, he without a doubt will be a premier leg in Illinois.  Cahokia ran 7:54 but lose the steady Darren Payton to graduation.  The Comanches will be a strong team because of their ability to reload year after year. Illini Christian will be a team to watch in terms of being among the top three with the Wondaal brothers Nick and Tony.  Here is a name for you to watch out for this spring that was nowhere on the radar last year: VERNON HILLS.

4x100m relay-
2013 State Champion: Jacksonville 42.54
Key returning teams: Cahokia, Plano, Dolton (Thornridge), Chicago Phillips, Chicago Dunbar.
Outlook: Cahokia ran 42.36 during last season in their leanest relay despite finishing third in the state meet.  The Comanches are expected to produce another strong unit despite the graduation of Trey Story.  Plano will bring back all four legs that made last year’s final.  The Reapers will have a special motivation in getting back to the mountain top status after not finishing the final because of a bad exchange. The Chicago Public League will have a strong presence with Phillips and Dunbar.  Dunbar will have fast Demoria Harris (Jr.) on anchor.

4x200m relay-
2013 State Champion: Grayslake Central 1:28.67
Key returning teams: Chatham-Glenwood, Chicago Phillips, Chicago Dunbar, Plano, Cahokia, Dolton (Thornridge).
Outlook: It’s almost laughable to think that Cahokia would ever get last in a relay unless they dropped or botched a baton in an exchange. They exhibited just a terrible display of team work in last year’s final that finished last in 1:34.61.  Coach Leroy Millsap wasn’t happy about the outcome from a team that ran the second fastest time in all of Illinois (1:27.96).  The goal this year will be to get the stick around the track clean and fast in the big meets… defending champion Grayslake Central will be decimated by heavy graduation losses. The Rams graduated three of their four legs including anchor speedster Davonta Jennings.  Chicago Dunbar drops into the mix from 3A and should be a factor in the point standings in May.

4x400m relay-
2013 State Champion: E. St. Louis Sr. 3:19.04
Key returning teams: Cahokia, Maple Park (Kaneland), Chatham-Glenwood,
Outlook: Once again the Comanches will be the dominant team here in their best event in which they powered to a 3:17.02 clocking. Cahokia ran 3:26 in early January with three sophomores on the unit- already proving that they will be a supreme team in the entire state. Kaneland is a team that ran well at the end of the season with a stout line-up.  The Knights return three legs from a 3:20 team that finished second in the state. Nathan Kucera will be the key runner for his team. There will be several other teams looking to make a name for themselves because of heavy graduation losses and classification losses.