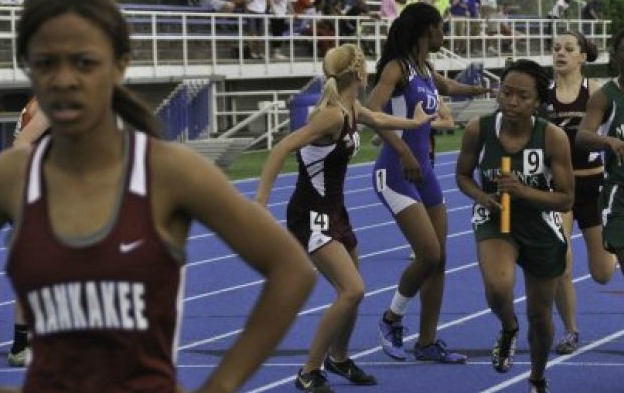 Kankakee will be on a rampage in the relays this season

The most difficult events in Class 2A to predict are relays. It seems that there are so many classification changes that it keeps the head spinning. It will be interesting to see how well Springfield Southeast will perform and load their relay units without graduated legend Charday Crawford.  Upstart Kankakee will be a team relying heavily on teamwork in their chase for a team championship.  We can’t forget the likes of E. St. Louis Senior who moved up to 3A this season.  Also, can former power Chicago Morgan Park return to glory?  This season has lots of possibilities and it should be interesting to explore.

4x800m relay-
2013 State Champion: Lake Villa (Lakes) 9:27.09
Key returning teams: Rochester, Oak Park (Fenwick), Monticello, Mattoon, Chatham-Glenwood, Maple Park (Kaneland), Peoria (Notre Dame).
Outlook: Last year’s third place Rochester team will be happy to know that they are the team to watch this season. Two-time defending state champion Lake Villa (Lakes) have been promoted to 3A. But remember that races are run on the track and not on paper.  There are seven other teams that competed in last year’s state final who return at least three legs. Fenwick would be a team that could challenge for the classification’s top honors if Olivia Ryan is on it.  The standout long distance all-star has run a few swift 800s in the past year. However, a wise man can stay wise by not picking any winners yet.  The upcoming season is a long one and sure to be a fun one too.

4x100m relay-
2013 State Champion: Kankakee 48.23
Key returning teams: Kankakee, Geneseo, Troy (Triad), Dunlap, Cahokia, Chicago Morgan Park, Springfield Southeast.
Outlook: Coach Benny Phillip’s girls stunned the track world when they pulled off the unbelievable win over Springfield Southeast 48.23 (48.224) to 48.23 (48.230). The photo finish victory may have laid a blueprint feeling of future victories to come.  The Lady Kays appear be even stronger this year through maturity of their own (three legs return) and subtraction of others (SE loses a ton of talent and classification changes.). Kankakee should be good to eclipse the 47.94 state prelim time and blow in the low 47-second range, which would put them among the bigger and faster 3A school league marks. Another team to watch will be Cahokia and the influx of young talent entering their program.  The Lady Comanches are going to be good this season.

4x200m relay-
2013 State Champion: Springfield Southeast 1:40.09
Key returning teams: Kankakee, Champaign Centennial, Grayslake Central, Dunlap, Clinton, Troy (Triad), Chicago Noble Street Charter, Chicago Morgan Park, Cahokia., Springfield Southeast.
Outlook: Once again Kankakee looks like a world beating team with three legs returning in  Jemiya Bates (Jr.), Kenyae Collins (Sr.), and Tyjuana Eason (Jr.).  The trio assisted on the 1:41.45 school record clocking.  Coach Benny Phillips indicated that he has several capable replacements fill the graduation loss of Brittany Griffin.  It will be difficult not seeing Springfield Southeast not being able to run after meet records and titles.  The Spartans have been hit hard with graduation over the past several years including superstars Brion Portis and Charday Crawford (now at Kansas State U).  Word on the street is that Cahokia, Morgan Park, and Champaign Centennial all have replacement parts to get them over the hump. Only time will tell.