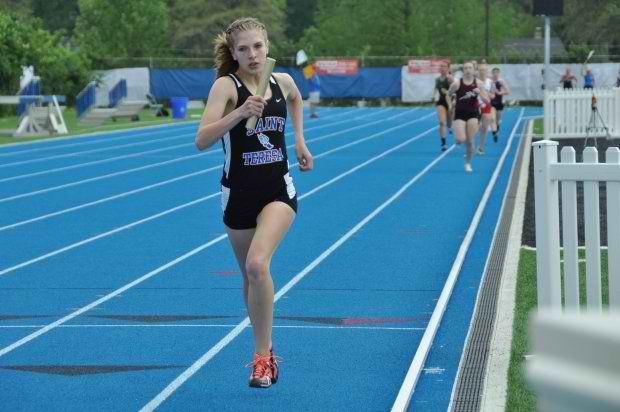 There are some folks who think relays are for the fans, as if the coaches that put together fast units are doing it for fun or to supplement their egos.  Yes, it is true that some schools pride themselves in being termed a “relay school.”  But by and large relays serve a greater purpose of scoring points that help teams score crucial points.  In Texas, relays actually count for 20 points in the state championship as to not let a superstar athlete go on a rampage.  The relays in Illinois may be the deciding outcome of the three trophies in May.


4x800 Relay-
2013 State Champion: Decatur (St. Teresa) 9:45.15
Opening arguments: From last year’s final, 10 of 12 teams return three or more from their rosters. This event should be very exciting with a lot of the same names cropping up into the finals …expect better times should the weather hold it.

Champaign (St. Thomas More) 9:48.10 (2nd overall)
A squad that finished only three seconds behind the St. Teresa cross country dynasty are no other than the legendary Sabers of Champaign. Unfortunately their cross country team missed state due to…*wah* *wah* *wah*…rough sectional placement. However, with their entire 4x8 squad of Julia Welle (So.), Randa Harshbarger (Sr.), Elizabeth Bristow (Jr.), and individual 800m finalist Regan Kelley (Sr.) all back, the Sabers are more than ready to compete with Decatur in what they truly excel at! As the best team coming back with a full roster, it’s only natural to rank them as the early season favorite.

Decatur (St. Teresa) 9:45.15 (1st overall)
The Bulldogs return three from last year’s squad: Bree Tschosik (Jr.) and individual 800m qualifiers Rachel Devereux (Sr.) and Lauren Evelti (So.). It is hard to know what to expect this year from this relay because they lose both of their 3200/1600 specialists, Ivy Handley and Megan Burgener, who they may want to replace with members of this roster. For instance, in terms of optimizing points, it makes sense that cross country ace runner Devereux specializes in the 3200/1600.

Coach Todd Vohland has plenty of options to fill in this relay based on another dominant cross country team. The main concern as to why the Bulldogs may not necessarily defend their title in this event is if their top cross country athletes focus on individual distance events and their depth in this event doesn’t necessarily go up to par with some of the speedy and specialized 800m talent that other teams will unveil.

Carthage (Illini West) 9:53.94 (6th overall)
This is another team with all their returners coming back.  The Chargers will definitely give the other top two teams a run for their money! The Illini West squad consists of Lauren White (Sr.), Mariah Brodie (So.), Carly Garnett (So.), and Jenna Bryan (So.).

Moweaqua (Central A & M) 9:54.59 (7th overall)
And of course, not at all far behind Carthage are the Moweaqua Raiders—adding to the list of the completely returning squads—with Paige Seitz (Jr.), Kylee Burcham (Sr.), Mikaela Cole (Sr.), and Salena Sloan (So.) all back.

Arcola 9:50.57 (5th overall)
The Lady Riders come back with a solid three, including Klaire Karmazinas (Sr.) plus 800m finalists Taylor Edwards (Jr.), Rylee Fishel (So.); they most certainly have the top athletes but do will they have the fourth runner depth like they did last year?

Tolono (Unity) 9:58.30 (9th overall)
The Tolono Rockets are a deep squad who is fun to watch. Watch out for Hannah Stone (Jr.), Laura Seiler (Sr.), Rhoda Brucker (Jr.), and Katilyn Stumborg (Sr.) who are all back, but there are several freshmen that might find this relay appealing. They will have to improve considerably to catch Decatur or Champaign, but with their fourth place cross country firepower this year, they definitely have what it takes!

Teutopolis 10:19.87 (12th overall)
The Lady Shoes finished a little farther back in the final race last year from the chase pack, but they should be within scoring range next year with Michelle Schmidt (Jr.), Emma Repking (So.), Elena Breer (Sr.), and Megan Weichman (Jr.) all returning.

4x100 Relay-
’13 State Champion: Erie 49.20
Key returning units with outlook:
Erie- The surprise champion Panthers return back in force to defend their crown with Courtney Cobert (Sr.), Peyton Rus (So.), Heather Strike (Jr.), and Rachel Cobert (So.). Rus is the team ace who could be moved to anchor- solidifying a dominant quartet.  All this team will need to do is get the stick around the track clean all season long.

Aurora Christian- Alyssa Anderson (Sr.), Meghan Hagerty (Jr.), and Natasha Brown (Jr.) are the holdovers of a team that placed second in last year’s state championship running 49.71. The Eagles may produce the best overall time in the classification because of their “X” factor Peyton Wade.  The senior Wade is one of the state’s most diverse athletes who unfortunately cannot fit the short relay into her plans.

Carthage (Illini West)- Coming into the state championship the Chargers were the to watch quartet as they had the best time in the classification sectionals.  They breezed through their preliminary heat on the strength of Paige Bray (Sr.), Aubrie Carlisle (So.), Michaela Gronewold (Jr.), and Graci Bastert (Sr.).

Decatur (St. Teresa)- The distance running minded Bulldogs placed sixth last year at state in 50.22.  They return Jenna Layden (Sr.), Shannen Quehl (Jr.), and Emma Reedy (Jr.) who will be ready to fight for higher position on the food chain. 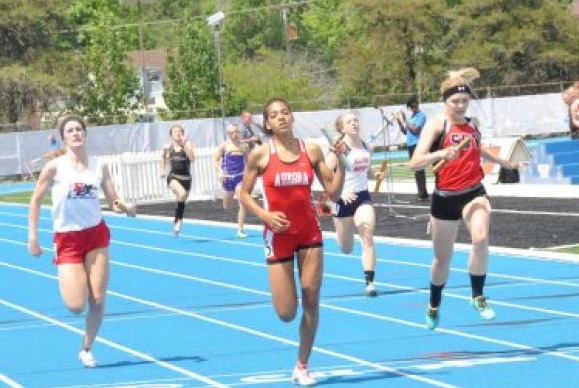 4x200 Relay-
’13 State Champion: Aurora Christian 1:43.51
Key returning units with outlook:
Aurora Christian- The Eagles showed the competition last season how dominant they were with Peyton Wade (above in red) by running a state classification best in the state championship.  Wade anchored in spectacular fashion and her mates Alyssa Anderson (Sr.), Meghan Hagerty (Jr.), and Natasha Brown (Jr.) provided ample support.  It would be foolish not to dub them as the heavy favorite to repeat as champions.

Sullivan- Mollie Bowman (Sr.), Amanda McClain (Jr.), and Emily Neuhauser (Jr.) placed second in state in 1:43.72. The Lady Redskins had their opportunity to win until Wade stormed home on anchor and snatched victory out of Sullivan's hands.

Erie- Third place state finalist team return Courtney Cobert (Sr.), Peyton Rus (So.), and Rachel Cobert (So.) that ran 1:44.03.  They may not be as strong with the grad loss of Paige Rus but they will be stout and shooting to duplicate 2013 feats.


4x400 Relay-
’13 State Champion: Moweaqua (Central A&M) 4:01.32
Key returning units with outlook:
Erie- The state team title came down to the showstopping 4x4 relay and Central A&M won by less than a second.  Their margin of victory was less than a second along with a boatload of smiles and hardware to take back home from Charleston. This season the Cardinals should be among the top three in time and performance. Look for Courtney Cobert, Corrie Reiley, and Rachel Cobert to make up an experience trio.

Williamsville- Three of the four legs are back for another run at the state title with anchor senior Rachel Rhodes coming back.

St. Joe (Ogden) and Carthage Illini West clocked 4:02.5 and 4:02.9 respectively.  Both of these teams will be tough this season.