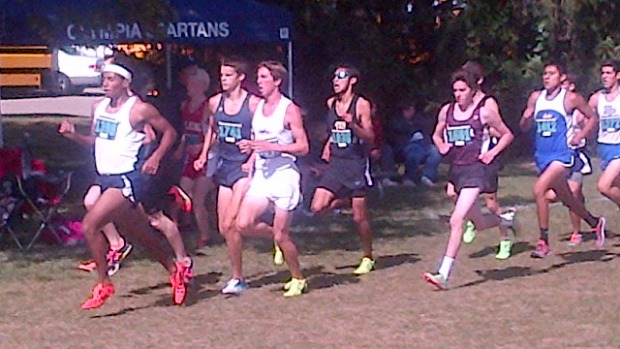 Historical Detweiller Park in Peoria was used as the backdrop on an absolutely gorgeous day to run a cross country meet (and race for that matter) that officially ushered out the summer solstice and into the second half of the season.

For the boys, it was #2 Elmhurst York in their season invitational debut routing top ranked O’Fallon 78-140.  The Dukes put three runners in the top 10 and it was essentially over the Panthers despite have top point man  senior Patrick Perrier  (pictured above) winning easily.

The girl’s theatre was just as thrilling as the boys.  Sophomore McKenzie Yanek of Pleasant Valley, IA stole the show with a surprise individual win, but her feats were not good enough to outshine #3 Palatine’s big victory over #2 Glen Ellyn Glenbard West. The Lady Pirates scored 94 points to the Hilltopper’s 159 who actually placed third behind #4 Winnetka New Trier (140).

#6 O’Fallon held serve in the fourth position tallying 224 pts.  #19 Oak Park-River Forest stepped up their game to jump into the top five with 273 pts. 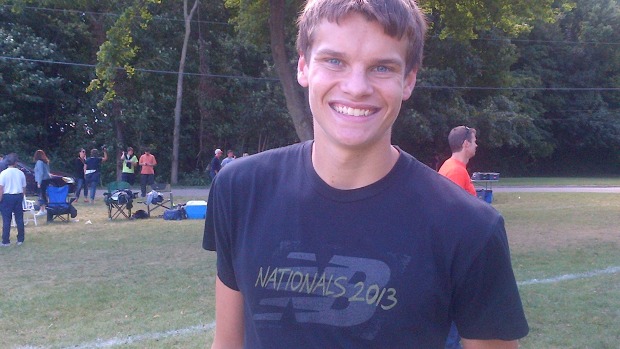 Coming into the season’s biggest meet there was plenty of chatter about who would reign supreme in the second installment of the Detweiller Park series.  The race got off without a hitch as a field of 63 teams and well over 500 runners dashed toward their personal destinations.

The opening half-mile is usually the first indicator that coaches look for in their team and individuals.  Perrier was among the leaders that hit the mark in the 2:16 and 2:17 range.  Palatine’s Graham Brown (Jr.) was there along with Dan Lathrop (Sr., Plainfield South), Joe Suarez (Sr., Plainfield East), and a few other notables were there too.

As the attention switch from the west side of the course to the east side it would be the first mile check point that everyone anticipated.  As expected, it was Perrier, Lathrop, Brown, Nolan McKenna, (Sr., Wheaton-Warrenville South) and about six or seven others coming through in the 4:46-48 range.  But the conservative pace allowed a ton of runners to stay close as the race headed to the “Bermuda Triangle.”

The team race was starting to take shape with York wearing green jerseys leading the way. Matt Plowman (Sr.), Nathan Mroz (Sr.), Alex Bashqawi (Sr.), and Matt Plowman (Jr.) were beginning to make their move at the 2k mark.  They were not in the top 30 before this point.   But by the time they exited the triangle, they all would be among the top 15.  O’Fallon did not look as fortunate during the second mile as they only had Perrier and Dorrian Gordon (Jr.) in the mix.

Perrier hit the halfway point in approximately 7:08 as he was beginning to assert himself with a surge that opened a gap.  The training runners looked strong as well and it appeared as though many of them would be able to obtain personal and season bests if they could continue to run steady for the second half.

Perrier cruised through the second mile somewhere in 9:32-33, but it was somewhat hard to tell because there wasn’t an official timer in place.  Whatever the circumstance was, Perrier was in complete control and more than 10 seconds ahead of the chase pack.

York was in complete control with less than three-quarters of a mile remaining as their trio of Mroz, Bashqawi, and Plowman were virtually side by side.  The other two scorers were in good striking range.  O’Fallon would need a prayer to pull this one out.  The Panthers best bet is hanging on to second against Hersey.

Perrier basically throttled home in no more than a hard stride in 14:24 and 11-seconds ahead of Lathrop.   Rodriguez outkicked the York duo of Bashqawi and Mroz for third place.

Perrier accomplished his mission of winning the PND Invite without overtaxing himself.  “The plan coming in was to give a pretty hard effort before going underground for the next four weeks,” said Perrier referring to more training and less racing. “I wanted to sit in the pack for the first mile… then go for separation there in the [Bermuda Triangle].”

The Dukes won their race in just as convincing fashion using a 38-second scoring spread to easily outdistance a very strong field.  Assistant head coach Jim Hedman assessed his team’s efforts as a job well done.  “We can in here and ran as well as we could,” said Hedman.  “Maybe we could have done a little better but [Kyle] Mattes hip has been a little sore and tight.” Mattes was the fourth man today who fell back during the middle portion of the race.  The Dukesters had a sophomore in Max Denning who placed second in the frosh-soph race.  Denning ran 15:14 and may be able to help his team down the road.

The runner-up Panthers may have more than gap issues between their 2-5 spread if key runner Brennan Koester (Sr.) doesn’t rebound with a recent setback with his foot.  He may have a stress fracture but the prognosis isn’t official yet.

Palatine Makes It Two In A Row Over Glenbard West

There are always a few surprises when it comes to girls cross country.  That’s just the way it is.  One would suspect maturity as the major reason.  But no one could have expected McKenzie Yanek (pictured above) of coming into Detweiller and dominating the race.  Yanek “only” ran 17:37 to place 12th a year ago.  This time though things would be very different.

The first two checkpoint indicators were within reasonable numbers in the non- Flanagan era (Lake Park sisters Lindsay and Kaylee liked the blazing pace variety) with first half-mile in 2:39 and the first mile paced at 5:29.

It wasn’t until the race entered the back loop in the north end of the stadium that Yanek made a move to separate herself and try to win it all.  Peoria Notre Dame sophomore Maryjeanne Gilbert, who was leading a short time ago, was now trailing and had to contend with the likes of Mimi Smith (So., New Trier), Glenbard West duo of Lindsay Graham (So.) and Lisa Luczak (Jr.), and several other notables.  Yanek was around 8:21 for first 1.5 miles and in control of things.

Palatine was also in control of the race during the same time frame in the back loop by using a strong display of teamwork.  The Lady Pirates locked Liz Cox (Sr.), Amy Kieliszewski (Jr.), Cassidy McPherson (Sr.), Kelly O'Brien (So.) and Jessica Lincoln (Sr.) together to control the race.  Another Pirate Sabina Yosef (So.) had to hang on and be tough running with one shoe that was knocked off just after the start of the race.

Glenbard West’s Luczak was moving well in the last mile trying to help her team but Palatine appeared to have the race locked up with less than a half mile to go with its top four and then top six looking awesome.

As for the team race, it was academic as the Pirates coasted with a seven second scoring split 18:02-18:09.  Coach Joe Park’s team had accomplished its goal of winning.  “[It] shows our depth is where we thought it was,” said Parks.  “I thought we ran very well in the varsity race, but I wouldn't classify it as great.  The times were slower than I would have predicted...not sure if that was an overall meet thing for all or if we simply settled too much once we packed up mid race.”

New Trier packed well after Smith front ran the entire race.  The Trevians used timely finishes from Kaitlin Frei (Sr.), Kelli Schmidt (So.), and Molly Schmidt who placed 30-32 to seal Glenbard West’s fate for second place.  It is clear and evident that the Hilltoppers are going to need the services of superstar senior Madeline Perez at some point during the season.