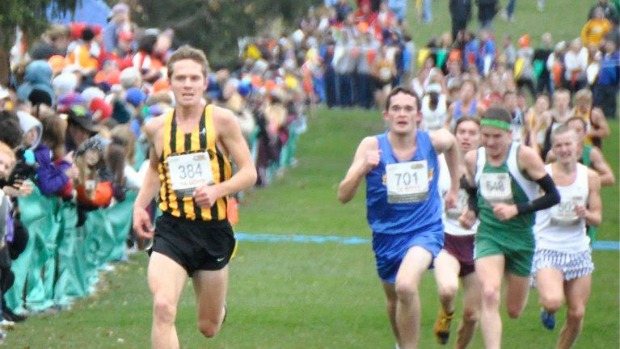 The initial thing one might notice about these cross country rankings is that off the spot, all of the finishing top 10 at the 1A state finals from last year are all graduating seniors, except for one, Nick Hess, who is the obvious favorite. Furthermore, of the top 25 finishers last year, only nine come back. So there is a lot of room for unnoticeable names to sneak themselves up into the all-state scene this year. It will therefore be not that easy to rank this year’s top 25 individuals because it’s hard to know what to expect out of a lot of the group.

1) Nick Hess (Sr.) Champaign (St. Thomas More)- As the top returner coming back from a strong 3rd place 15:01 position, all eyes turn to him as the favorite.  Hess’ track resume only suggests the same thing, for he finished second place with a time of 9:27. Unfortunately tripling up in the 4x800m relay and the 1600m made for a worn down ace. Hess did not fare so well in the 1600 prelim, but he still churned out a 4:27 (right on par with the top finals finishers) to qualify. But thinking about how many races he competed in and how well he ran in most of them makes his feats impressive.  However, don’t think he is an absolute lock because anything can happen on that big day. The intense competition is going to challenge him every footstep he makes.

2) Connor Ehnle (Sr.) Tremont- Deciding who deserves this rank, between him and Daniel Plunkett (see below) was extremely tough business.  Plunkett consistently beat Ehnle in every cross country race they faced off against last year, including state when Ehnle uncharacteristically ran sub-par.  But Ehnle has fared slightly better in track when he showed up in the finals with a 9:31/4:30 (4:27 prelim) double. Ehnle blasted out a fine 15:13 Detweiller at Dark time this summer- 21 seconds ahead of Hess. That alone makes the statement that Ehnle is running hard this summer and has what it takes in terms of fitness to beat Hess and improve even more. Whether Ehnle peaks better than last year for cross country and overthrows Hess will have to be answered on November 9.

3) Daniel Plunkett (Sr.) Pleasant Plains- If it weren’t for Ehnle’s Detweiller at Dark performance, Plunkett would have been chosen in the second position. He ran consistently on the track with a solid 9:32/4:35 double in the state finals.  In addition, Plunkett has a personal best of 15:12 on his resume.

4) Curtis Reed (Jr.) Mt. Zion- Being the third best returner at 15:12, Reed is very deserving of this ranking to say the least. You don’t always see Mt. Zion stars like him in the spot light in track because they’ve always been 2A in that sport. That class division happened to have a tough year in 2013, and he was two runners (and one place in his heat) short of qualifying for 2A finals in that event. He did run a very exceptional 1600m time of 4:25 at sectionals.  Reed should be primed for a solid harrier season.

5) Alex Pettis (Sr.) Henry (H.-Senachwine)- Fourth best returner with 15:13. No track results of note, but that doesn’t bring him down by any means, not in these rankings. Expect him to fight for a top five spot at state this year.

6) Mohammad Hosseini (Jr.) Mt. Zion- Hosseini returns as a solid harrier from last year’s state meet- clocking three miles in 15:16. Like Pettis, Hosseini didn’t produce solid track times of note, but Mt. Zion again faced the 2A dilemma on the track, and happened to run at a rather tough sectional.  Still keep an keen eye out for Mt. Zion athletes as they haven’t disappointed in cross country so there’s no reason to think otherwise of Hosseini.

7) Eric Ponder (Jr.) Tuscola- Ponder’s 15:55 state performance makes him the 28th best returner, his 7th place 9:34 performance in the 3200 shows he’s capable of keeping up with the best competition this season, and therefore deserving of a bump right behind the top five returners.

9) Michael Brown (Sr.) Carmi (C.-White County)- As the 1A IHSA 800m champion who performed a 4:41/1:55 double in the IHSA finals (ran a 4:28 prelim), Brown will look to make his way into the top caliber cross country spotlight. And considering he went all-state last year with a 15:25, he most definitely has what it takes.

10) Jon Davis (So.) Fithian (Oakwood)- One has to show the underclassmen some love in these rankings. Davis is the tenth best returner only one place from all-state at 15:27. He is getting a slight bump in the rankings, which is not entirely unwarranted since he ran a second place 4:27 1600. Clearly this guy knows how to compete in close races and therefore one shouldn’t be too surprised to find him in the top ten come November.

11) Madison Velchek (Sr.) Decatur (St. Teresa)- Velchek ran a state meet race to get himself at 15:25 as the eighth best returner

15) Michael Cook (Jr.) Kewanee (Wethersfield)- Returning with 15:43. That time alone would put him just within all-state cut off, but one cannot help but be impressed by his 1:59/4:27 showing in the 1A state finals. Expect him to step it up this cross country season as a junior looking to mature.

16) Luke Watson (Sr.) Quincy (Notre Dame)- 13th best returner also with 15:31. They don’t run track, so no track times to indicate any kind of improvement but he’s doubtless training over the summer like everyone else.

18) Nate Herridge (Jr.) Elmwood- Stepping up to the plate as the leader of a stocked Elmwood team (refer to team rankings) returning at 15:38. No matter what track results, or even early season cross country season results indicate, Herridge will be where he needs to be at state.

19) Sam Powers (Sr.) Champaign (St. Thomas More)- It’s unfortunate that the known 800m specialist didn’t make all-state this time around.  Regardless of his track season, Powers has always been a low scorer when the Sabers need him, peaking very well last year at 15:40. Count on him to be a very reliable second man on a strong STM team.

24 ) Brendan Remington (Sr.) Champaign (St. Thomas More)- Another STM veteran who returns with a 15:44. Count on him to crack into the all-state scene this year.

25) Rolando Aguilar (So.) Kewanee (H.S.)- A 9:51 3200 finalist underclassmen who looks to make major strides forward in his sophomore year.