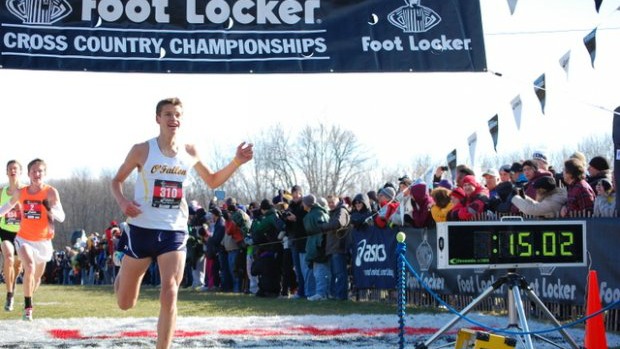 The battle for supremacy will be on this fall for the Grand-daddy classification as several key alias return to do some serious damage to area parks and golf courses throughout the fall.  Patrick Perrier will look to pick up where superstar Jack Keelan of Chicago St. Ignatius left  There will be major team implications for much of the season for many of the state’s top runners. However, the majority of Illinois’ courses are flat and fast.  So expect fast times from beginning to the end of the season.

1. Patrick Perrier (Sr.) O’Fallon- 3rd; 9:03/4:12/1:54- The state’s top returner will have nowhere else to go but up.  Perrier has been on the distance running crazed Prairie state fans minds since his sophomore year as the ultimate goal is to help his team win its first state championship.  But of course, taking the individual title would be icing on the cake for a young man who was under the tutelage of the great Alex Riba for several years.  Keep in mind that he has all the tools physically to be the very best runner in the entire state based on a strong resume that ended in San Diego last year.  This season Perrier will enter every big competition with ice water veins and blaze like the champion that he is.  The post-IHSA season should take him to NXN and Footlocker tours that end in mid-December.

2. Jesse Reiser (Jr.) McHenry- 7th; 9:05- Reiser hails from the far northwest sleepy suburban town but has plans to awaken an entire state this season.  Before Reiser takes his next big steps toward glory, let’s not forget that he blazed 14:33 on the grass last year.  In addition, Salvano earned a 7th place medal in the 3200m final that signaled he is here to stay.

4. Nolan McKenna (Sr.) Wheaton-Warrenville South- 30th; 9:03- This young man is leaps and bounds better than he was last year when ran a whopping 14:51 at state.  As good as that was he should be a mile faster this season.  If any of the above candidates slip up he could be the state champion and beyond.

5. Steven Salvano (Sr.) Buffalo Grove- 9th; 9:19/4:28- Salvano burst on the scene in his race last year in winning his season opener at the Fenton Invitational.  He would later score low in big meets and those competition leading to a great junior year.

6. Zach Dale (Jr.) Hoffman Estates Conant- 9:12/4:28- He didn’t advance to state xc last season but matured mightily during the track season which produced a top five mark in the 3200m during the regular season.  Dale would eventually go on to place 15th overall in 9:21.  He is far from toast in a quest to be an elite runner this fall.

7. Dan Lathrop (Sr.) Plainfield South- 28th; 9:17- In case you didn’t notice but Lathrop’s coming out party actually started in last year’s section one final of the 3200m in which he won and put pressure on the championship section to be honest in their racing.  In other words, it was going to take at least a very solid 9:17 to earn one of the top nine all-state medals.

8. Kyle Mattes (Sr.) Elmhurst York- 23rd; York’s top returner is expected to have a bang out season despite missing the entire track season to an injury.  Coach Jim Hedman indicated that Mattes is ready to go this fall.

9. Joseph Suarez (Jr.) Plainfield East- 19th; 9:25- The time 14:44 is nothing to sneeze especially if one is returning for two more seasons.  Suarez has quietly produced some great numbers on the track and grass.

10. Billy Magnesen (Sr.) Hinsdale Central- 32nd; 9:25- Magnesen should be ready to have an outstanding senior campaign after running 14:53 last year.

11. Nathan Mroz (Sr.) Elmhurst York- 9:22/4:19; The Dukes return one of their most coveted athletes who missed the ’12 season due to a broken foot according to Coach Hedman.  The slow grind back netted great hope as Mroz was able to run 9:22 near the end of the track season.  More importantly, he advanced to state in the 1600m and gained some valuable state meet experience.  Watch out for this kid this fall.

12. Graham Brown (Jr.) Palatine- 41st; 9:26/4:19- Brown has steadily put up some good numbers in his first two high school season.  It is a sign that he is progressing toward becoming one of the Pirates all-time greats.

13. Dorrian Gordon (Jr.) O’Fallon -42nd; Gordon is almost in the same class as Palatine’s Graham Brown except he has taken more of the middle-distance approach to success.  However, after a super summer of training it is very conceivable that he could land among the upper echelon.

14. Dan Lupano (Sr.) Lagrange Lyons Township- 39th; Lupano just dipped under the watershed mark at 14:58 at state last year.  He moves into the top spot after holding down the #3 position last year.

15. Andrew Philipose (Sr.) Arlington Heights Hersey- 70th; 9:22- He and teammate David Rodriguez will be a force to be reckoned with similar abilities.  Philipose is more of a longer distance runner and that should translate well on the grass.

16. Nick Bushelle (Sr.) Naperville Neuqua Valley- 31st; 9:23/4:25- Bushelle will be the main man this season for the Wildcats despite suffering an illness earlier in the summer.  According to his coach Paul Vandersteen all is well.

17. Austin Weber (Sr.) E. Moline United Township- 9:34; An all-state athlete in 2A last year, Weber is a legit runner who shouldn’t have any issues fitting in to his new league.

18. Peter Costirilos (Sr.) Winnetka New Trier- 4:18; An enormously talented runner who hasn’t been able to excel to his full potential because of some serious injuries over the past two seasons.  It wasn’t until the end of the track season that New Trier coaches exhaled.  It basically meant that Costirilos may turn the corner and will be ready to finally roll this fall.

The best of the rest in no particular order: