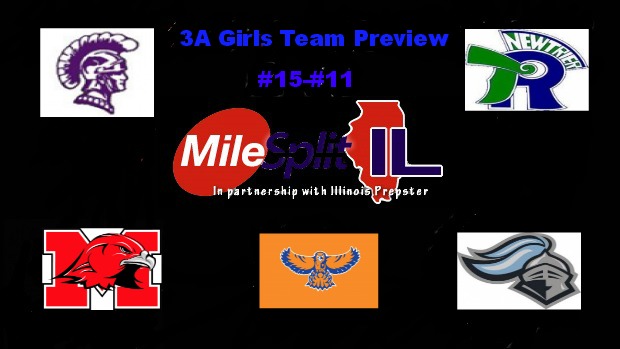 Our preview continues with the likes of Hoffman Estates, Maine South, and Downers Grove North.

Team outlook: Coach Kirk Macnider touts his unit as one of his most talented groups after such faces as Solome Haile (all-conference xc), Meagan Biddle (5:02-1600m), Yazmin Nunez (11:37-3200m), Reena Prahbu (5:35-1600m), Elsabet Haile (state 4x8r leg), and Alonda Aguirre (2x all conference xc) had great track seasons. “We are running as many miles and faster than any previous team I’ve had,” said an ecstatic Macnider who wasn’t satisfied with last year’s season end. “On paper, this is one of the most talented returning groups I've ever coached. They are hungry to compete with the best at State.”

Team outlook: Losing three all-state runners over the past two years in Laura Maibuecher, Brooke Wolfe, and Lauren Poplawski has changed the complexion of the team.  We will be much more of a “pack” team, with a lot of quality runners, without any superstars unless Christina Santiago comes out [from tennis]. The team’s summer training was so-so – Hannah Getschman was in Michigan with family all summer, but ran better than last summer; Katrina Leeney was hurt and cross trained all summer; Maggie Sullivan has been slow rounding into shape after soccer season.  Others have done well. Coach Dave Wurster is entering his final season as head coach and wants to go out in style by putting together a strong team in every invitational, with a focus on the placing in the top two of the mighty MSL Conference, sectionals, and of course another top 10 finish at the state meet. The key to reaching such goals is staying healthy, having a great attitude, and working together as a team.

Newcomers:  Sirvinskas is new to cross-country after having a great freshman season in track as a middle distance runner.

General season outlook: It will be difficult to approach the success of last year's team.  Emily Leonard, who has been one of the state’s top harriers over the past few years, had a nagging ankle injury that bothered her for most of the spring through early July, so her training has suffered. She has started to run again, and attended the first week of the UW-Madison Camp of Champions with a few of her teammates, but she is definitely behind where she was hoping to be at this point. Hopefully for her team’s sake, she will be able to return to one of the top ten slots by season’s end. There are some question marks that have to be answered before this team can obtain their place among the elite of Illinois. Mirae Mastrolonardo, who was the team’s third runner at the end of last season, is a top figure skater, has had some health issues. Gina Johnson is a top-notch tri-athlete following a trend of multi-athletes who sometimes exchange running for the other disciplines.  Still, Coach Jeff Downing stands by his horses with the following assessment:  “We are optimistic about this year’s squad.  After having a good bank of summer training, we hope to have another solid season in our conference (CSL), and make another run at the state meet.  After finishing in 10th place last season, we should be hungry to qualify again and attempt to finish even better this year.   We have four of our top five returning that should assist us greatly in meeting that goal.  We have qualified in four of the past five seasons, so we want to make it five out of six.”

Projected top 7:  “We lost three of our top four so it will be difficult to predict [our real line-up] until we see this very large group of younger runners race for the first time”, said Coach John Burnside.

Newcomers:  “This is perhaps our deepest group of incoming runners, several of whom have some real cross country experience’, Burnside offers.  “Katie Glew, Grace Fagan, Helen Fagan, Kelli Schmidt, Cara Keleher and Caroline Fix are very strong runners.  Kelly Frentzel, who ran track for the first time as a junior may also run for us this year.”

Coach BurnsideTeam outlook: “Losing leaders like Courtney Ackerman, Jessica Ackerman and Kathleen Keene is going to hurt...a lot.  They are irreplaceable on many levels.  Since we cannot replace what we lost, we must move in a different direction.  We will continue to depend on the Mimi Smith as we have for the past two seasons.  She continues to train well and has developed into a gifted leader.  We will need to make greater use of effective pack running this season and develop our younger runners into consistent scorers at the high school level. The girls are focused on competing with the best Illinois has to offer once again this season.”

Team outlook: The Trojans endured an awful 2012 campaign that mercifully ended in 8th place at the Marist Sectional.  However, Coach McDonald’s girls regrouped and had an outstanding track season collectively.  Most of the returning cast produced solid marks that set them up for a much better cross country season.  One notable highlight was the 4x800m relay placing 8th at state in 9:21.71. Watch out for Stephanie Urbancik, Meghan Bonfield, and Grace Maletich to have outstanding seasons this fall.

Season goals by Coach McDonald: “Our summer training has been very good.  Last fall was a bit of a disaster in terms of injuries, so we made some minor adjustments to our summer training schedule that will hopefully pay off at the end of the season and allow us to get our top 7 runners to the line healthy. I think at this point we simply want to be more competitive.  As a team, we were disappointed in the fall of 2012.  No excuses, we just did not perform at a high level consistently.  Obviously, we would love to finish 2nd in conference (nobody in the WSC-Silver is going to touch Glenbard West) and qualify for the state meet, but at this point our focus is to simply improve week by week.  We should be a competitive team.  How good, I am not sure.  I think we will know a lot more by the middle of September.”