There is no doubt that the 2013 outdoor campaign is one of the most trying seasons in years.  It could be described as the “season from hell” on most days with the terrible weather that Chicagoland had to endure.  The latest saga was Prospect Stadium lights not functioning. The meet schedule would have to be altered to get the meet completed before darkness.
But as always, the 45th Prospect Wanner Invite provided great performances. 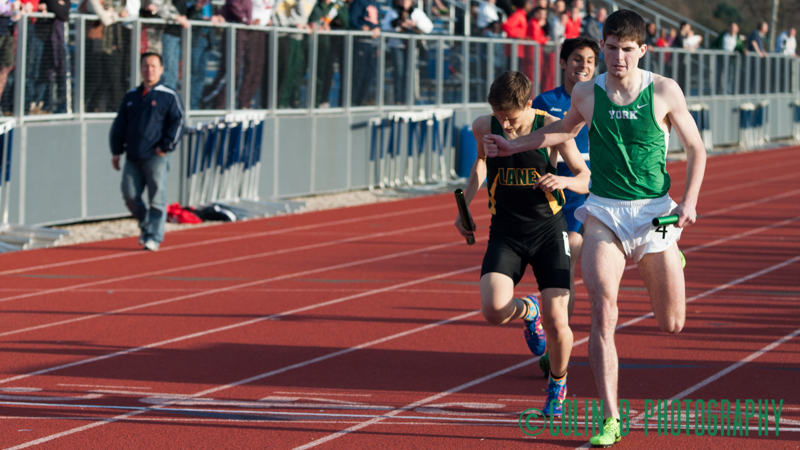 Elmhurst York               7:56.89- [1:56.4, 2:01.3, 2:00.5, 1:58.7]
Chicago Lane Tech        7:57.00- [1:59.5, 2:00.1, 2:01.1, 1:56.5]
LaGrange Lyons Twp    7:57.48- [1:56.9, 2:01.9, 2:01.2, 1:57.2]
Mt. Prospect (Prospect) 7:57.94- [1:59.7, 2:01.3, 2:00.2, 1:56.7]
Chicago (St. Ignatius)    7:59.88- [1:59.1, 2:00.1, 1:58.5, 2:02.3]
Summary: Year after year there is one event that can be counted on at the Prospect Wanner Knight Invitational.  And that event is the 4x800m relay.  It’s probably because the coaches know how to disperse the influx of depth in this distance rich state.  York and Lyons Twp. would be the first two schools to test the 8:00 barrier.  The Lions led off leg with Connor Delaney who got out well in 56.5, and a short distance behind him was York’s Jack Achen.  The chase pack followed about a second behind the pair.  By the end of the first leg, it was York and Lyons Twp. solidly in front by nearly three seconds.
The lead did not last very long as two other schools joined in the fun at the first 200.  Arlington Heights Hersey and St. Ignatius locked horns by the end of their first 400. On the second circuit, St. Ignatius surged to the front on the backstretch and appeared to seize the momentum of the race.  But somehow this evenly matched field was not going to go anywhere.  York regained controlled of the situation and readied themselves for the third exchange.
The Dukes once again come across first and Lyons second.  York’s Alex Baughman motored fast in his opening 150.  As he set his pace to auto pilot Hersey’s David Rodriguez caught up him and surged ahead and continued his momentum onward.  Rodriguez was committed.  Instead of tucking in and siphoning energy off of the York leg, he wanted to push the pace.  Rodriguez would begin to fade badly with 300 remaining on his run.  York, St. Ignatius, Lyons Twp, Lane Tech, and Prospect moved ahead of him and on to the final exchange.
The anchor leg saw St. Ignatius and York push out ahead of the field as though they were going to cash in their chips.  It was York and St. Ignatius in control with less than a lap remaining.  However, there was less than 200 remaining and things began to close up around them.  Lyons, Lane Tech, and defending champion Prospect was coming.  The crowd was on its feet and the cheering athletes and coaches down on the field did they part as cheerleaders.  Lane Tech’s Pavlo Hutsalyuk sensed victory and turned on the jets.  Hutsalyuk moved even the Dukester with less than 50y remaining, but could not get a step in front.  Both runners hit the finish line virtually even.  York was awarded the win in a new state best 7:56.89.  The defending state champion with a new cast ran a season best 7:57.00.  In all five teams broke 8:00.  Perhaps, lost in the shuffle was the all sophomore corps from Chicago Jones.  The young Eagles ran an amazing 8:06.20.  Indeed the future is bright for Coach Andrew Adelmann and crew.  This is what happens when quality weather is present. 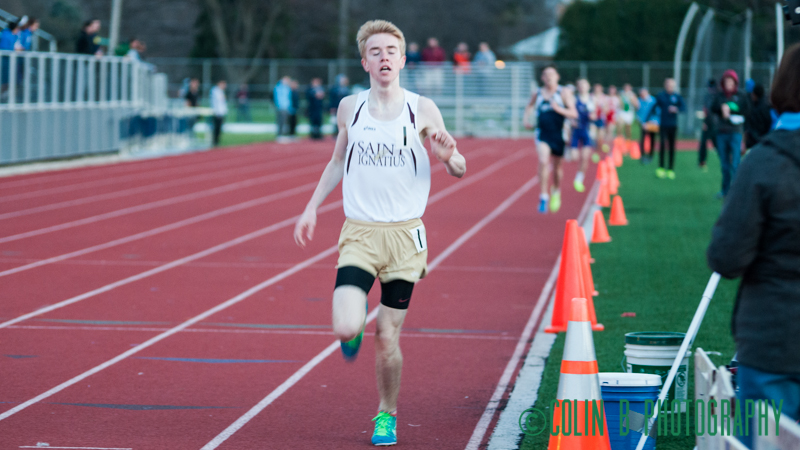 The pre-meet build up was all about Jack Keelan (Sr., St. Ignatius) and Jamison Dale (Sr., Jones).  The two stallions had previous squared off at St. Ignatius where Keelan used a late kick to win in 4:15.1.  So what would the outcome be this time around?
Keelan did not waste a second once the gun sounded.  Perhaps, it was of urgency to get the race in due to the impending darkness.  At any rate, Keelan led the deep field that featured many of the state’s top distance runners in 63.9.  The entire 13 runner field was still in striking distance.
As the race moved in the second 400, Keelan continued to lead Dale and Micah Beller (Sr., Niles North).  The pace began to pick up more and the chase pace was left to fend for themselves.  Dale moved slightly in front as the 800 mark neared.  Keelan’s body language looked fine but Beller appeared to be teetering.  Dale hit the half in 2:06.4 and Keelan virtually even at 2:06.9.
The race was about to begin and Dale’s brief lead would also be history. Keelan outlasted a short bout with Dale before taking the lead for good at the 1000 mark.  That action seemed to sting Dale and it certainly put away Beller in terms of trying to steal a late victory.
At the gun lap, Keelan had all of the momentum and he rode it.  Dale was still holding on, but it was clear that Keelan was going to break the meet record of 4:14 and possibly dip under 4:10.  The lead widened on the backstretch for Keelan and the rest of the field was in time for some very good times if they all could manage to navigate the twilight and see the finish line.
Keelan kicked home hard in a new meet and stadium record 4:09.62.  Dale also ran an excellent race producing another personal best 4:14.80.  Beller finished strong in 4:17.36.  The previously injured Quentin Shaffer (Sr., Prospect) ran his lifetime best of 4:20.32 to place fourth.  Shaffer has quietly gotten himself back into the state distance talk.  He ran a strong anchor earlier in 1:56.  “My goal at this point is to get in shape to the 3200 and 1600 at state,” he said.

Dave Kendziera (Sr., Prospect) has run very fast this season but they were of the hand held variety.  So, when he had his chance on the big stage that the Prospect Wanner provides he took full advantage of the situation.  The 110HH prelims were up first and he notched a fast 14.23 nwi clocking.  But the mark was FAT and it put the bed that he was suspect.  Meanwhile, his chief competitor Matt Harris (Sr., Lyons Twp.) ran the second fastest time in 14.80.  The short turnaround from the prelim to finals didn’t seem to affect Kendziera at all.  He rocked the field in 13.9 unofficially- sending a tremendous buzz throughout the crowd.  The official reading was 14.06 and well ahead of Harris’ 14.60.  There was a strong tailwind but the time and effort was marvelous.
The 300H was just successful for Kendziera who led through each hurdle winning over Lino Mogorovic (Sr., Lyons Twp.) 38.45-38.97. Kendziera just seemed to be so fast and swift over the hurdles- great technique and precision that is going to carry him to big things when the calendar moves to May.

Other meet gems to ponder-

One of the featured races was supposed to be the 400m featuring the state’s top long sprinter Malik Harrison (Sr., Springfield).  But somehow he and his race got lost among the distance carnage and the upcoming darkness.  Little did Harrison know he was going to have his hands full.  Lane Tech’s Tony Abreu got out very well and actually broke the stagger on the field as he was in lane 7.  Abreu continued to move hard as the race hit the homestretch.  It was just after the 300 mark that he began to hit rigor mortis.  At the last point of attack, Harrison finally emerges into the lead and appeared to be heading to victory.  Unfortunately, for Harrison, it was Sam Bransby (Jr., Naperville Central) who pulled ahead for the state leading victory 49.14.  Harrison finished second in 49.34.  Abreu continued to take a few lumps and faded into a disappointing fourth 50.82.
The throws battle between Matsen Dzierdzic (Sr., Libertyville) and James Torgerson (Sr., Springfield) was supposed to be one of the key battles of the day.  Instead it turned into a dud.  Dzierdzic easily won the discus throw with a new personal best effort 158-4.  Torgerson on the other hand scratched all four of his throws.  He was slated as the winner.  Dzierdzic made it a double winner in the shot put with another personal best 59-5.  Torgerson putted 55-7 for second place.
Matt Harris did actually get the best of Dave Kenziera… in the long jump winning 23-6.5 to 22-9.5.
Lastly, Zach Dale (So., Hoffman Estates Conant) used a late surge in the final 300 to defeat York’s Chris May (Sr.) 9:24.82-9:29.54.  May did most of the work with splits of 4:46, 6:00, 7:13 and 8:22.  He complained of a sore ankle that got the best of him somewhere on bell lap in which he could not sprint on his toes.
York took team honors with 122 points. Lyons finished second with 97, Prospect 73.