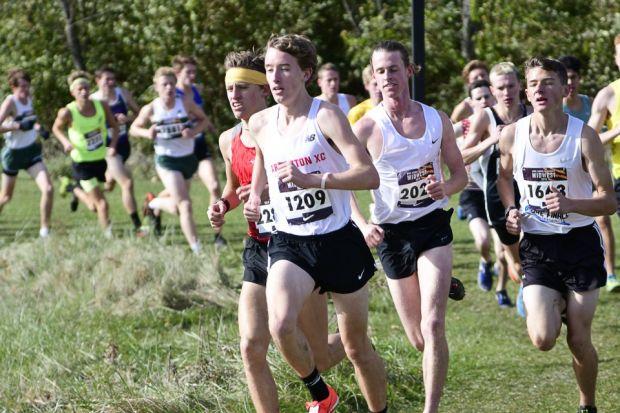 It was a great team and individual battle with Josh Methner vs foes; Hersey vs teams

Finally, we make it to the most important races of the day, the championships, the race that could qualify you for a spot at the national championships.

First up the boy's race. Here we were bound to see some of the best teams from IL go at it for one of those two team spots and potentially an Indiana team attempt to sneak in there. On the individual side, it looked like the stud Cole Hocker was going to do his thing and have little problem with grabbing another win on the season. One boy that was sure to be missing in the race, was Conant Smith from Ohio, who was unable to make the trip after the state meet. He will surely be an athlete to watch to potentially earn one of those new individuals at large bids.

Through the first mile, Indy Cathedral senior Cole Hocker and Hersey IL junior Josh Methner led the way going about 4:43, with Methner taking the lead at the 2K mark, roughly a stride ahead of Hocker. Not much longer after that, Hocker took back over the lead at the second mile, coming through in about 9:45, just a heel strike ahead of Methner. Hocker managed to find his usual groove of being in the front after that and held on to his slight lead, managing to extend it just slightly, coming across in 15:06.4. Methner held on to 2nd coming across in 15:12.1. Eight seconds behind him came the first Michigan runner, Corey Gorgas in 15:20.8. Howland OH senior Vincent Mauri and junior Ethan Kern of York IL rounded out the automatic individual top five pool.

The team race as they came across looked like it was going to be US #3 Wheaton Warrenville South's, but a surprise came as the awards were being announced. #17 Hersey IL managed to pull off the win with 146pts to WWS 149pts. Having that low stick in Methner and their 4-5 runners really stepping up proved to be the game changers for them to earn a trip to the national meet. The top 5 boys teams all came out of Illinois: York 156 pts, Neuqua Valley 162 pts, and St. Charles East 181. Cathedral from Indianapolis took sixth.